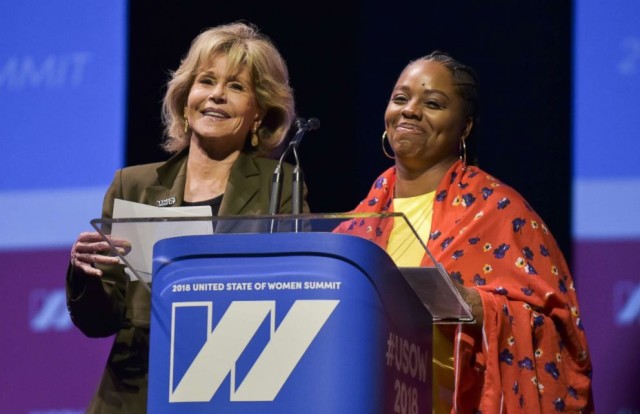 A few weeks ago, the United State of Women’s Conference was held here in Los Angeles and I spoke to the 6,000 women together with Patrisse Cullors, co-founder of Black Lives Matter. This is how I started my speech:

“When Trump was elected and the toxic bedrock of White Supremacy in this country was exposed, I realized something new. I’ve been involved with progressive movements most of my adult life, but because I’m White, the lens through which I had been looking at race was too shallow. So I’m studying. It takes more than empathy, it requires intention to even begin to comprehend what people of color, no matter their class, face every moment of every day, and how much privilege, quite unconsciously, is enjoyed by those of us born White–even the poorest of us.”

After I spoke, Patrisse gave a very moving speech about mass incarceration and her brother who suffers from mental illness and was incarcerated and brutalized.

Here are the names of some of the books I have been reading in my effort to more deeply understand race and racism: “The New Jim Crow” by Michelle Alexander, “When They Call You a Terrorist” by Patrisse Cullors, “Between the World and Me,” “The Beautiful Struggle” and “We were Eight Years in Power” all 3 by Ta-Nehisi Coates and the great Zora Neale Hurston’s 1927 book “Barracoon: The Story of the Last ‘Black Cargo’” which has just been published with a forward by Alice Walker. Fascinating and moving. Hurston interviewed a former slave who remembers his life in Africa before he was taken prisoner and shipped to this country. How rare is that? There are more but I’ll stop there.

It has become clear to me as I study, that multiracial coalition-building is what the ruling class, the corporate elite, are the most afraid of. Right before he was assassinated, Martin Luther King was organizing a multi-racial Poor People’s March on Washington to bring economic justice regardless of race. This is what Reverand William Barber and his Poor People’s Campaign is attempting right now. It is this fear of multiracial unity that explains why Trump and his surrogates play the racist card at his rallies and in his policy proposals. Poor and working class Whites must be made to believe that they have privileges and advantages not afforded Blacks. That is why affirmative action, Food Stamps and Welfare are so hated by Whites who have lost their union jobs and sense of identity. They are made to believe people of color are cutting in line ahead of them. This belief is what is pushed by Trumpism. It’s the age old divide and conquer strategy.

What we need to do now is stop turning a blind eye to what’s really happening and help each other understand how racism has caused centuries-long suffering and severe disadvantage to people of color that continues today, particularly for African Americans who Whites were made to believe were not even human in order to justify slavery while still calling ourselves a Democracy. Though it’s more subtle now, Blacks continue to be prevented from enjoying the same rights and privileges Whites do. It is our colorblindness and, dare I say our willful laziness that keep us from seeing the segregated, horrifically unequal schools, the communities redlined by banks to keep Blacks out, the deliberately created food deserts and segregated ghettos where militarized police round up Black and Brown people for drug crimes that Whites are forgiven for.

When the Civil Rights Movement made gains in the ‘60s the white power elite decided to create a new Jim Crow that would not appear racist. They called it the War on Drugs. In the ‘70s Nixon’s National Domestic Policy Chief, John Ehrlichman, said this: “We knew we couldn’t make it illegal to be black, but by getting the public to associate the blacks with heroin and then criminalizing them heavily, we could disrupt their communities. Did we know we were lying? Of course we did.”

In Michelle Alexander’s “The New Jim Crow” we learn that in 2 short decades, between 1980 and 2000, the number of mostly Black and Brown people incarcerated in our nations prisons and jails soared from roughly 300,000 to more than 2 million. By the end of 2007, more than 7 million Americans, one in every 31 adults, were behind bars, on probation, or on parole. This huge increase was not because crime increased but because of new laws and new instructions to police officers and prosecutors that result in extraordinary persecution and violence against people of color while appearing to be race-neutral. This has become the way to create a racial caste without ever appoearing racist. Every year more than 650,000 people are released from prison, including people with mental disorders and those whose only crime is drug addiction or possession of a small amount of recreational drugs. Again, these mostly Black and Brown people are “barred from public housing by law, discriminated against by private landlords, ineligible for food stamps, and find themselves locked out of the mainstream society and economy permanently.” Following incarceration unemployment is 50% higher for African-Americans and Latino men than white men. They did not create these conditions for themselves. The meager public assistance they receive can hardly be considered “cutting in line.” Whites have no reason to feel entitled. Our privileges were provided us at the expense of other human beings. To begin to heal from this cancer that continues to metastasize within our country, we need to acknowledge the historic harms that have been suffered by communities of color and the racism in the criminal justice system that continues today.

A rising tide doesn’t lift all boats, not the ones tied to the bottom of the ocean by racist laws and policies. What we must admit is that the far right, the Koch brothers, the Trumpists, the Steve Bannons and, yes, even some neo-liberal- Wall-Street-apologists who make sure Blacks and Browns are marginalized are the same ones who also hurt the poor and White working class by weakening labor unions, not coming up with new job development and infrastructure improvements in areas where mines and factories have closed. Once we can see that we share a common enemy, we can truly begin to unite to fight for social, political and economic equality.

Sure, some people are deeply racist and some love Trump because they think his policies will make them richer. But there are those millions of other Americans who believed his promises of jobs, of a better life, better health care, better schools. Ask them how they feel that’s turned out for them. Help them understand that there is strength in numbers and if all the people, of all ethnicities, races and genders who feel screwed and forgotten join together with a vision of a future worth fighting for we can achieve it.