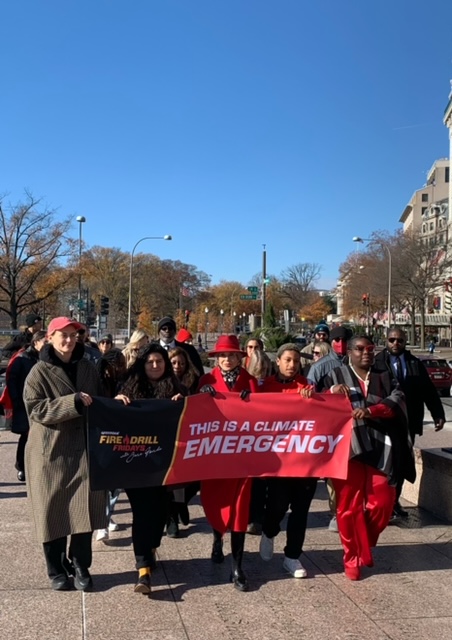 Last week I was told by my oncologist that my cancer is in remission and I can discontinue chemo. I am feeling so blessed, so fortunate. I thank all of you who prayed and sent good thoughts my way. I am confident that it played a role in the good news. I’m especially happy because while my first 4 chemo treatments were rather easy for me, only a few days of being tired, the last chemo session was rough and lasted 2 weeks making it hard to accomplish much of anything. The effects wore off just as I went to D.C. for the first live, in-person Fire Drill Fridays rally. Thank heavens for that because it was a busy week. Besides the rally, I did some lobbying and spoke twice at the Democracy Alliance all in an effort to stop Senator Joe Manchin’s side deal which climate activists call the Dirty Deal. This deal, called ‘permitting reform,’ seeks to fast track fossil fuel projects, does great harm to bedrock environmental protections and curtails the public‘s ability to have input, basically throwing marginalized communities disproportionately burdened by fossil fuel pollution under the bus.

Equally important, this corporate giveaway to the fossil fuel industry is a slap in the face to the record number of young voters and self-identified climate voters who came out in record numbers for the midterms. Democrats courted these voters and should remain accountable to them. No member of Congress can profess to support environmental justice while supporting Senator Manchin’s and Senator Schumer’s effort to silence any opposition and condemn low income, largely brown and black communities locked into fossil fuel created sacrifice zones.

400 health professionals joined in raising both the public health and climate risks of this dirty deal, along with the President of the American Lung Association.

In September, 11 leaders of environmental, labor, and EJ organizations were arrested for protesting the deal which was defeated on the first attempt and then brought back by Senators Manchin and Schumer a 2nd time. It was defeated again but last week we learned the senators were trying again to attach this horrific side deal to another bill.

Please call or write your senator(s) demanding they oppose this Dirty Deal.

Thanks for doing that and thanks for sending good wishes my way.

I wish everyone a joyful, healthy Holiday.