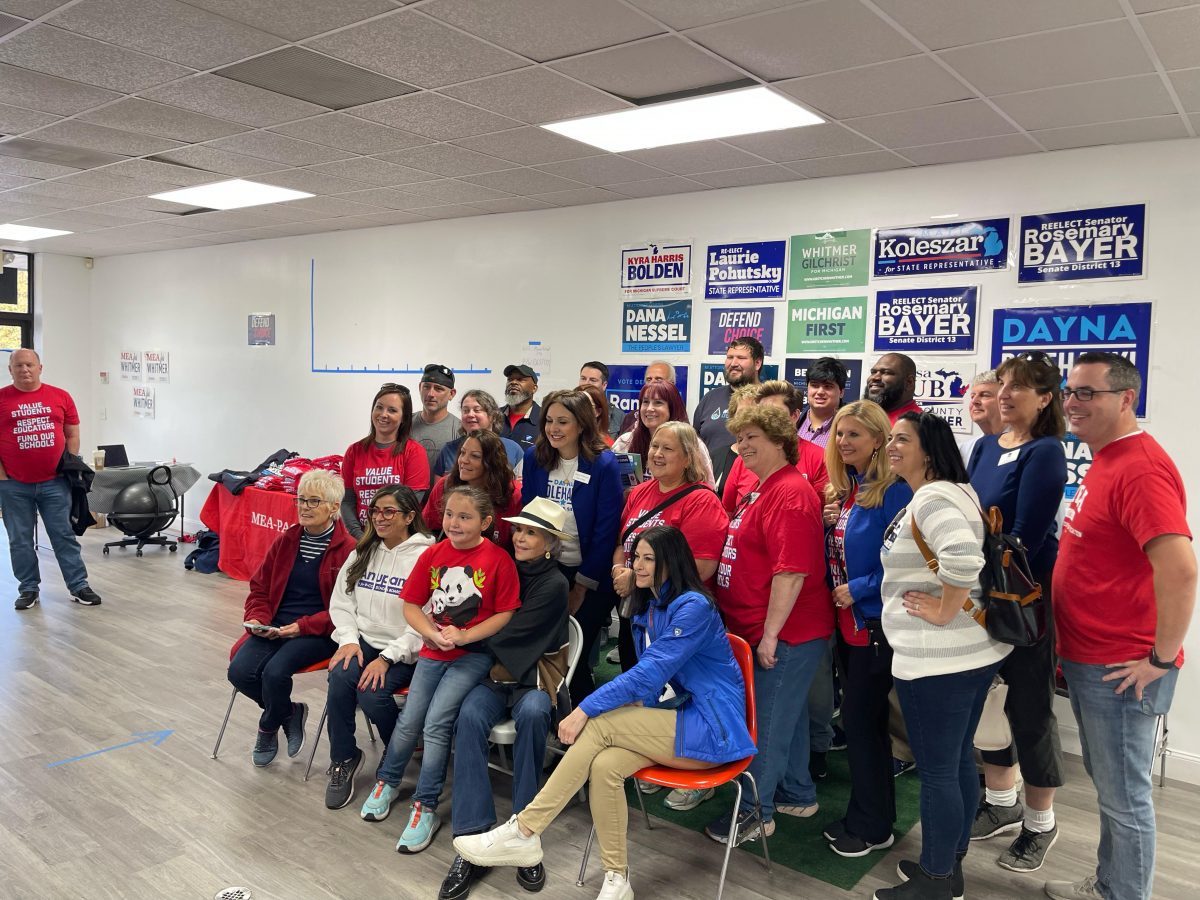 It has been absolutely thrilling to be out on the campaign trail in support of brave climate champions running for office up and down the ballot all over the country that the Jane Fonda Climate PAC has endorsed. It fills me with hope and inspiration and my lymphoma is not going to stop me. This election is too important.

Last March I launched my PAC with one laser-focused goal: Do what it takes to defeat fossil fuels supporters and elect climate champions at all levels of government.

Over the past three years, my weekly Fire Drill Fridays (virtual since Covid) have built a strong following of 11 million people across all platforms who are learning to be activists. But time is running out to avoid the worst-case climate catastrophe and the stranglehold that oil, gas, and coal companies have on American politics is keeping us from passing laws that will save the planet…and us.

And so, while I continue my important Fire Drill Fridays, I realized we need to move the fight to avert a true climate catastrophe into the electoral space because too many people in office, Democrats as well as Republicans, take money from the fossil fuel industry and therefore block important climate legislation created the climate PAC.

We will never have the kind of funding the Koch Brothers have but we have huge numbers of on-the-ground activists everywhere who know the candidates that will work for people and not big corporations my PAC team is very experienced; and we have influencers and celebrities willing to use their platforms to help. And since we are currently focusing on down ballot candidates, every dollar really goes a long way.

What I’ve discovered and what I want to share with you, is that candidates who wield a lot of power over the use of natural resources and control energy budgets are often found in positions you’d least expect. For instance, last week, I campaigned with a true rising star in New Mexico, Stephanie Garcia Richard, who is running for re-election as Public Lands Commissioner, the first female, Latina and educator to hold that position. 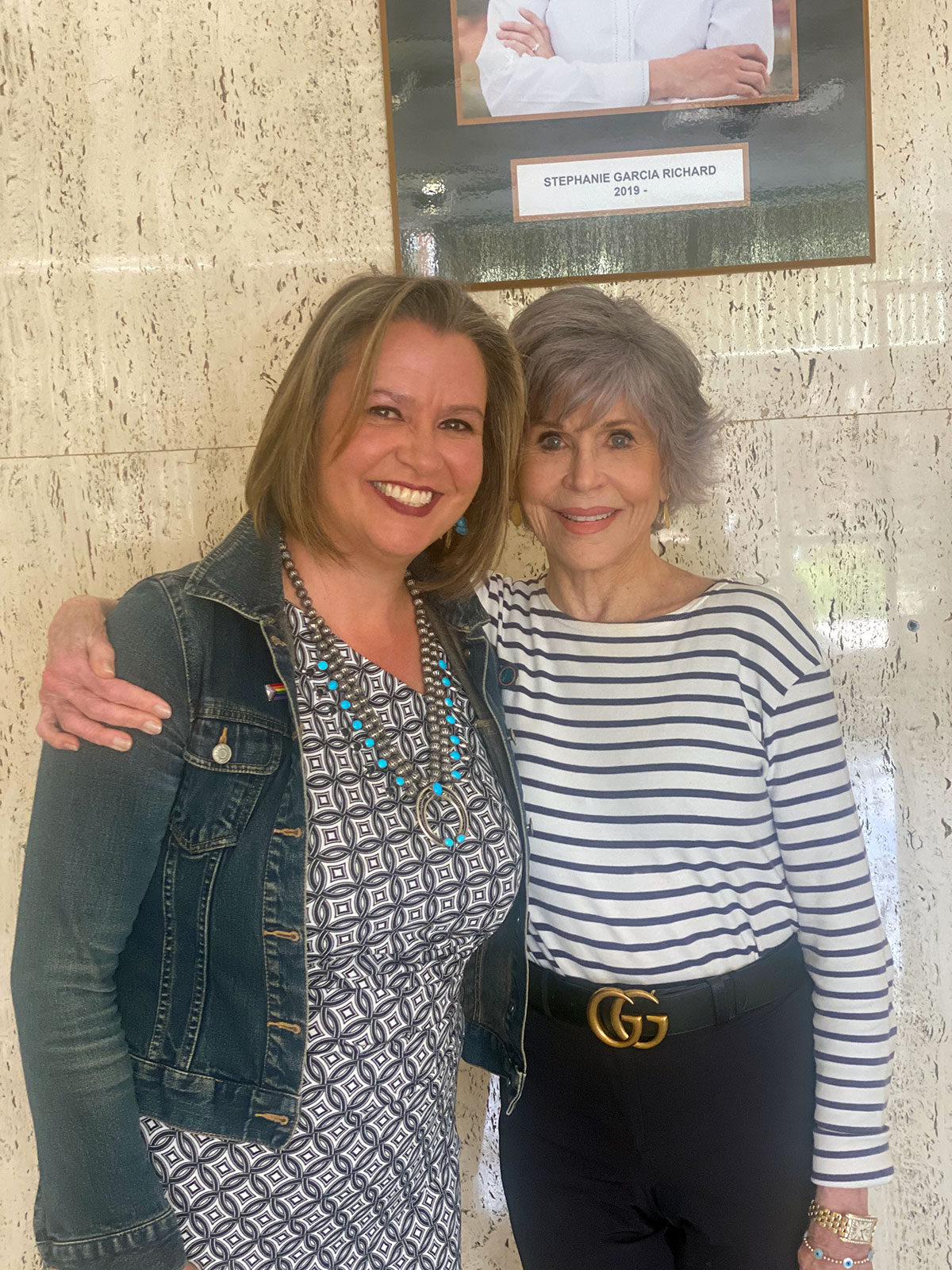 Stephanie has signed a contract to bring the largest wind farm in the western hemisphere to New Mexico and wants to make her state a national hub of renewable energy. 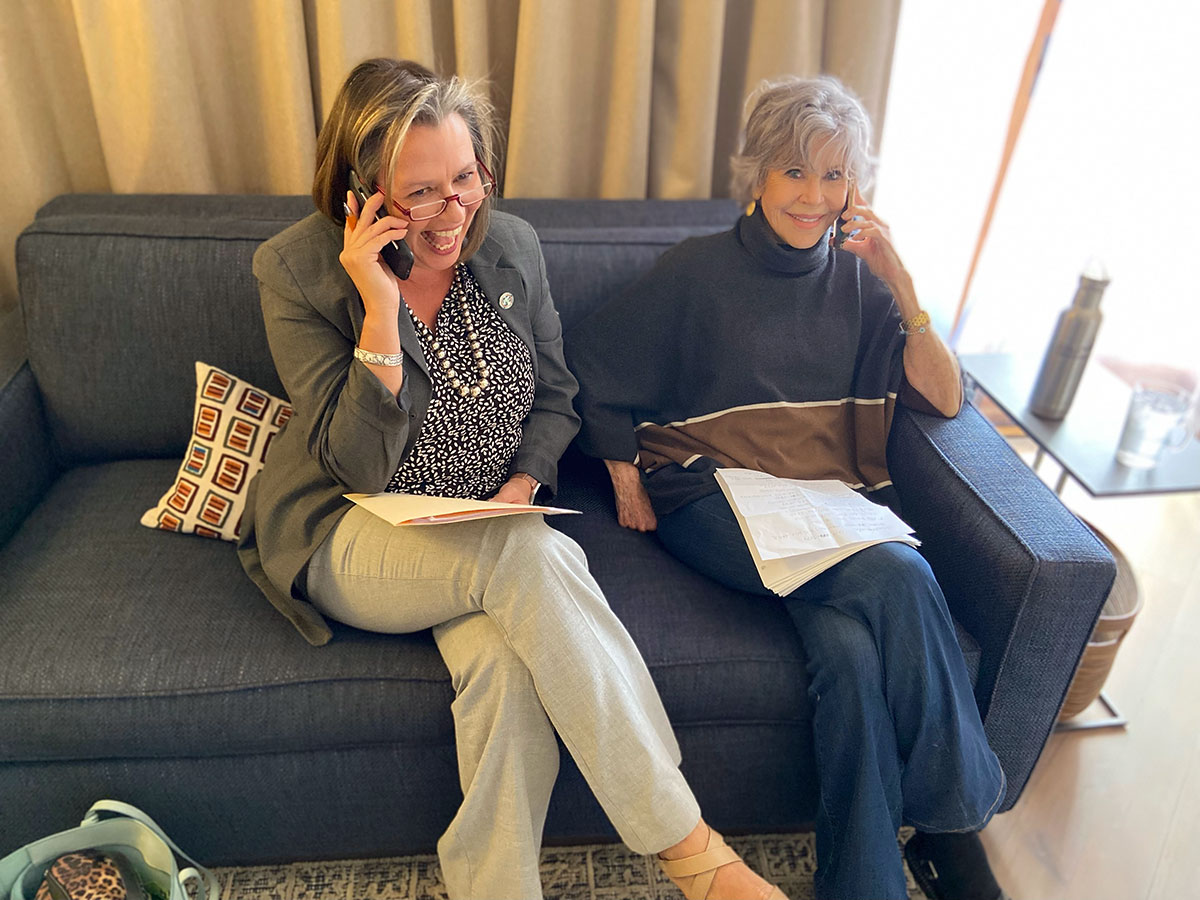 She has been able to hold fossil fuel companies accountable for cleaning up their spent wells and toxic tailings ponds. Due to her tough negotiations, she has earned record-breaking revenues for education every year in office which means free college tuition, more money for the poorestschools and health clinics. And she’s a true champion of a fair transition, feeling as I do, that fossil fuel workers are not responsible for the climate crisis and must be re-trained if necessary and paid union or union-equivalent salaries and benefits as they move to capping wells and building wind turbines for the green energy sector. To donate to Stephanie: https://secure.actblue.com/donate/blog-richard 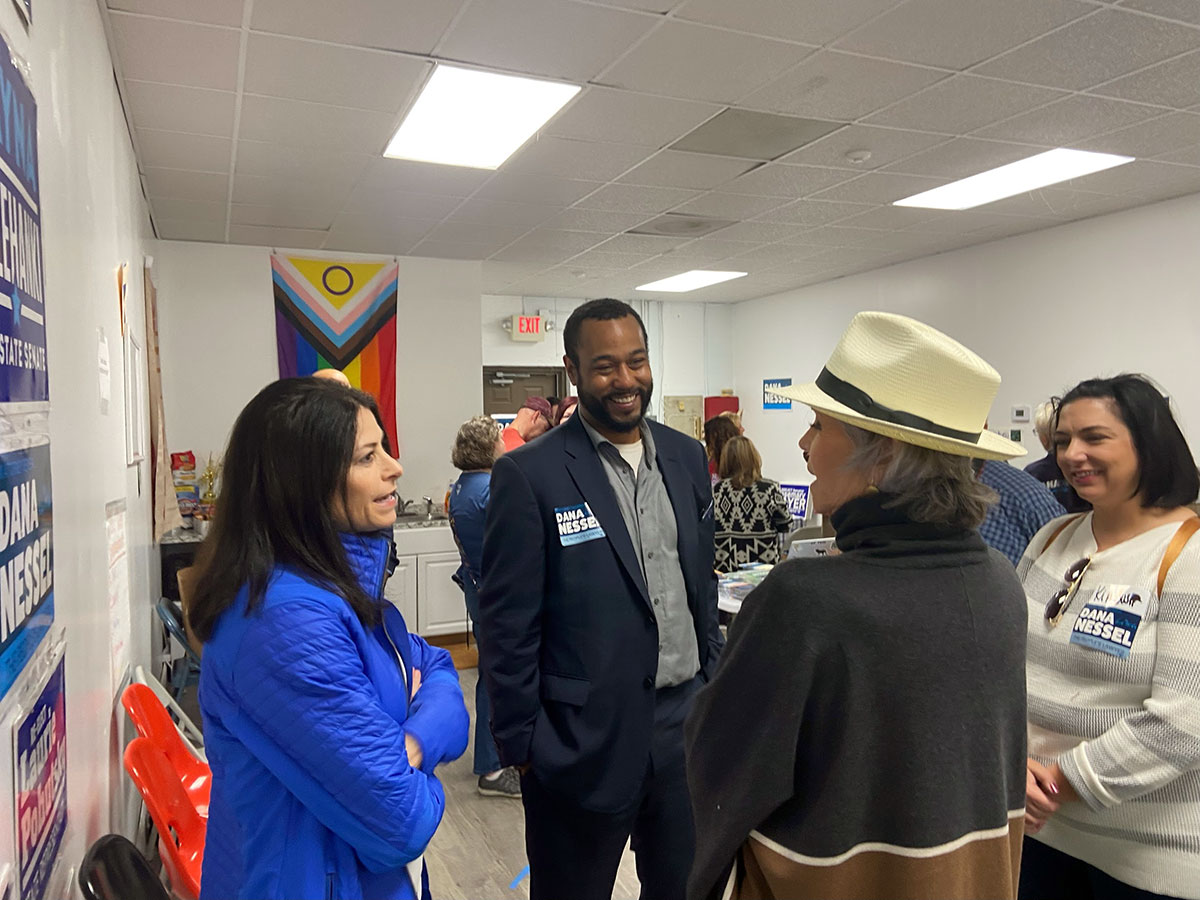 From Santa Fe I went to Detroit to campaign for Attorney General, Dana Nessel, who is running for re-election. Dana, another brave young woman, has fought hard against the Canadian oil company, Enbridge, who want to bury an aging gas pipeline in a tunnel under the Straits of Mackinac, a disaster waiting to happen.

Enbridge has a terrible record of leaks. The company was fined $1.8 million because it didn’t correctly inspect Line 5 and its other pipelines. Enbridge Line 6B spilled 1.1 million gallons of oil into the Kalamazoo River after knowing the pipeline was unsafe but not repairing it. Enbridge lied about the status of the protective coating on Line 5. Enbridge Line 5 has spilled 33 times and 1.1 million gallons along its length. 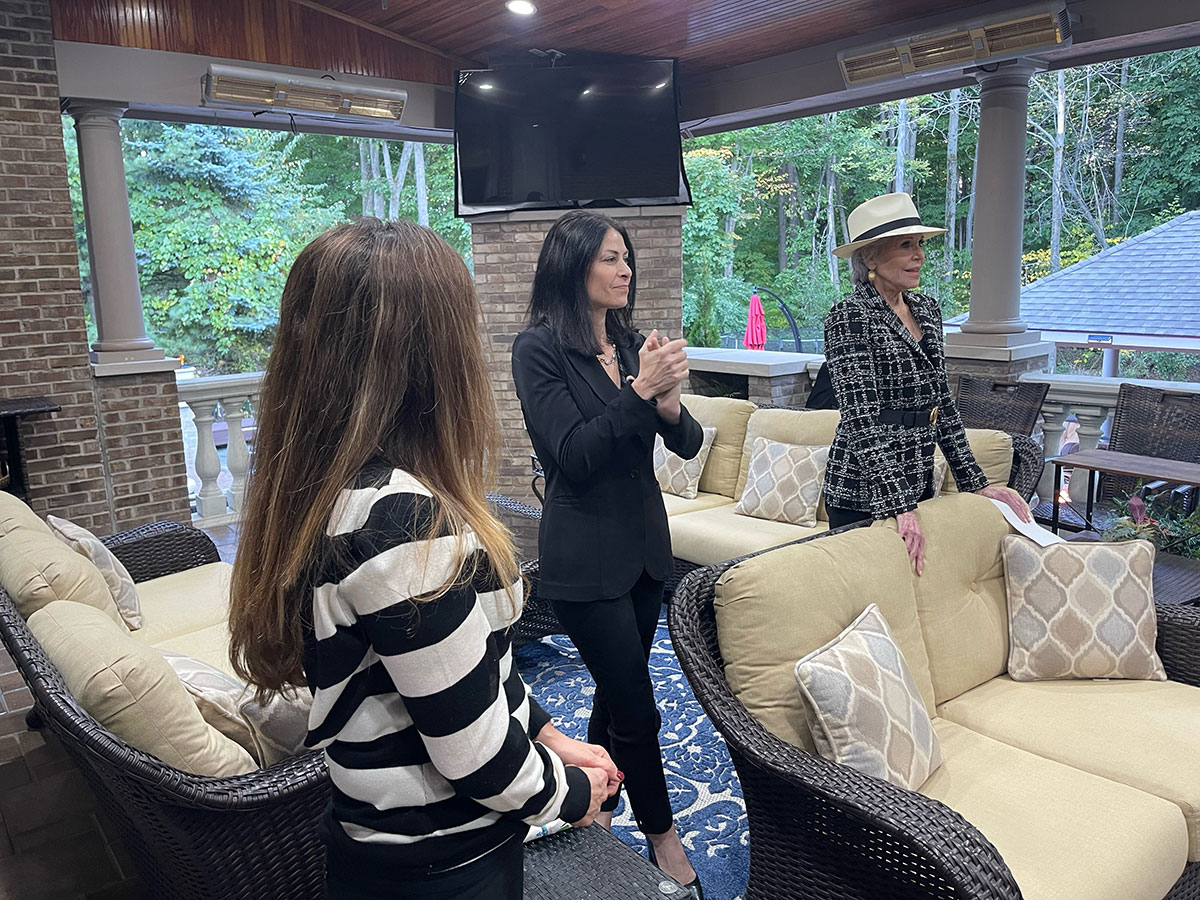 With Dana Nessel on my right

Dana is a true progressive who pledges to be the ‘People’s Attorney’ instead of the corporations’ attorney. She’s fighting to stem the tide of Michigan’s biggest environmental crisis in decades – PFAS contamination and was the first Attorneys General in the country to bring legal action against 3M, DuPont, and other manufactuteres of PFAS (‘forever chemicals’). Plus, she  won’t enforce a state law banning abortion. She’s taken a lead role in fighting against companies that try to take advantage of Michigan consumers, whether it be through unfair utility rate increases or unscrupulous business practices. Her opponent, Matthew DePerno, is conservative and a favorite of former President Donald Trump who has claimed he will prosecute Nessel if he’s elected. To contribute to Dana: https://secure.actblue.com/donate/blog-nessel

This midterm election marks a crossroads: if we elect people who are not indebted to corporate financing, who will truly work to make life safer, easier and fairer for the average person, we can change so many things across this country…including SAVING OUR DEMOCRACY. So please, do your homework, check out the candidates and where their money comes from and make a plan to VOTE.

To donate to the JF Climate PAC https://secure.actblue.com/donate/janepac-website?refcode=header