I know, I know, it’s been waaaaay to long since I wrote here. I am so grateful to my social media community for not getting too upset with me. I’m hoping I can just jump back in like one does with old friends.

I want to give you a thumbnail update on all that I’ve been doing and thinking. As I look back over the months since my last post I realize what an interesting life I am blessed with. I want to say that I never cease reminding myself of the privileges that allow me to do what I do, privileges such as being white, being financially comfortable, being famous and being healthy. I take none of this for granted. I try to use what I have to help make things a little better for those less privileged.

So, we finished Season 5 of “Grace & Frankie” and I feel it is a funny season that folks will relate to. The final episode is a humdinger!!! 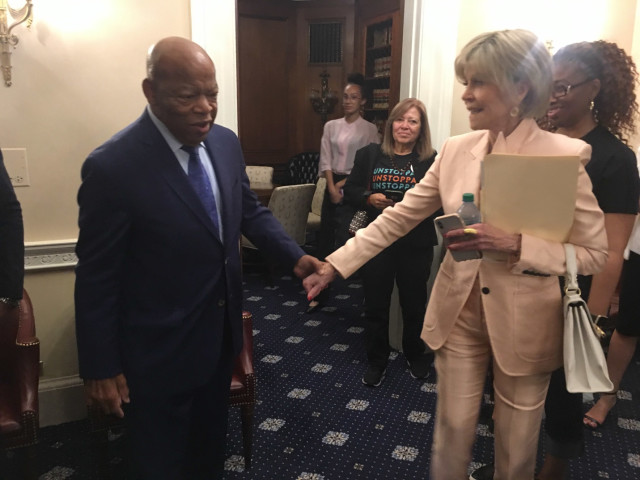 When it was over, I headed to Washington, DC, to lobby with the National Association of Women Farmworkers for overtime pay and the National Alliance of Domestic Workers for A Bill of Rights. This was on behalf of the #Times Up Movement. One special person I met with was the iconic Rep John Lewis. I first met him back in 1973 when I was in D.C. lobbying with Tom Hayden for an end to the Vietnam War. I’ve been at this a long time. 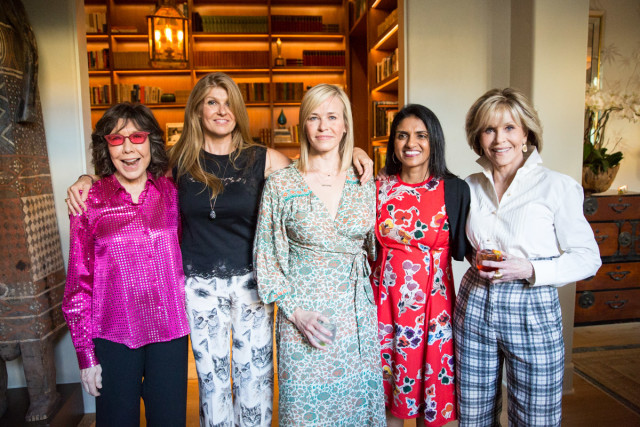 No sooner did I get back than Lily and I hit the road, traveling to Michigan again in support of the One Fair Wage ballot initiative that would raise the minimum wage for everyone including tipped workers and allow them to keep their tips. ROC, Restaurant Opportunity Centers United, is the organization behind all the One Fair Wage efforts (we’re also fighting for this in New York and D.C.) In the 7 states that have this one fair wage, sexual harassment and poverty have been cut in half. The Republican legislature in Michigan under pressure from the powerful “other NRA” (National Restaurant Association) has tried to keep us off the ballot though yesterday we learned that the official committee that determines such things ruled that we made it, now as I am writing this, I heard that they are trying to repeal the One Fair Wage measure— kick us off the ballot for some rigged reason We’re prepared for more political shenanigans from the GOP but we’re prepared to fight. We know that folks in Michigan will want to vote themselves a raise and we’ll defend that. I’m planning to go back in October to rally voters.

I know there are people who say celebrities shouldn’t get involved and they will attack our ballot measure saying that people outside Michigan are too involved. But look what we’re up against: the NRA is spending tens of millions of dollars to defeat us, as is the Republican Legislature. It never stops and there’s no reason that people who don’t live in Michigan shouldn’t help people who are suffering poverty level wages and terrible sexual harassment wherever that occurs. Too many people spend too much time worrying about whether the chicken they’re eating is free range but don’t give a thought about the people who are serving us our food! 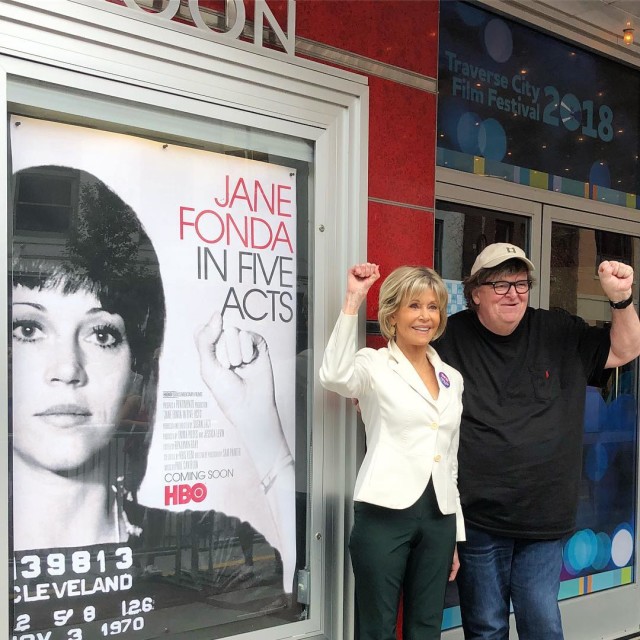 Speaking of Michigan, I attended the Traverse City Film Festival started 14 years ago by Michael Moore. My HBO documentary, “Jane Fonda In Five Acts” was screened there and won the Best Doc prize. I had so much fun spending time with Michael both at the on-stage interview he did with me and during our private dinner. He does so much for Michigan and the festival has completely revitalized Traverse City which is now a lovely, thriving town on the banks of Lake Michigan. 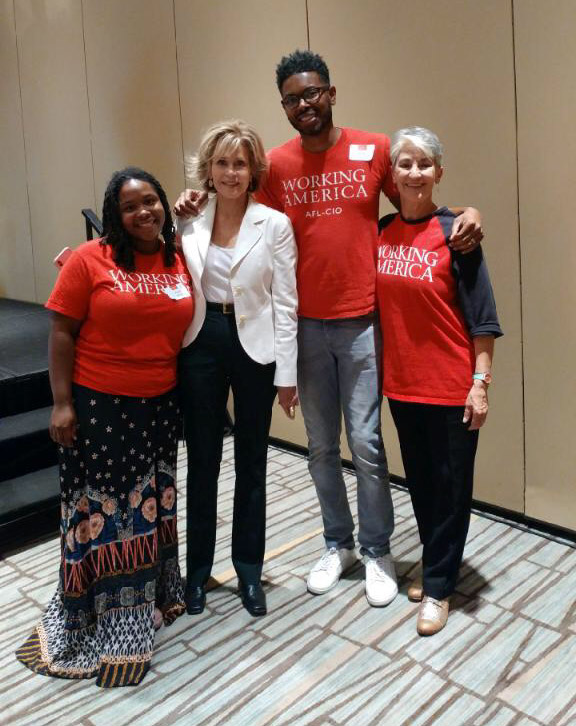 I was also in Chicago at a Leadership Conference held bi-annually for the staff of Working America, the community arm of the AFL/CIO. I had an hour-long meeting with 8 of the canvass leaders and was deeply moved and impressed by their stories. They are a diverse group—latinix, black, gay, White, Muslim, Jewish, Protestant. Mostly young. Most saw the canvassing jobs that were advertised on Craig’s List as a “just for a few months” thing. But then they had the experience of knocking on doors and changing people’s minds who started off not wanting to talk to them at all because of their race or because the person is a Trump supporter. They told me this was when they decided canvassing was a job they wanted to do forever. They knew they were making a difference and they all realize the importance of speaking directly with people who feel unseen and unheard. They listen to what people say is important to them and why. Health care, coverage of existing pre-conditions, schools, jobs, Social Security—these are top of list most often. Then the canvassers tell the person something they don’t know such as how the current administrations health care plan does away with pre-condition coverage or how his new tax plan benefits the already rich. Many people become members of Working America right then and there which means they will receive mailings relevant to their issues, and, if it’s during an election cycle, which candidate supports the things they think are important. The canvassing jobs are well paying, with benefits and year-round, not just during elections.

This kind of on-the-ground, face-to-face work is essential. We used to do that. The Democratic Party used to do this. Complacency and a new focus on tech and other constituencies changed that and, in its place, the Koch Bros financed robust grassroots organizing that has resulted in the GOP gaining majorities in state legislatures and gubernatorial seats across the country. This is why I put my time, my energy and my money with organizations that do this ground work like ROC United (Restaurant Opportunities Centers) and Working America. 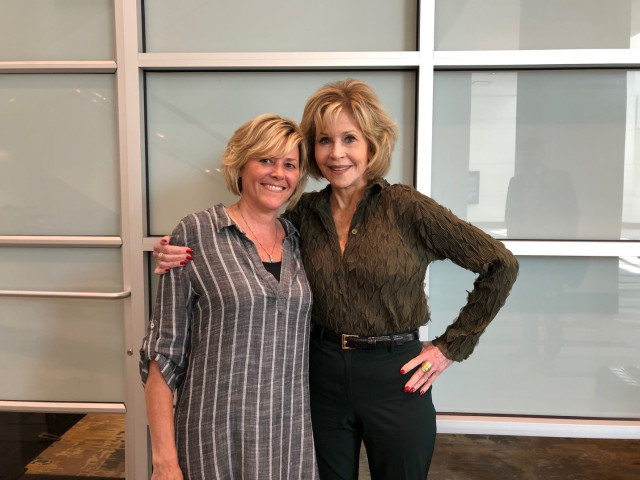 While at the Working America conference, I met with Christine Campbell, President of the American Federation of Teachers in West Virginia who recently led the amazing teachers’ strike. She’s so smart and brave.

I have also been out in communities in Los Angeles together with Black Lives Matter and White People 4 Black Lives, gathering signatures for a Reform L.A. Jails ballot initiative to stop the spending of $2.5 billion to build a mental health jail (total oxymoron, right?) and, instead, use the money to build proper mental health facilities and housing for the huge homeless in L.A. We mostly went to farmers markets on weekends to collect signatures and I can testify to how helpful it is to do this work when you have a hit TV series and a hit movie behind you!! People really wanted to see what I was doing and talk to me. We’ll be on the L.A. ballot in March.

I went up to Sacramento, the capital of California, to lobby for ending forced arbitration. People who are not in a union are made to sign this agreement as a prerequisite for getting a job, along with non-disclosure agreements. What these do is prevent the worker from having their complaints brought before a court of law and being heard in the public sphere (complaints can range from sexual assault to wage theft, being fired for pregnancy, etc). This is how serial perpetrators and bad bosses can continue undetected. This too was part of the #TimesUp Movement.

I was also lobbying with the National Association of Domestic Workers to demand overtime pay. This bill just passed the Senate. We’ll see of Gov Brown signs them into law. 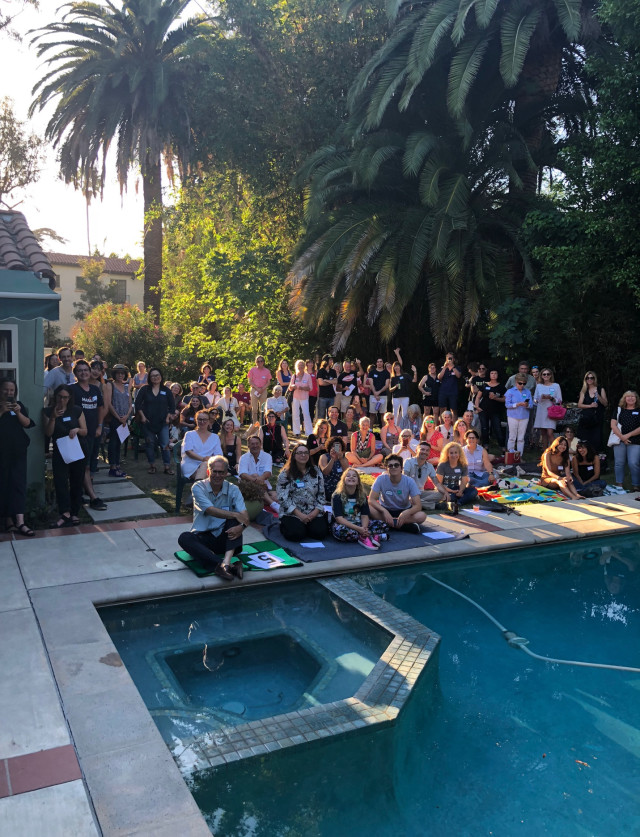 I spoke in a back yard in L. A. to people interested in canvassing. There are four congressional seats within two hours of Los Angeles where the Democratic candidates are outstanding.

I am doing all I can in the weeks and months leading up to this midterm election Nov 6th. In all my 80 years, I don’t remember an election this consequential. We must stop the policies that are benefitting the rich and hurting the working class and poor. We must stop the pillaging of our lands and natural resources and the treating of our allies as if they were our enemies and our enemies as if they were on our side. We must try to elect people who want to change the way our economy works, the way our criminal justice system deliberately targets people of color and the poor and all the ways that we are being pitted against each other. And we must not allow someone to be appointed to the Supreme Court who would oppose bringing the president to justice if and when he is found guilty of crimes.

If I wasn’t doing all this I don’t think I’d be able to sleep. There’s nothing like action and activism to salve the anxiety of being in the midst of an existential crisis. That and seeing all the amazing women who are running for office and winning and the young people who have taken it upon themselves to finally demand sensible gun legislation. It is they who will change the landscape of this country.