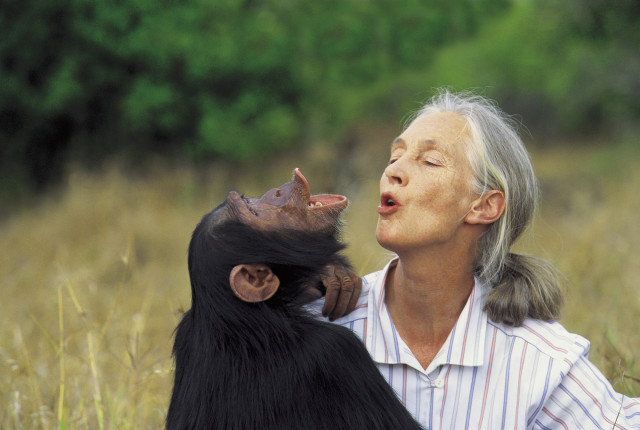 Interview Magazine asked me to interview Dr Jane Goodall for an upcoming issue. I’ve known Jane since the 1980s. I got to know her better in the decade I was married to Ted Turner who has long been a friend and supporter of her foundation. I always knew when he was on the phone with her because he’d answer the phone and start howling like a chimp.

I am in awe of the work she has done over the decades, but none more so than her program called TACARE (TakeCare), which she first told me about 2 years ago at a fundraiser in Pasadena. (She spends more than 300 days a year traveling, speaking and fundraising.) 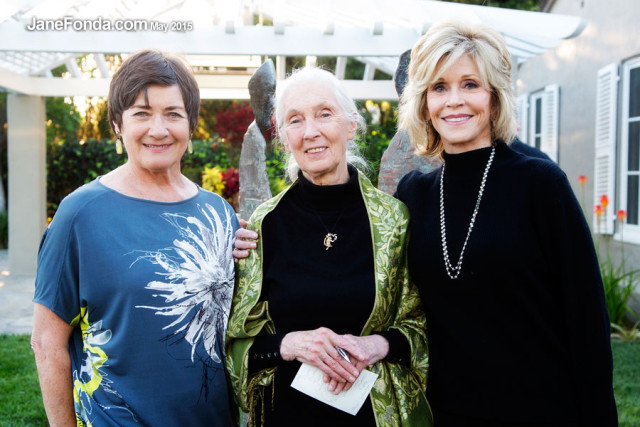 GETTING AN OVERVIEW–LITERALLY
TACARE is a community-based conservation project. The idea for it came to Jane in ’94 when she flew in a small plane over the vast Gombe Ecosystem which contains Gombe National Park where she has studied chimps since 1960. There below her was the park, like an oasis, but where once there had been a vast unbroken forest, the rest of the ecosystem had been turned into bare hills. Gone were all the trees, cut down by people desperate for land to grow food on and wood to burn or sell. The habitat that the chimps depended on was in grave danger! 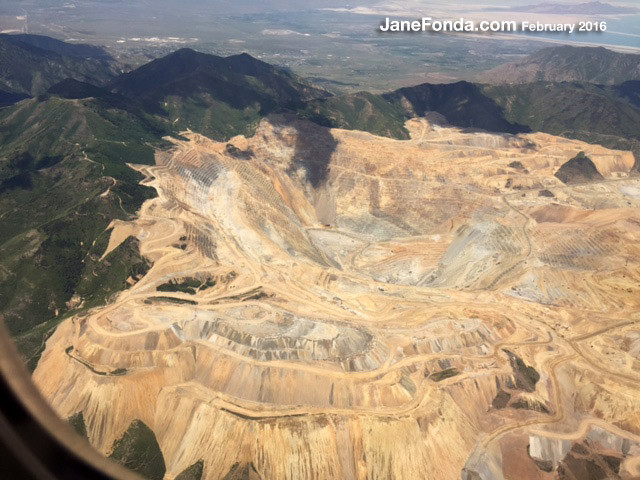 This is not a picture of what Jane Goodall saw in 1994. It’s what I saw recently saw and photographed from a plane as we were coming in to land in Salt Lake City. This is what a copper mine has done to the mountains and natural habitat. We all need to look out of plane windows more often in order to catch a glimpse of the horrific reality we can’t often see on the ground.)

Everything in the Gombe Ecosystem was out of kilter because of population growth—too many people and not enough arable land, trees, food or water to sustain them. Jane saw immediately that she couldn’t save the chimps when the people living around their park were starving. She rounded up a team of local Tanzanians experienced in forestry, agriculture, water and health issues and they met with 12 villages surrounding Gombe Park to hear directly from villagers as to what they wanted and needed to improve their lives.

This was what really caught my attention when she first told me about the project. You see, all too many of the biggest funders/philanthropists (I won’t name names much as I’d like to) send in “experts” who are foreigners, who don’t listen to the people on the ground who are most impacted, who impose what they think should be done. And the problems aren’t solved sustainably. For instance, to stop malaria, toxic-chemical-laced mosquito nets were sent to countries where malaria is a problem without knowing that village people use the nets to fish, thereby unwittingly poisoning their waters.

Jane Goodall and her team, on the other hand, partnered with the villagers to design a holistic plan to train the local people to improve their lives in an environmentally sustainable way with agro-forestry, restoring fertility to over-used farmland without using chemical fertilizers, etc. Seeds planted in the ‘90s are now 20 feet tall trees and TACARE works in 52 villages where around 350,000 people live. The Greater Gombe Ecosystem which is home to more than half of Tanzania’s 2,000 wild chimpanzees is being brought back to life. A win-win…the chimps’ habitat is being protected by the local people themselves—they’ve learned how interwoven their long term survival is– and the lives of villagers have been vastly improved. With support from USAID, the Norwegian Government and individuals around the world, TACARE has also brought healthcare, family planning, scholarships for girls education and micro-credit opportunities, particularly for women, into the villages. (When women and girls are educated and able to bring in money to the family they tend to want fewer babies and can negotiate contraceptive use from a position of strength).

This is the transformative template that Jane Goodall and her JG Institute have created. They have replicated it in Uganda, the DRC, Congo-Brazzaville and Senegal and are ready to be scaled up and transferred to millions of people in other rural areas.

This template may well also be a road to peace in many African countries: when rebel soldiers, some as young as 8 and 10 years old, have an opportunity to earn a living through eco-farming, fishing, eco-tourism and such, they are more apt to lay down their guns.

Jane Goodall is known as the “lady who works with chimps.” Yes, and she’s so much more. A woman who understand to her core that we are all interdependent.