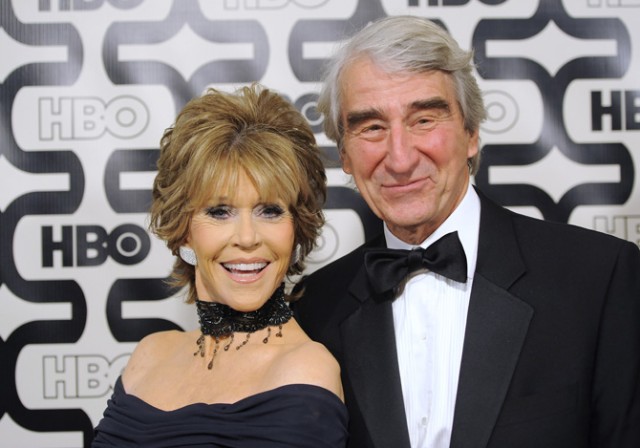 I should have taken pictures but it felt inappropriate. So I’ll just have to use my words to tell you about the parties we went to this weekend. They were really fun. At the CAA party on Friday I hugged and congratulated Anne Hathaway who recently did a magnificent job emceeing the Women’s Media Center gala in NY and wowed everyone with her intelligence. She told Robert Deniro about One Billion Rising that will take place around the world this coming Valentine’s Day, Feb 14th. She said, “Robert, one billion women in the world are rape or beaten in their life times. One billion people, women and the men who love them, will rise up to dance, sing, strike,raise their voices to say “enough.” Join us. You don’t have to do a fancy dance, just get out there somewhere and sway your hips and rise with us.” He had that funny, bemused, crooked smile of his, but seemed open to the idea. Robert Redford’s on board and has done a video explaining why he’s rising (Go to the V-DAY website). (But I’ll write a whole blog soon explaining what One Billion Rising is, cause you’ll want to be part of it.

I met Jennifer Lawrence who was so amazing in “Silver Linings Playbook.” For those of you who haven’t yet seen the film, I urge you to go, but you know Jennifer from “Hunger Games.” In “Silver Linings Playbook” her presence on the screen is electric. She is so utterly present, so inside her character’s skin that it’s a rare thing to see. She’s way taller than I had realized and really easy to talk to. Robert Deniro is in the film and also disappears into his character. We forget he’s Deniro. I told him that. I think it’s the best supporting actor role this season…and there are a lot of good ones! The director, David O. Russell, is also really easy to talk to and took me completely by surprise when he rattled off all sort of obscure trivia about my career–including, even the pretty silly “Sunday in New York.” I had no idea he knew much about me. There was a recent interview with Deniro describing David’s style of directing–he sometimes shouts things, ideas, new lines, etc at the actors while the camera is rolling and I think that would be such a great experience, would keep you fresh and surprised. My new dream is to work with him. I love all his films which, besides “Silver Linings,” include “I Heart Huckabee,” and “Three Kings.”

Demi Moore and I had a good talk. I’ve known her for over 30 years. She looked really well and said that she’s working on herself and feeling very upbeat. On the way out, I ran into my pals Rosario Dawson, looking radiantly in love (with the brilliant Danny Boyle who made “Slumdog Millionaire” and “Train Spotting” among others), Kerry Washington who was so good in “Django Unchained” not to mention “Scandal.” Rosario, Kerry, Anne Hathaway and I are all on the board of Eve Ensler’s global organization V-Day: Until The Violence Stops. Leaving, I also ran into Jennifer Anniston, Naomi Watts, Emily Blunt and Freida Pinto and her partner, Dev Patel, who co-starred in “Slumdog Millionaire”. Dev is also in “The Newsroom” and Freida is a L’Oreal brand ambassador, as am I. What truly nice people they are.

Last night we watched the Golden Globes at home. Jodie Foster’s speech when she won a Lifetime Achievement Award made me cry. The first thing she did was shout out, “I’m 50! I’m 50”, with her arms spread wide. Then she said she was going to say something she had never said before, “I’m single.” I’ve never seen anything like her speech at an awards show…raw, honest, thrilling, inspirational–all, it felt like, in one, long, exhuberant breath, a compact, radiant body of pure energy, asking us to understand her, her need for privacy having worked as an actor since she was 3; her sending an incredible message of love to her mother who, I surmise is ill; the way she acknowledged her ex-lover but still her soul sister and co-parent of their 2 sons; her saying “This feels like the end of one era and the beginning of something else. Scary and exciting and now what?” Boy, can I ever relate to that. And later in the speech she said, “I want to be seen, to be understood deeply and to be not so very lonely.” Is there anyone who can’t relate to that? Is that not what we all dream of, pray for in our lives? To be seen and understood and not lonely? Whew!

I thought Tina Fey and Amy were fantastic and I loved that there really wasn’t a sweep by any one film.

After the show we went to the HBO post-Globes party where we sat with Jeff Daniels and Sam Waterson. I love and admire them them both so much and so many friends came by to chat: Michael J. Fox and his wife and son, Sally Field who is one of my dearest friends and who I wish had won Best Actress, Jeremy Irons, P. Diddy and many others.

From there we went to the Sunset Towers for the CAA party. Bill Clinton was there which was exciting. He said he and Chelsea are watching over Hillary and that she’s back at work. Again, so many friends–Eva Longoria, Kate Hudson, Kerry Washington again, Bill Maher. Jennifer Lopez came over to say hello and talk for a bit. She’d changed into a black, backless chiffon number that was stunning. Leonardo Di Caprio, Keith Urban and Nicole Kidman, Bill Murray. I find Bill fascinating. Its hard to know when he’s serious and when he’s joking but he said he wanted to work with me and then, later, gave me some profound acting lessons. Quentin Tarantino sat with me for quite awhile carrying his Golden Globe for original screen play. I told him how extraordinary I think it is that “Lincoln” and his remarkable “Django Unchained” were in theatres at the same time. One, “Django,” viscerally shows what slavery was like, all within the framework of a sort of spaghetti western with lots of humor thrown in. The other, “Lincoln”, shows how that president got government to work to end slavery.

There’s a scene in “Django” where Kerry Washington is lashed with a whip. I told Quentin that it was the first such scene that I actually believed. I could feel every lash. Kerry seemed to be receiving each lash on behalf of her ancestors, all those who had experienced that, all the ghosts of the slaves on the actual plantation where they filmed. Kerry really got to me and I cried. I asked if it was a hard scene to shoot and he said that the one where Jamie Foxx has to get down on his knees before a white man and beg him not to whip his wife was perhaps even harder. “I filmed that myself with a hand held camera,” he said. “I was crying and my tears filled the camera lens and it fogged over and I couldn’t even see exactly what I was filming. I just pointed the camera in what I thought was the right direction.” “Did you actually use that footage you shot yourself?” I asked. “Yes,” he answered, “That’s the footage in the film.” It’s an important film, as is “Lincoln.” I have read about and heard people say after coming out of “Django,” that they’d never realized before what slavery was really like.

Quentin then went off somewhere forgetting to bring his trophy with him so I grabbed it for safe keeping. About 30 minutes later, he came back, all upset because he couldn’t find it and it was awhile before I saw him and let him know I had it.

As we left the party, people had started to dance and I was mesmerized watching Jennifer Lopez dancing, sometimes with her beau, sometimes alone, confident, glowing, sexy as all get out. As she moved, her back, bare to the waist, was a study to behold .

Now the parties are over and it’s back to work. I am feeling very much as if a new era is starting for me, just as Jodie Foster described it, and I’m trying to be as present and healthy for it as I can. I started the year with a cleanse and have made my meditation practice more regular and longer–but I’ll write about all that in my next blog.