The parties are back-to-back and the nominees pretty much go to them all. Richard and I go to the ones that feature the films, actors and directors we especially admire.

Yesterday, just about every major film star and major director, well, 125 of us, who has worked for Paramount Pictures, gathered on a sound stage to have our group photo taken for the studios 100th anniversary. Let me tell you, it was very thrilling. I was in the 90th anniversary photo and many of the same people were assembled. Some, obviously, have passed. I think especially of Jane Russell who was there with us 10 years ago.

I wish I could have taken pictures of everyone there but it wasn’t possible. Here are the ones I did get: 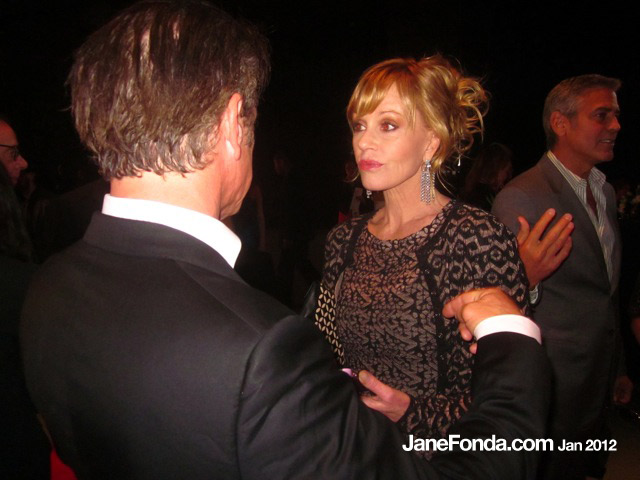 Melanie Griffith with George Clooney behind her. 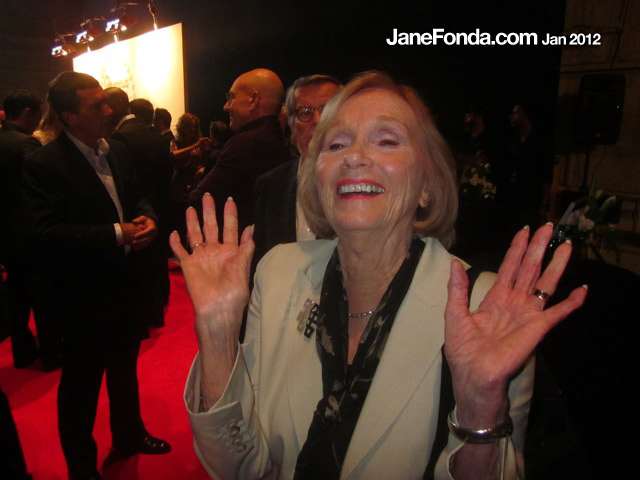 Eva Marie Saint. She has known my family for many decades. She was at my father’s home where we all gathered the day he died. They were extremely close. She is the nicest, kindest, most lively woman...still. I loved seeing her again 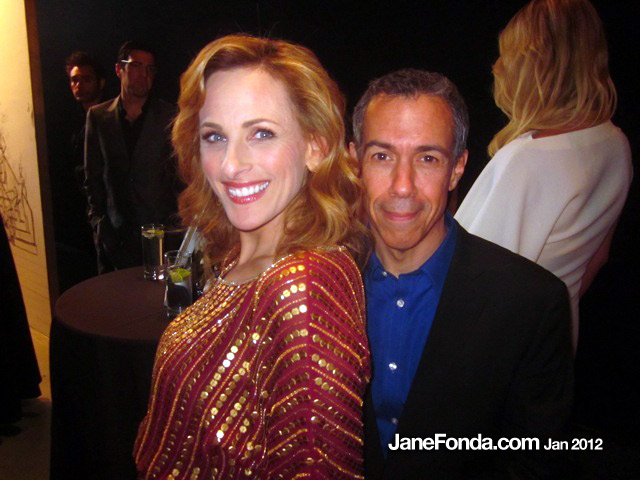 Marlee Matlin and her long-time associate, who signs for her. They’ve worked together for as long as I’ve known her—which is a long time. 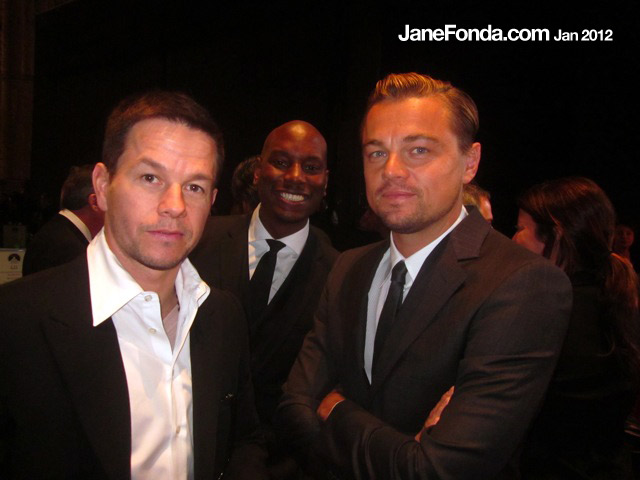 Mark Wahlberg and Leonardo DiCaprio. Tyrese is behind them. They’re clearly not happy that I asked them to pose for me. Tough! 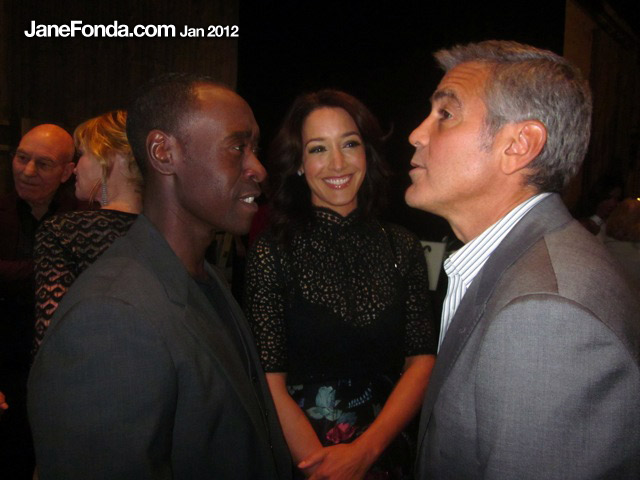 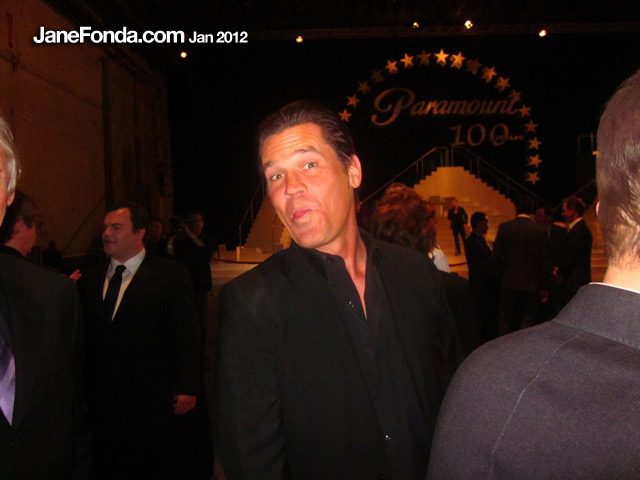 Josh Brolin, making a face. We seem to run into each other at these events and I always find him warm and loveable.

Paula Patton, was placed close to me so I had the chance to get to know her a little. She’s gorgeous, wonderful in Mission Impossible (not usually my favorite genre but it was a perfect action movie and my heart was in my throat when Tom Cruise ran down the building in Dubai—I saw it being built). Paula was so warm and sweet to everyone. I was impressed. Darn! I don’t have a picture! 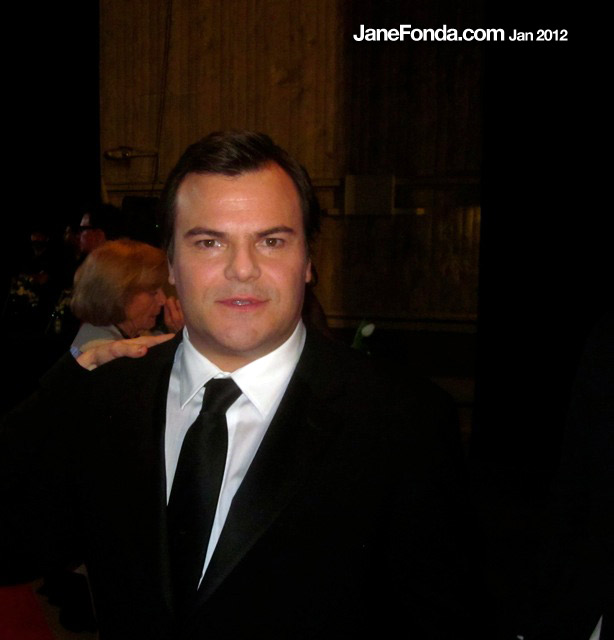 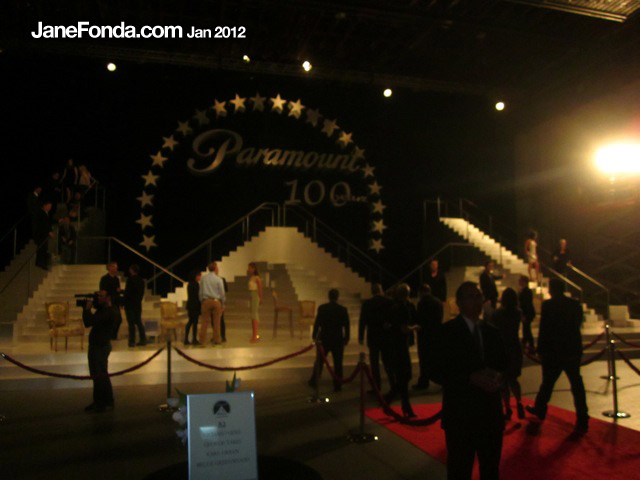 The stage with the white platforms we will soon inhabit, with Paramount's logo behind. Everyone was assigned a place and some of us were told how to pose. Justin Bieber was at the very back and top of the stairs sitting. Demi Moore (looked terrific!) was lying down on the stairs right behind me. 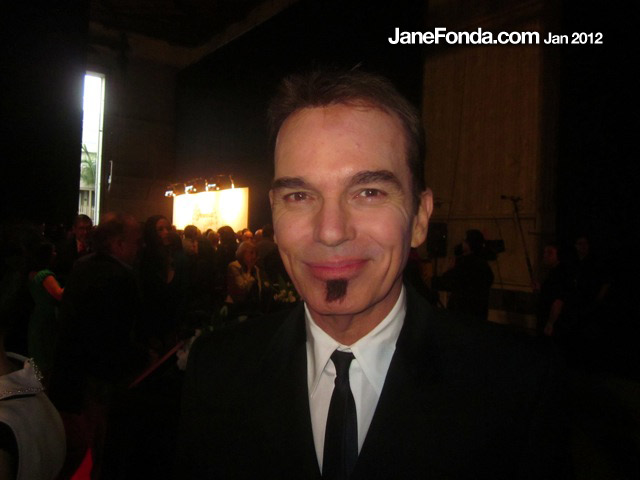 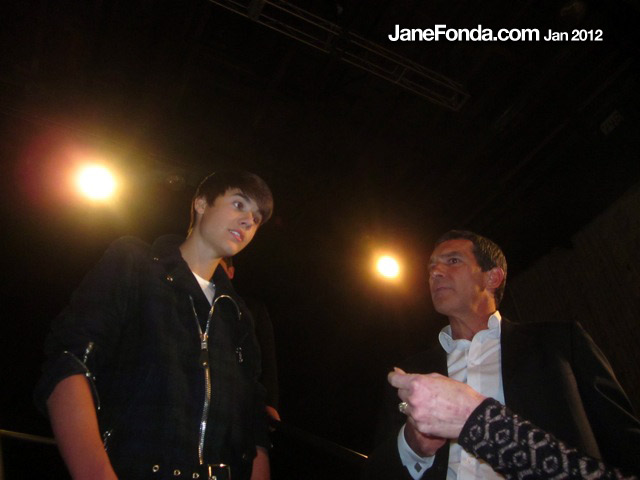 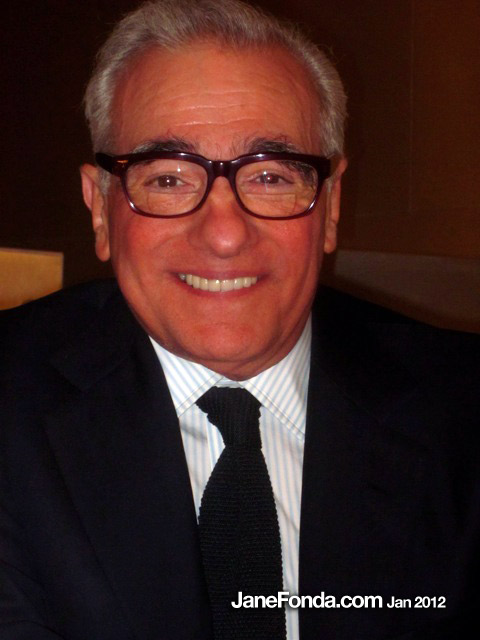 Martin Scorsese. His film, “Hugo”, is one of my favorites...and I haven’t even seen it in 3-D yet. Even so, I was transported into a fantasy that was picture perfect in every way.

By the way, my primary Paramount film was “Barefoot In The Park.” 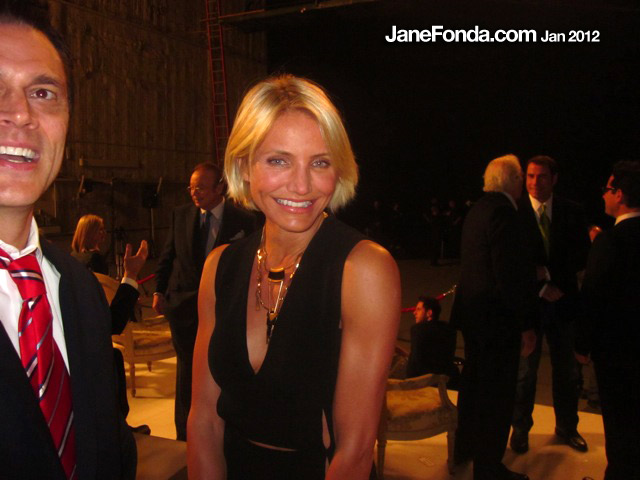 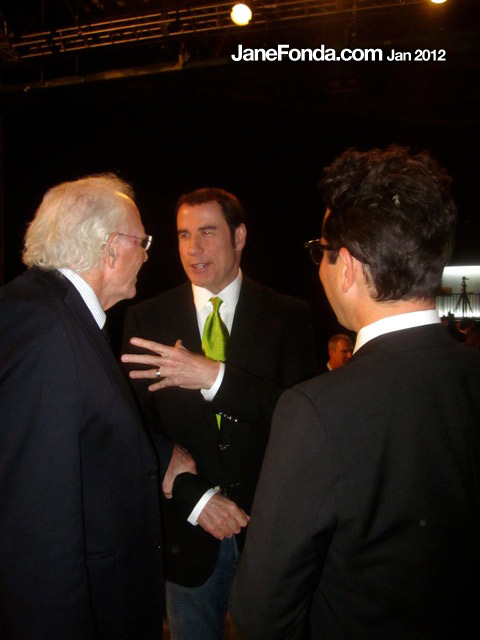 John Travolta talking to (I think) my old pal, Bruce Dern and J.J. Abrams. I first met John right after he’d made Saturday Night Fever, introduced by our mutual friend, the writer/director (Urban Cowboy & The China Syndrome), James Bridges. Bruce made “ They Shoot Horses, Don’t They?” with me. 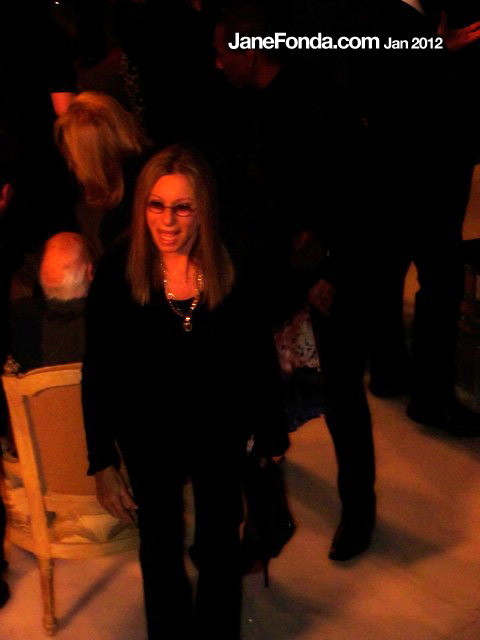 Barbra Streisand. Sorry my flash didn’t work on this. 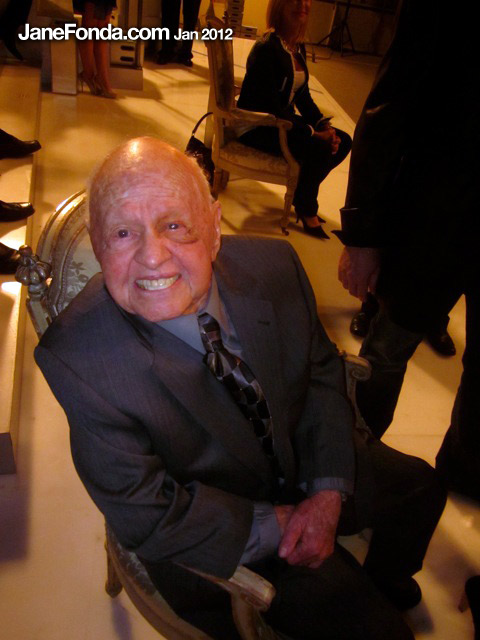 Mickey Rooney. He was at the last Paramount shoot 10 years ago and he’s still effervescent and endearing.

We also attended a luncheon honoring Marty Scorsese and his film “Hugo.” 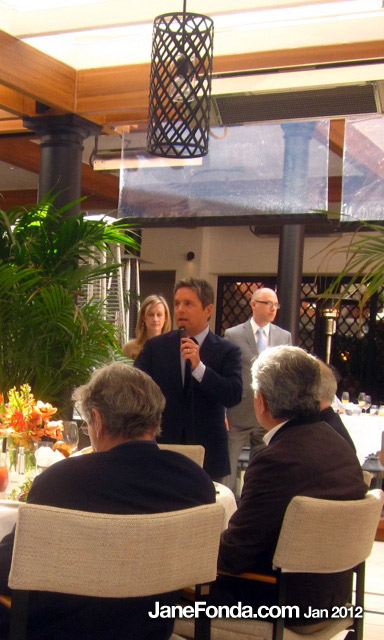 Brad Grey, President of Paramount Pictures, is standing, talking abut Marty. He was co-host of the luncheon with Robert DeNiro. 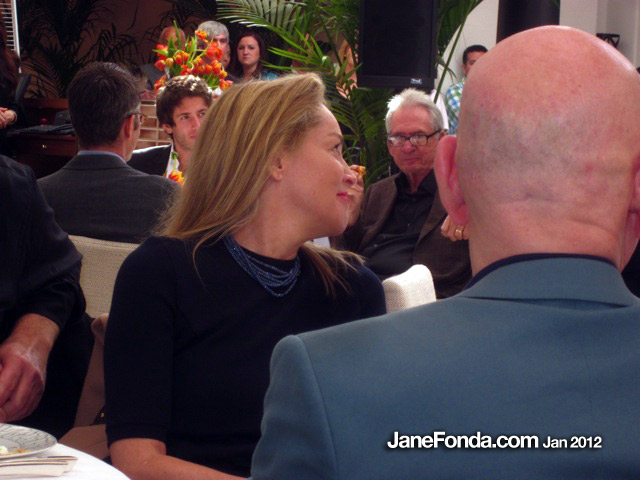 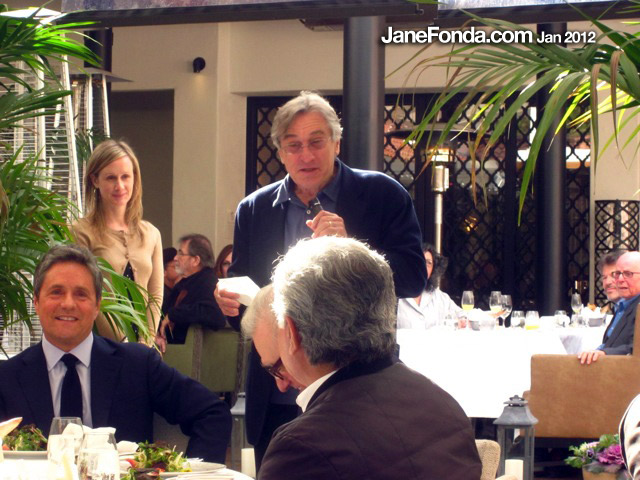 DeNiro's turn to talk about Marty. He was very funny 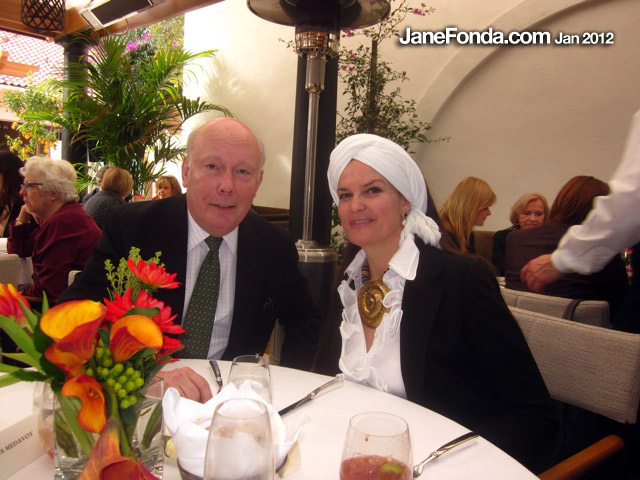 Richard and I were at a table with Mike Medavoy (who was my agent ions ago before he became a successful producer) and his wife, Irena, and, shown here, Julian Fellowes and his wife. Julian is the creator and main writer of “Downtown Abbey,” the amazing TV series which is nominated for a Golden Globe tomorrow night. 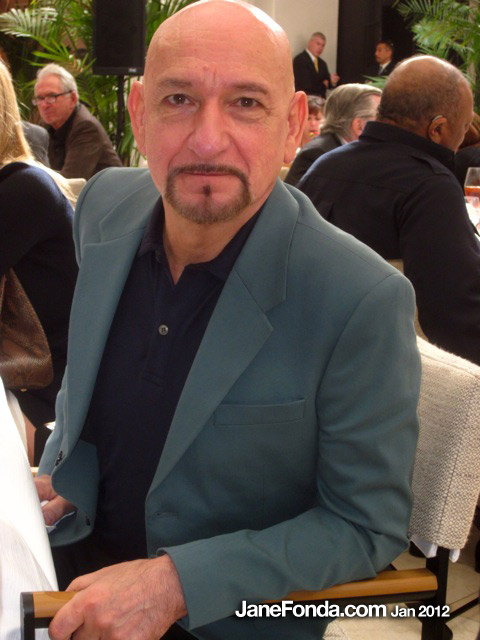 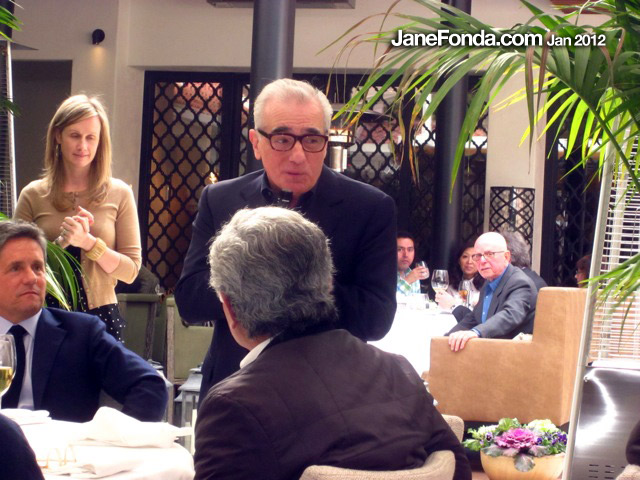 Here are this year’s films I think are “must-see:” “The Descendents“, “Money Ball“, “Hugo“, “The Artist“, “Midnight in Paris“, “The Help” and “Bridesmaids“. There is also the Iranian film, “A Separation“, which I found important and profound. Angelina Jolie’s movie, “Land of Blood and Honey“, is also a really well done, moving film about the war in former Yugoslavia. Performances that are amazing though not in these pictures include, in my opinion, Meryl’s, Glenn Close’s, and Michelle Williams.

Later this evening I will present the Golden Globe to the Best Picture in the Musical/Comedy category. Stay tuned!