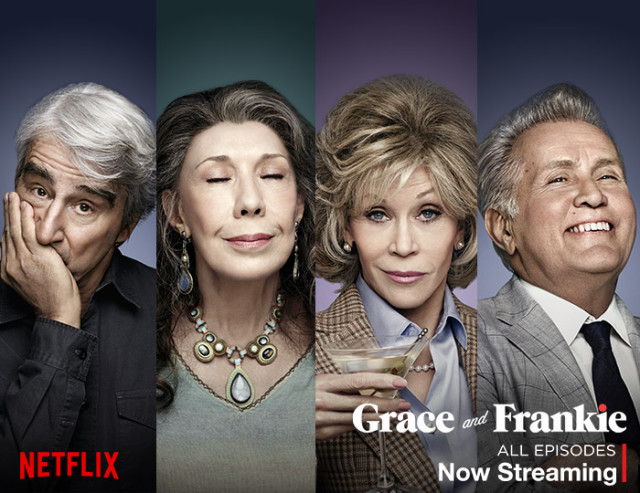 Ah the Netflix of it all! I got on a plane Friday morning to fly from New York to Los Angeles. Grace & Frankie had streamed that midnight. By the time I landed in L.A. and opened my cell phone, I had received texts and emails from friends and acquaintances saying things like “I’m on episode 6 and can’t stop,” or “I’ve seen the whole season. When can I see the next one. Can’t wait.” I kid you not. Some friends are texting me their reactions after each episode.

This is a whole new world for me. Old hat already, I’m sure, for Robin Wright, Kevin Spacey and Taylor Schilling but I’m reeling. It’s an amazing feeling that people you know can actually talk to you about an entire season and only few days have passed.

The response has been overwhelmingly positive from fans on Twitter, Facebook and JaneFonda.com I can’t answer them all but please know I do read them and it means a lot. But please don’t tell me you love it if you don’t. And, for those who’ve seen the whole season (13 episodes), how about giving me ideas of what you’d like to see happen in season two. We haven’t heard yet if we will be re-upped but you’ll be the first to know after us–Lily, me, Martin, and Sam. (Martin may take a little longer. He doesn’t use a computer or email. I used my first stamp in ages the other day cause I had to send him a letter.) Also, If you have a moment let me know what your favorite episode of G & F was.

So many of you have mentioned that you love seeing Lily and me together, I guess in hindsight we should have made a “9 to 5” a franchise like the “Hangover” or “Horrible Bosses.” Of course, they didn’t do that so much in those days. Speaking of “9 to 5”, I am so sad that the amazing actor, Elizabeth Wilson, has passed. There was a beautiful obituary in today’s papers. Elizabeth played the memorable Roz, the boss’s right hand snitch, in that film, the tall woman who would look under the bathroom stall doors to see if she could catch us at anything.

Today I’ve gotten calls, emails and “letters” on my website from folks saying they watched the show with their mothers on Mothers Day. I found that really touching.

Before I sign off, let me just say that if someone had told me during those years from 50 to 65 years when I had retired from my profession that at age 77 I’d be back on a streaming series and would have my first on-screen kiss after 15 years, I would have told them they were nuts. Here’s the thing, see: You just never know what’s going to happen in life. So don’t give up and hang onto the chapstick.