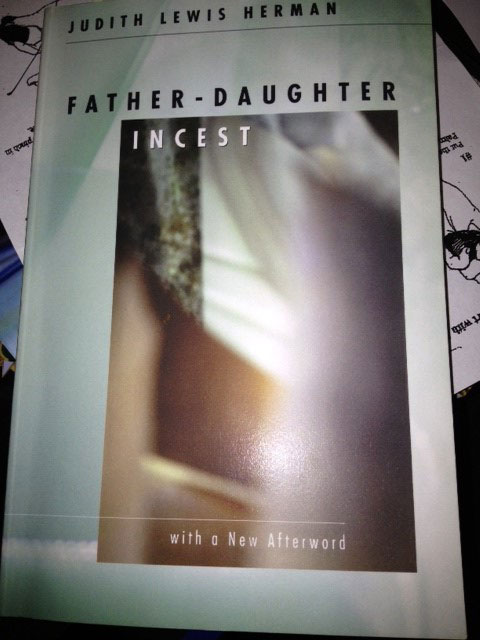 I have been very moved by many of the things people have written as a result of my last blog, FOR MY MOTHER, so much so that I want to say a few more things about this horrific (and under-reported) issue of sexual violence, incest and some of the resulting damage that is caused to the victims.

One woman shared her story with me–an agonizing story of continued, terrible abuse over much of her young life by many different men including her father. She pondered if, perhaps, she didn’t “ask for it;” if, somehow, she wasn’t guilty of bringing on her abuse. She could find no other reason to explain why she was targeted multiple times by different men over the years for sexual violation. Maybe it is more appropriate to say “. . . for terrorism,” because sex never has anything to do with it. The act may be sexual, the motivation of the predator is power and control, not sex.

I was in the middle of reading Dr Judith Herman’s book, “Father-Daughter Incest” when I came upon the answer to the woman’s question which I want to share. It is an answer that resonates with me because many of my friends who have been raped and incested have experienced the same phenomenon and it was true of my mother, as well.

Quoting Dr. Judith Herman in “Father-Daughter Incest” “It is also clear . . . that survivors are at high risk for a wide range of problems. Most ominously, exploitation in childhood seems to render survivors highly vulnerable to repeated exploitation in adult life . . . In Russell’s study [“The Secret Trauma” done by Sociologist Diana Russell], for example, incest survivors suffered rape, domestic violence, sexual harassment, and recruitment for prostitution and pornography twice as frequently as women who had not been abused in childhood. These horrible statistics led Russell to speculate that ‘the incest experience itself could have stripped away some of the victims’ potential ability to protect themselves . . . men appear to be selecting previously victimized females for further… Victimization.'” In other words, repeated victimization is NEVER the fault of the victim. It is what the original perpetrator did to her (or him) that imposes on the victim a sexual energy that a young person is unable to hold, is not equipped to handle. The sick perpetrator can sense this.

The Russell study that Dr Herman cites, along with other studies, show that incest seems to be as common in middle-class and wealthy families as it does in poor families and is pretty much the same across ethnic groups.

Yesterday I met a young woman who almost died 6 months ago due to complications in child birth. As a result, she has suffered terrible physical damage. She was not able to see her baby for two months because she was in intensive care and only recently has been able to hold her baby. She told me that when she read my blog, she recognized she’d had some of the same PTSD symptoms I described of victims of sexual abuse—guilt, self-hatred, shame. I told her I wanted to write of this in a blog because it is important that we know that such reactions to trauma–all kinds of trauma– are not uncommon, not bad, but, in fact, normal and need to be seen as such and addressed through appropriate therapy. After reading the blog, this same woman was also able to remember that she had been raped. She had, like so many victims, “chosen” to forget that it ever happened. But, of course, our bodies and our unconscious cannot forget. The trauma remains unless it is brought out into the open and addressed. She was grateful for the insights she gained from the blog.

I am grateful for the many people who have bravely shared their stories. May this dialogue continue. My deepest love and compassion to all who have suffered trauma of this nature.