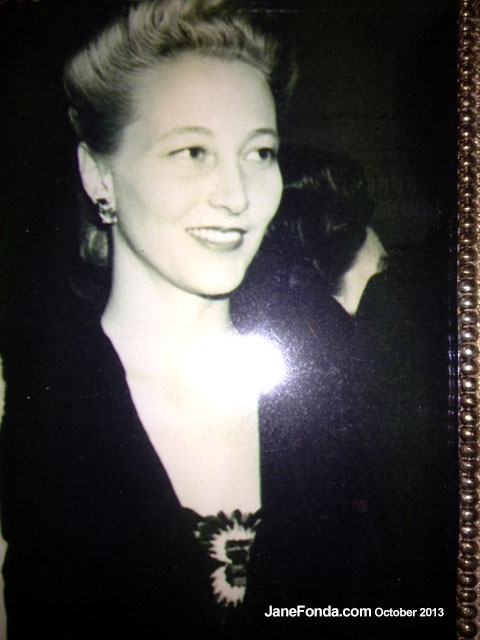 My mother was sexually abused as a young girl, long before people knew the life-long damage it causes or that there are ways to heal the wounds–the worst of which are not what happens physically but what is done to the identity, the emotions, the brain of the victim, particularly if the person is not believed, not understood, not heard.

I did not know this about my mother until I was in my sixties although I had sensed all my life that something bad must have happened to her when she was little because she was always sick, unable to really love, self-mutilated in the form of excessive plastic surgery, felt evil and worthless, hated her body, was promiscuous and eventually committed suicide when she was forty-two.

While writing my memoirs, “My Life So Far,” I was able to obtain my mother’s medical records from the institution where she killed herself. Among the documents was a typewritten, single-spaced autobiography she must have been asked to write upon admission.

Prior to this, in the mid-90s, I had been drawn to study the effects of sexual violence on girls and boys because I had started a nonprofit in Georgia (where I lived at the time) that addressed issues of sexuality among disadvantaged teenagers and discovered that many, if not most, of the girls we worked with had been sexually violated. I sometimes feel that I was called to do this work because, unconsciously, I knew that the shadow of sexual violation had cast a shadow over my own family. As a result (and unlike other members of my family), I was prepared to understand what I was reading in my mother’s report. Piecing together what she wrote and what her doctors reported, I unearthed what lay at the root of her 4-decade-long suffering. I could put the puzzle together and belatedly mourn my mother, forgive her and myself (because children–victims and their children– always think it must have been their fault, that they just weren’t good enough, must have somehow asked for it).

Twenty years later she could have found the help she needed in the specific form of therapy that arose out of The Women’s Liberation Movement in the 1970s. It was thanks to this movement, that sexual violence was finally seen as being not about sex but about power and control. This relational/cognitive therapy approaches the traumatized person with empathy and great care, creates trust and ensures safety, then takes them back through the experience, reconstructing the trauma in detail including the emotions and sensations, then mourning the loss of the old self that the trauma destroyed and finally helps her (or him) to integrate the experiences into a new, fully developed life narrative. This sounds more linear than it is, but in the last forty-some years, this approach to trauma, both sexual trauma and combat trauma, has been proven successful at allowing the traumatized person to move from victim to functioning survivor. I sometimes cry when I think of how my mother could have been saved.

Listen to this: It is generally agreed that only 16% of rapes are reported. In 1992 The National Victim Center and Crime Victims Research and Treatment Center issued a study that estimated the “true number of rapes in the United States each year is likely to be in the range of 639,500. At that rate over a twenty-year period, there would be more than 12 million American women rape survivors.” Let that sink in for a moment. Try to go beyond the stats and think that each number represents a girl or boy whose entire life and identity was ripped apart. shredded.

It was thanks to the efforts of veterans of the Vietnam War and their refusal to be silent, that a diagnosis of the effects of combat trauma was finally established–post traumatic stress disorder (PTSD). Prior to this, soldiers who were traumatized were shamed, dismissed and deemed “moral invalids.” Dr Judith Herman, in her brilliant, breakthrough book, “Trauma and Recovery,” writes that it became “clear that the psychological syndrome seen in survivors of rape, domestic battery, and incest was essentially the same as the syndrome seen in survivors of war.” And not until the “women’s liberation movement of the 1970s was it recognized that the most common post-traumatic disorders are those not of men in war but of women in civilian life.”

I am writing this blog now because yesterday I met Gail Abarbanel, the founder of The Rape Treatment Center in Santa Monica and the Stuart House next door which treats child victims. This deeply empathic woman took me through the buildings, explaining the process from initial intake to the final therapeutic sessions. Please visit their website. They are templates of how sexual trauma victims should be treated–start to finish. I wish I could wave a wand and replicate these centers everywhere across the country. As I left, Gail gave me a book, “After Silence: Rape & My Journey Back,” by Nancy Venable Raine. I read it last night. I urge everyone who has been a victim of sexual trauma to read this book as well as anyone who knows someone who has been a victim. One key thing to understand is that you must always believe someone when they say they’ve been sexually abused. Always believe children who tell. It is so very difficult to tell. The victim feels they are to blame, especially children who are developmentally unable to blame the adult abuser. And NEVER say to a victim, “It’s time to put this behind you. Just get on with it.” Ms Raine makes poignantly clear that this misunderstanding of the nature of trauma can be as painful as the trauma itself. It can never be “put behind you.” It can be confronted and managed and one can, with the right treatment ‘get on with it.’ But it is a long, brave process.

I’m also writing this blog now because I have become friends with a remarkable woman, Dr. Ann Beeder, Professor at Weill Cornell Medical College and psychiatrist at NewYork-Presbyterian Hospital/Weill Cornell Medical Center. Ann’s primary work is with veterans suffering from PTSD and, like the centers I visited in Santa Monica, she and her colleagues have developed cutting edge, beautifully empathic treatments which I am learning about.

I want to tell anyone reading this blog who is a victim of trauma, including veterans of combat, that to seek treatment is the brave thing to do. As Dr Judith Herman says, accepting help is an act of profound courage. It shows strength not weakness, initiative, not passivity. “Remembering and telling the truth about terrible events are prerequisites both for the restoration of the social order and for the healing of individual victims.”

I wish my mother could have told and been believed.