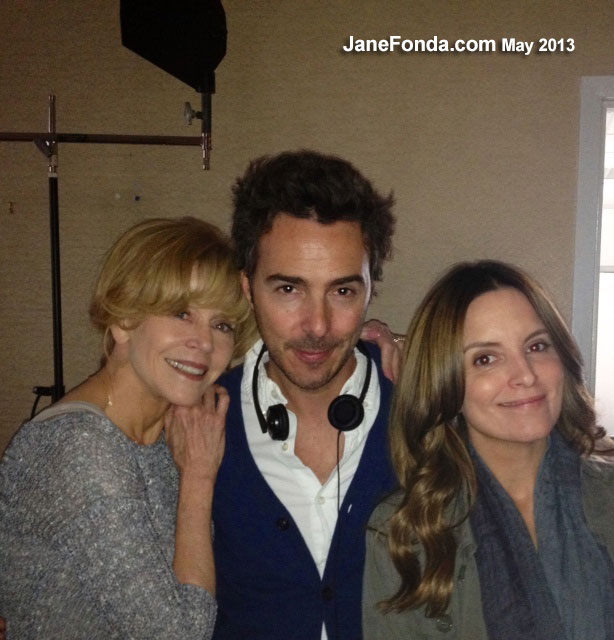 That's our director, Shawn Levy, in the middle with me and Tina Fey

The film is “This Is Where I Leave You,” based on a novel by the same name.

It’s very funny. My children, Tina Fey, Jason Bateman, Corey Stoll and Adam Driver, are amazing beyond belief. It is so exciting to be working with this cast of young, cutting edge actors who are so adept at ad-libbing. I have improvised a lot in many films but not in comedies.

This morning, people gathered round the monitor watching a scene and were crying from laughing so hard.

I feel like a Martian. Their rhythm, what they laugh at, even their language all seem foreign to me which is intriguing and just how it should be for the film. The mother (me), a tad narcissistic, has sort of lost touch with her kids emotionally — though she’s full of love, she doesn’t understand them, nor they her.

To make this experience even better, everyone of them is really nice. This is so important, especially for me at this stage of my life. I mean, you want the results to be perfect, but you realize that the process of getting there is equally important. If you’re surrounded by ego and negativity it’s not worth it. Know what I mean?

Our director, Shawn Levy, is just like my children–young, good energy, generous and smart. I totally trust him. And by the way, my BFF, Paula Weinstein, is producing this film for Warner Bros.

But tomorrow, after filming a scene in a hospital with Tina Fey, I leave for the Cannes Film Festival where I will spend 3 days for L’Oreal with some of my friends and fellow L’Oreal brand ambassadors–Eva Longoria, Freida Pinto, Aimee Mullins and maybe Kerry Washington. It’ll be hard work but also fun and then I’ll come back and resume the film.