There are several things different about the Cannes Festival this year. For one thing, the weather has been horrible. I’m told it’s the worst weather of any festival in memory–rain, big wind, cold. As a result, the Mediterranean, shimmery glow that gives the festival its party vibe was missing.

For another, it’s the first time I’ve traveled to such a scene with my publicist, Pearl Servat, I usually travel alone. This trip with her has shown me the value of having someone who has your back.

Another thing that made Cannes different was personal. This year, I left a movie that was just getting under way to come to Cannes for L’Oreal. The result has been that I left a chunk of my psyche back in New York with my “children”, Tina Fey, Jason Bateman, Cory Stoll and Adam Driver. Not to mention our director, Shawn Levy. Last night I saw the new Coen Brother’s film, “Inside Llewyn Davis” which I liked a lot, and there was Adam Driver . . . brief but memorable. I’m telling you–in case you haven’t already discovered him on “Girls”– this actor is the real deal, just as Jennifer Lawrence is the real deal. Totally original and charismatic. keep your eye out. Seeing him in this Coen Bros movie made me miss my screen family even more.

Despite the weather and my missing psyche, I had a very good time. I’m getting more comfortable with my role as a brand ambassador for L’Oreal–imagine a skin care company hiring someone my age!!! It felt less stressful than last year and I had opportunities to spend time with some of my friends who also work with L’Oreal. 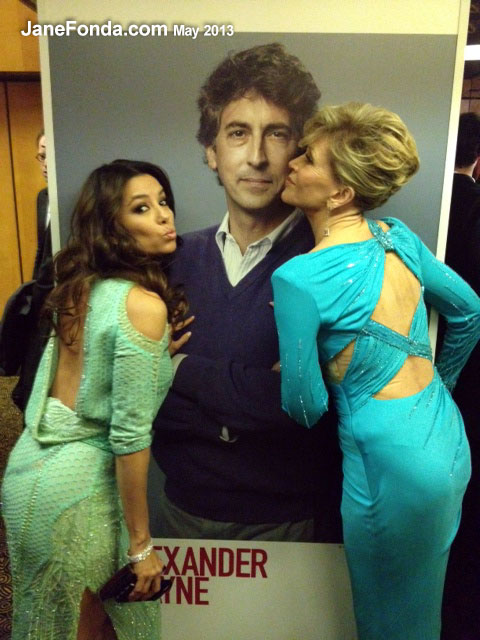 Here’s Aimee Mullins adoring me in my gown from 3 years ago. 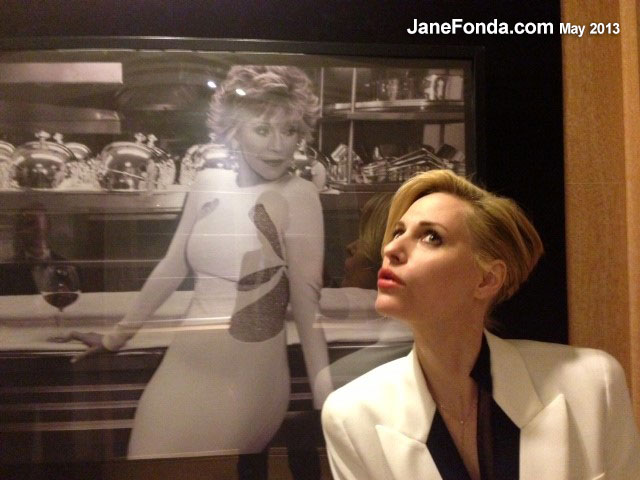 On the first day, there was a very interesting shoot with the fantastic, adorable, brilliant photographer Norman Jean Roy.

I wore this black blouse and skirt from Armani Privee and here I am, looking much glummer than I felt, with the stylist and friend, Michael Angel. 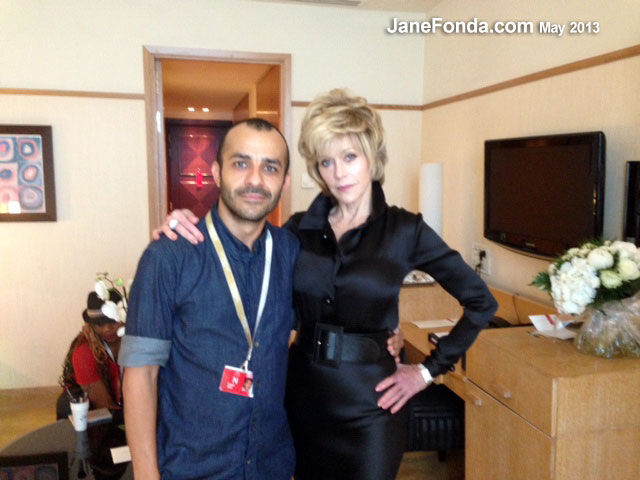 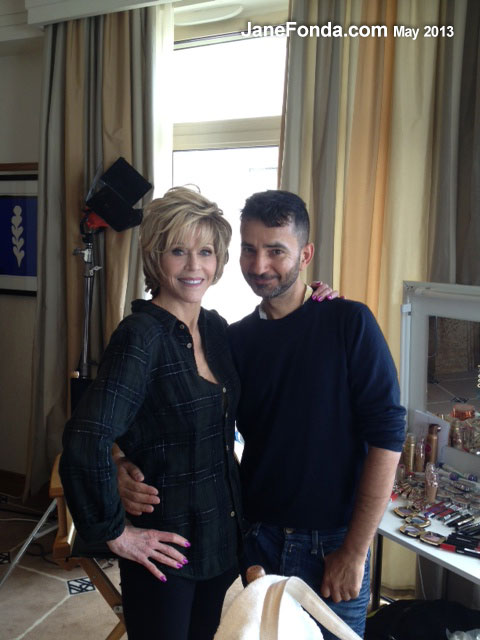 That's Juan Carlos next to me who styled my hair for all the photos and red carpets.

Norman was doing a group photo, the kind that covers two magazine pages, with all L’Oreal’s female brand ambassadors. But as we weren’t all in Cannes at the same time, he did us in small groups. I was photographed with my friend, the Spanish actor, Paz Vega (on the far right), and French/Algerian actor, Leila Bekhti, who, like me, had been filming in Paris. We shared thoughts on how hard it is to break the rhythm once you’re into a film and travel into such an unreal world as is the Cannes Festival. 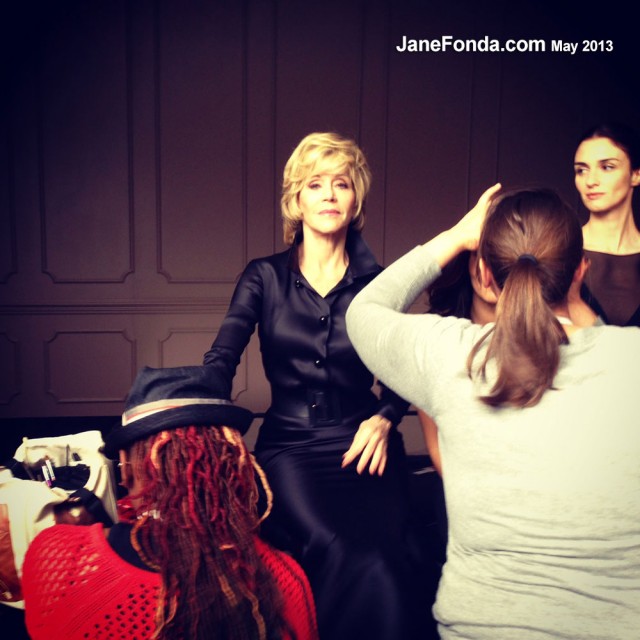 The makeup gal is standing in front of Leila in this picture. But look how beautiful Paz is! We had to pretend to be conversing with other women who, in the final photo, will be photoshopped on either side of us where now there are only chairs with their names taped on. Then, Norman put a film camera on a dolly track and as it moved past us we had to say bits of dialogue such as, “My preference is always color riche” and “because I’m worth it.” Leila and I got the giggles . . . more like the guffaws. I had tears running down my cheeks and whenever we’d try it again, we’d catch each other’s eyes and start laughing all over again.

This video doesn’t show the moving part of the shoot but gives you a sense of the set up.

When that part was over, Leila and Paz left and I put on an Armani white shirt and did a solo photo shoot with Norman for the skin care product for “Mature Skin” that I use and love. 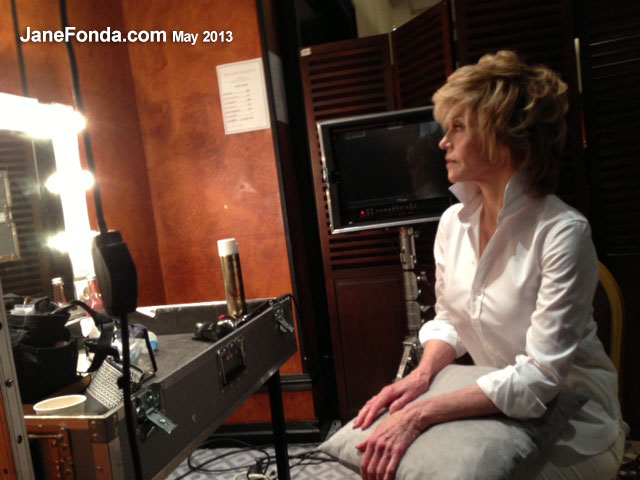 Here I am with Norman and Maite, who runs the publicity shoots for L’Oreal, looking at what we’re shooting on the lap top. 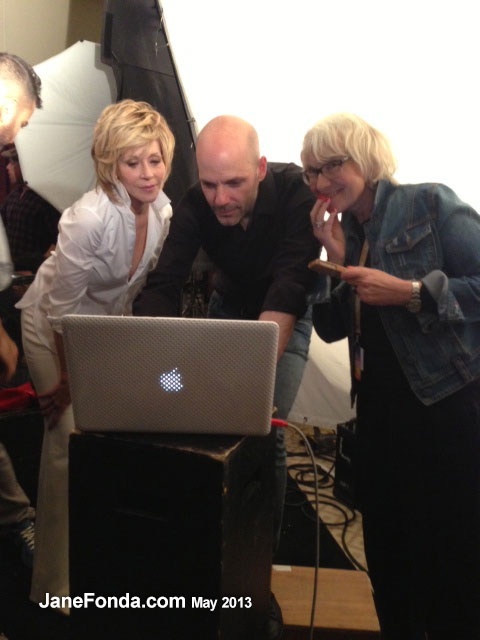 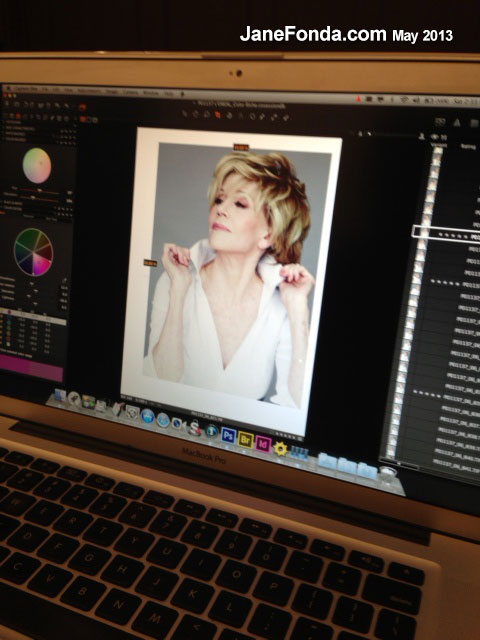 That first evening, I hosted a small dinner prepared by two 5-star chefs for the Swedish company Electrolux. I had always associated Electrolux with the vacuum cleaner but they have a cutting edge line of modern kitchen equipment . . . ovens, steamers, etc. Very impressive. 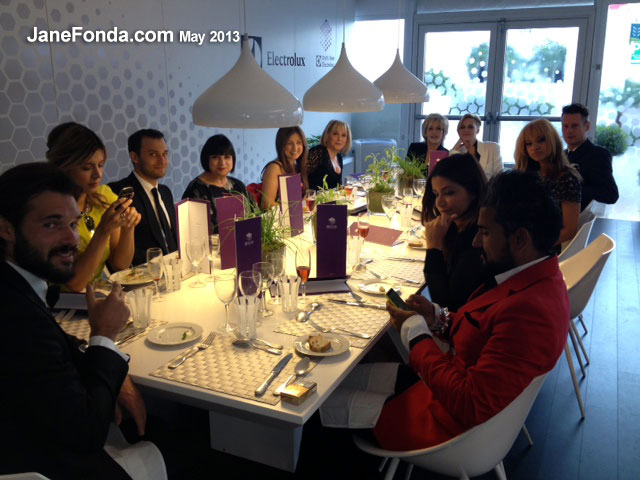 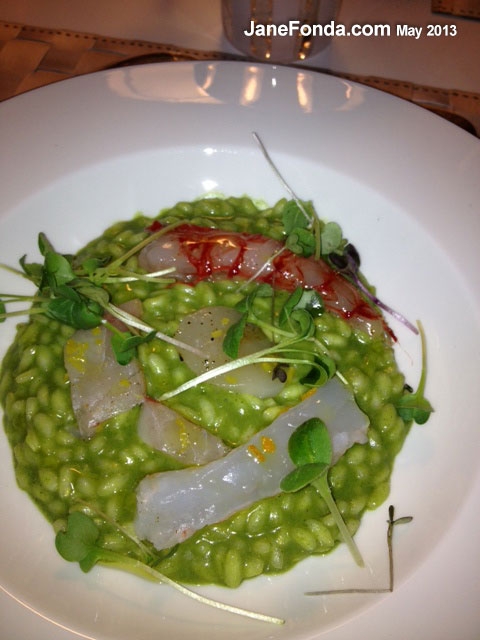 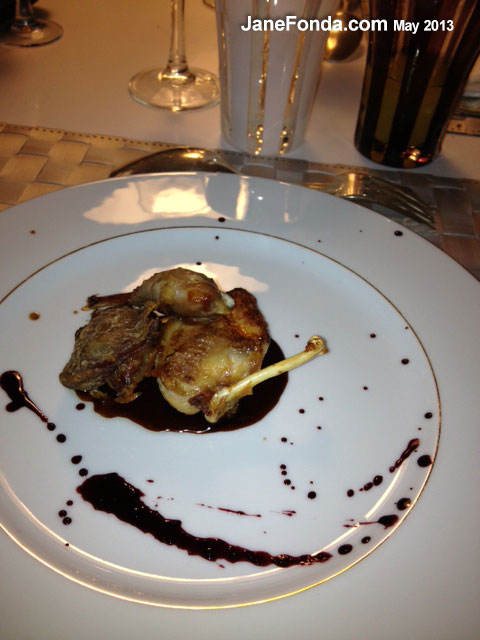 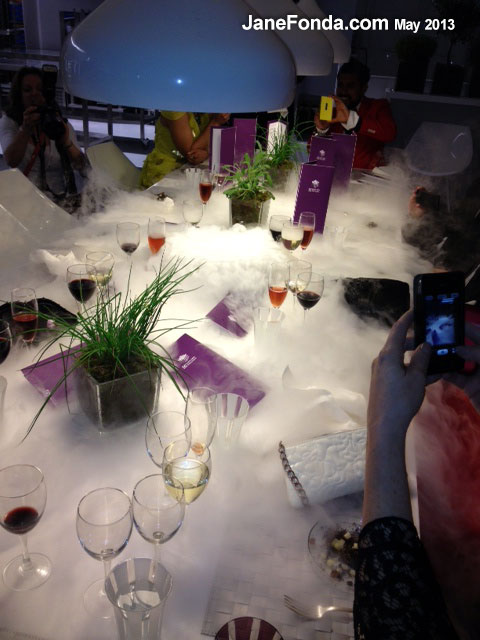 The dessert arrived in a plume a smoke. Kind of beautiful. Hilary Shor, producer of “The Butler” sat on one side of me and Aimee Mullins on the other. We had a nice, long, opportunity to catch up. Aimee is always interesting, deep and challenging. Hilary told me that “The Butler’s” release date has been moved to mid August by the Weinstein Co which is distributing it.

Reaction to the screenings has been beyond belief, I’m told. 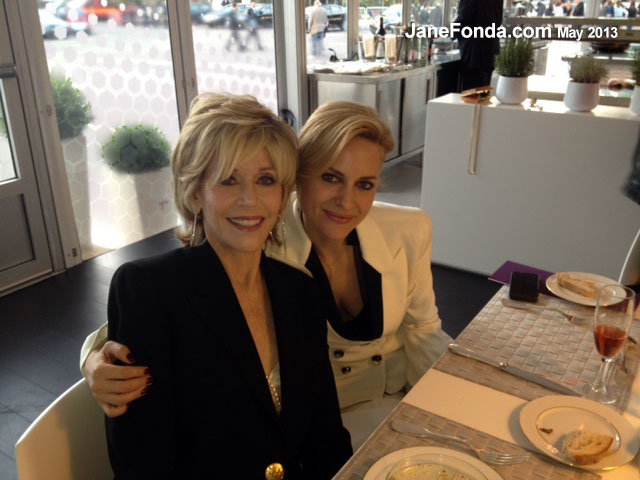 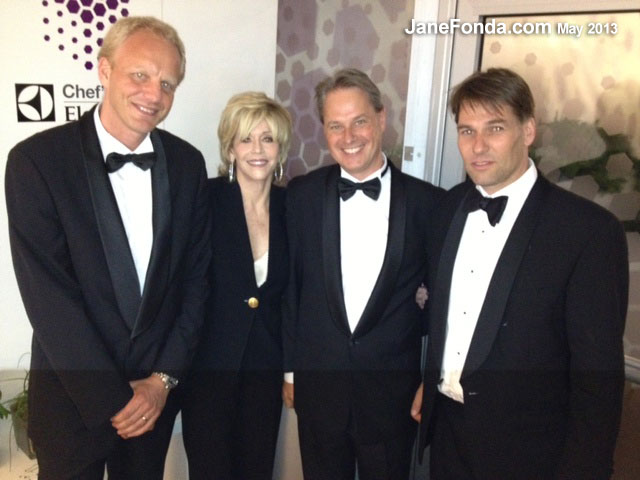 The next night was my first red carpet wearing this Armani gown. Here I am with Michael Angel in the fitting room where we all dress. Michael has become a dear friend. 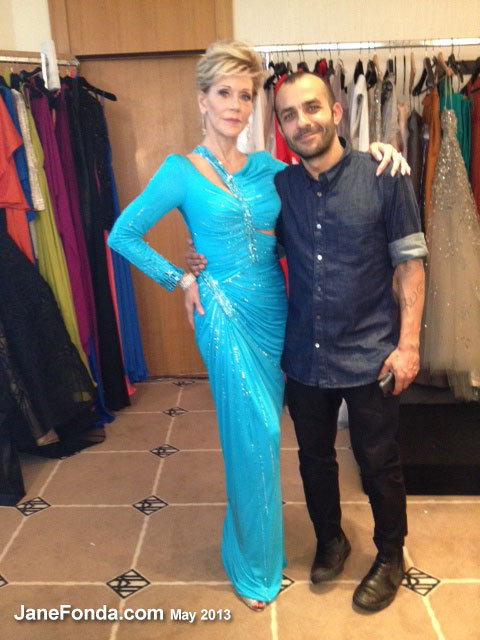 Here I am in the car heading to the red carpet. It was pouring rain. 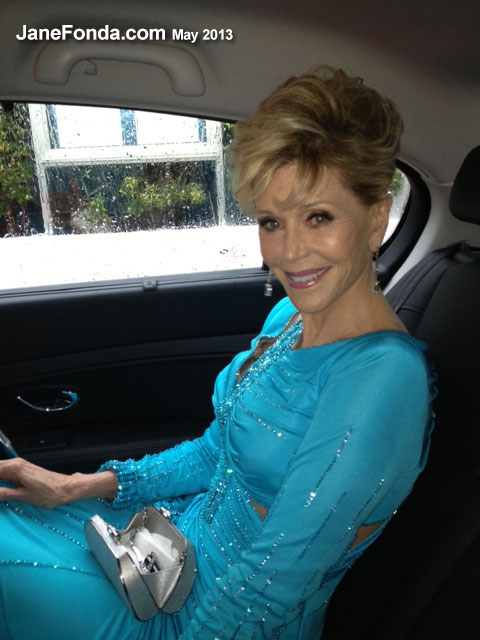 I sat with Eva Longoria to watch the film that stars Benicio Del Toro, “Jimmy P (Psychotherapy of a Plains Indian),” in which he plays a Plains indian, incredibly movingly and accurately, I might add.

My final night in Cannes, following a day full of magazine interviews, I wore a Badgley Mischka and how bout the necklace . . . it’s a Choppard ruby! I had an enormous guard with me the whole night. 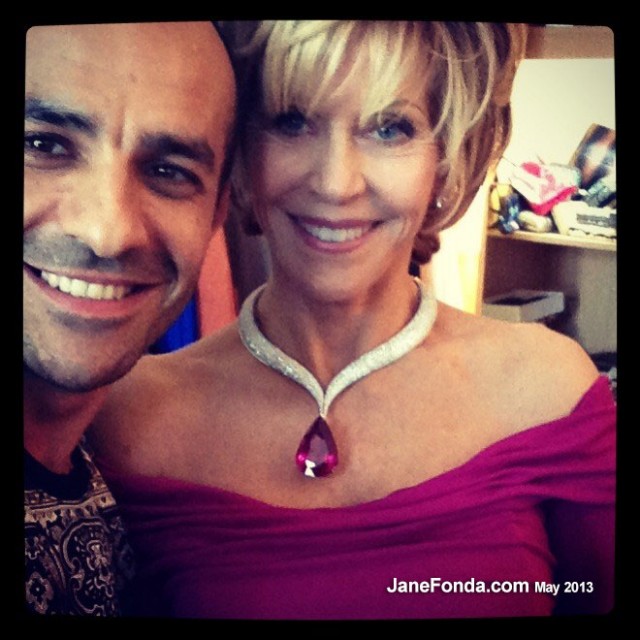 The wind during the red carpet was just about hurricane strength but we got by. Here are some shots to give you an idea of what it’s like. 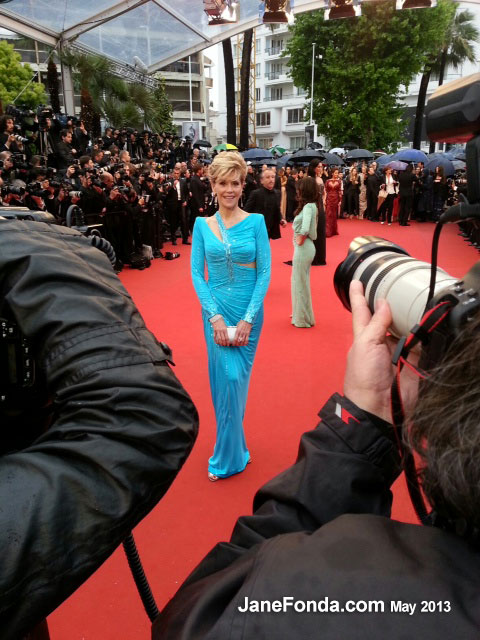 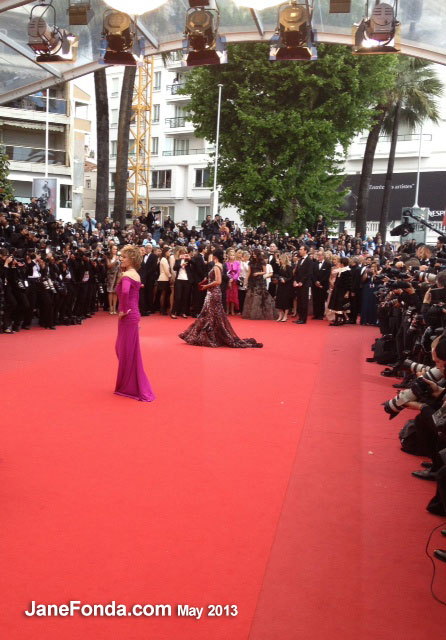 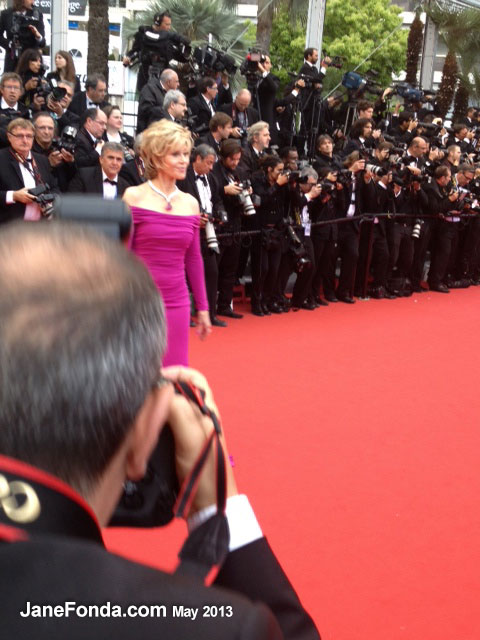 I sat right in front of the Coen brothers who got a lengthy standing ovation as did the film’s star, Oscar Isaac. Justin Timberlake, Carey Mulligan, John Goodman (and Adam Driver) are all excellent. This is a very beautiful, exquisitely observed film that will likely receive many nominations, including an Oscar nom for Oscar. I was touched to see Frances McDormand, who is married to Joel Coen, wiping her eyes cause she was so moved when the applause and cheers refused to stop. 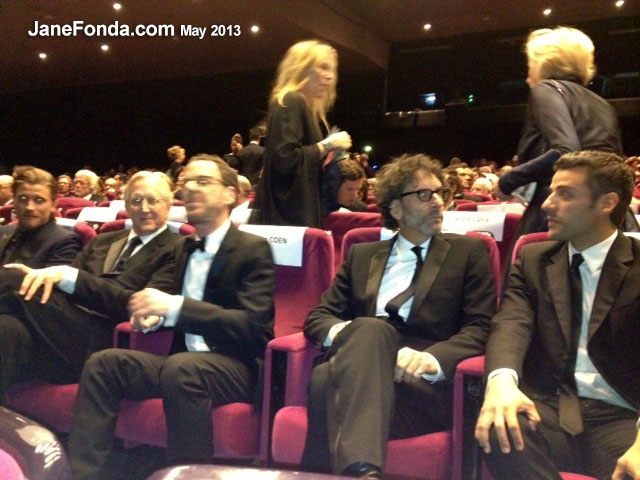 After the film I went with my publicist, Pearl Servat, to the party to celebrate the launch of the French Vanity Fair. Jessica Chastain, Danny Huston and Charles Finch, writer, director, producer, and developer of global brands through his company Finch & Partners (an old friend of Richard’s) were there and Paz Vega sat right across from me. We had a blast.

From there, I went to a big event that Eva Longoria hosted at the Carlton Hotel to raise funds for one of her foundations that assists under-served girls to go to college. Eva had just sold a date with herself for over $100,000. She does these things with such ease and grace. (By the way, along with all the many things he does, she’s managed to get her Masters degree from UCLA in Chicano studies! She left this morning to return to Los Angeles for her graduation). At her party, I had the pleasure of spending some time with Roland Joffe, who directed such masterpieces as “The Mission” and “The Killing Fields.” He’s still filled with passion to make the world better. I saw fire in his eyes. I want to try to help him with one of his endeavors.

I went with Pearl to the Weinstein Co. party on the beach but it was already 1:30am, it was jammed with young things none of whom I knew and Harvey had already left. So I went to bed by 2:30 and am about to board my Delta flight back to NY. Excited to be reunited with the film . . . and Tulea, who Debi has been faithfully caring for in my absence. Fortunately Debi’s as much a dog person as I am. Tulea adores her.

I started reading “Last Stand: Ted Turner’s Quest to Save a Troubled Planet” by Todd Wilkinson on the plane over. It is a beautiful, important book, a must-read for anyone entrepreneurial, anyone in business, anyone who cares about the environment. I lived through much of it with Ted but I’m learning so much from this book and have sort of fallen in love with him all over again. There’s nobody like him. What a mind. And it’s exciting to see that his thinking and wisdom has deepened even more since we separated in 2000. I will now try to finish it before we land in NY.