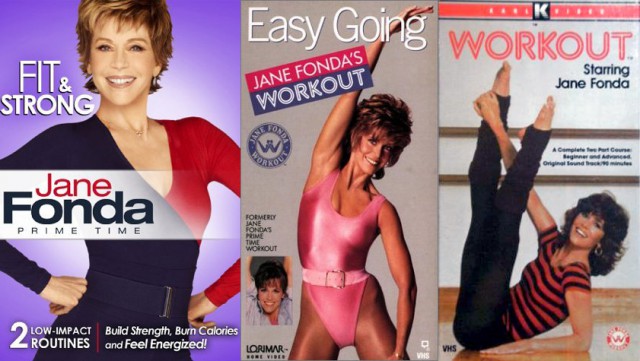 Today is the 30th anniversary of the release of first Jane Fonda Workout Video. It feels like yesterday and 100 years ago. I’m sure you’ve had that same feeling. Still fresh yet so much water under the bridge. I am so different. The world of Fitness is so different.

Let me begin: It was 1980 or ‘81, I think. Stuart Karl came to me to ask me to make a video of the exercise routine that appeared in my first Jane Fonda Workout book. His smart wife, Debbie Karl, had read the book and suggested the idea to him. Stuart was the only person back then who made home videos. They were home improvement videos, I believe, that sold a few hundred. No one I knew even owned a VCR player. It was way too expensive and there had never been a product that anyone wanted to use over and over that would justify spending that kind of money on the expensive hardware.

At first I said to Stuart, “No way, I’m an actor and it would be bad for my career.” We’ll, I’m not sure I actually said that but that’s what I thought. I had real misgivings. But Stuart was persistent. At the time, my wildly successful Workout studio on Robertson Blvd in Beverly Hills had been open about 2 years and the business was owned, not by me, but by the political organization that my then husband, Tom Hayden, and I had founded…The California Campaign for Economic Democracy (CED). That’s where all the profits went. I finally decided, “what the heck, it won’t take long, not too many people will see it and a video will bring in a little extra funding to CED.

No one had ever done a fitness video before. I remember writing the script on the floor of a hotel room during a Christmas skiing vacation in Calgary. It was spit and prayer, flying by the seat of our tights and leg warmers. (I always wore leg warmers because my real love was ballet and ballet dancers wore leg warmers.) Sidney Galanty, who had done the campaign ads for Tom’s U.S. Senate campaign, was the director. I used some of my Workout Teachers and clients in the video with me. We rehearsed a few days, made some mistakes, did our own hair and makeup, had one camera and figured it was no big deal.

Was I wrong! I don’t remember exactly when I realized that, in spite of myself, this little Workout video had given birth to a new industry. Women began to hear about it. Friends were telling each other, “Hey, check this out! This really works!” VCR players became cheaper as the demand grew and, before I knew it, 17 million of that original video had been sold (all profits going to CED) and I was inducted into the Video Hall of Fame—the first non-engineer to receive that honor.

BTW, the first Jane Fonda Workout book was #1 on the New York Times Best Sellers list for two years! That’s when the decision was made to make separate categories for How-To books. It was shameful: a fitness book ahead of Philip Roth or Joan Dideon, I mean come on.

I made 23 more videos and now 6 more DVDs under my new Prime Time Label cause I saw that no one was addressing the needs of seniors and boomers.

The fitness industry has changed mightily. Fast bouncing and a lot of what we did back in the early 80s has gone out of favor. Core training is where it’s at and exercise physiology has made important strides in understanding what different bodies need for different purposes. As leg warmers come in and out of fashion, Women know it’s okay to have muscles, and Fitness Industry is a thriving international business.

Yes…it was just yesterday…and a lifetime ago