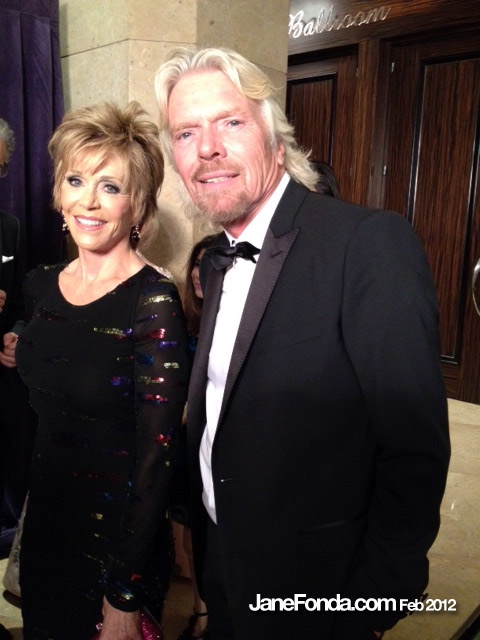 Like many others who were invited to Clive Davis’ annual pre-Grammy party, Richard and I wondered if the party would be cancelled when Whitney’s death in her room at the Beverly Hilton was announced. Kathy Griffin and a few others emailed asking if I thought it` would go on and if we were going. I emailed back saying I was certain it would not be cancelled.

As we pulled up to the entrance of the hotel we could see fans milling about. At the entrance to the red carpet area where all the cameras were I saw Richard Branson and gave him a hug. At the request of Neil Portnow, President of NARAS that organizes the Grammys, I had called Branson to ask if he would attend and accept the Music Industry Icon Award, and here he was, glorious with his handsome face and blonde mane. But I decided not to walk the red carpet. I couldn’t imagine having to answer question after question about Whitney and the tragedy that had just occurred.

I met Whitney only once—in 2009, at the Beverly Hilton, when Clive had organized a “listening party” for music industry people to hear her ‘comeback’ (and last) album. I had just begun dating Richard which is why I was included. I had been stunned when, after giving Stevie Wonder a hug from the stage, she had called me up for a hug . . . She knew I’d been in Atlanta for 20 years and perhaps felt a kinship because of that. I felt kinship, no question. Needless to say, I was deeply touched having long been in awe of her voice and her beauty. I remember seeing her daughter and other family members sitting near us in the audience, so happy for her and her heralded return to music.

Last night, the mood in the ballroom before the show began was somber and there was a slight sense of disorientation—do we dare enjoy seeing old friends? Do we laugh? But then we moved into the ballroom and I had to give a big hug to another gal from Atlanta—Gladys Knight, and to my “Cuz” Quincy Jones, and to Jackson Browne (who I hadn’t seen in decades but used to know very well), and Carole King, Joni Mitchell, Neil Young, Rita Wilson, who has just done an album, and is always huggable and filled with joy. I turned from her to see Kim Kardashian, looking pretty breathtaking. We chatted for a moment. I was taken by how friendly and unassuming she seemed. Turns out we share the same publicist. No wonder Pearl is so busy. I didn’t know.

Eventually Clive came out. He was silent for what seemed like an eternity, just standing there before the mic. No one spoke. We all understood. And when he did speak, it was perfect. We felt his anguish. He said, “Whitney would have wanted this to go on.” And (I’m paraphrasing), “It seems right that all the people who so loved and admired her can be here, together, to honor her and pay our respects and share our pain.” Then he called for a moment of silence.

Starting with Tony Bennett (his voice lovely and strong), almost every performer said something about what Whitney had meant to them. P. Diddy was extremely articulate and spot on. The women all called her their inspiration. Alicia Keys was deeply powerful, sitting at the piano, playing softly as she spoke about her friendship with Whitney who once flew all the way to some out-of-the-way place where Keys was performing just to hang with her and support her. She told how, as a young girl, she would sing in the mirror to Whitney’s albums and how life-changing it was for her when Whitney was the first black woman to appear on the cover of Seventeen Magazine.

I watched Piers Morgan when we got home and the interviews with the CNN reporters who were on site for the event seemed to make it appear like a weird scene with the party going on inside and fans outside singing I Will Always Love You. It was only then that I realized that for at least part of the evening, Whitney’s body had still been in the hotel. But those of us at the party didn’t know that and the atmosphere inside was anything but weird. It felt very right under the circumstances.

Some of it was subdued and some of it rocked. Clive held it all together. I got a chance to put my arms around him just before going on to present the Icon Award to Richard Branson. I felt his body filled with sadness.

In his acceptance speech, Branson said that his past with me had been painful and he told the story of how, at the advanced age of 15 or so, he had been circumcised. The next day he watched Barbarella and it caused him to burst his stitches. The first time I heard the story was when I first met him at Earth Day in, I believe, 1992. I called him up on stage to give him an environmental award and he recounted this before the assembled thong of a thousand or so people and left us all slack-jawed—did he really just say what I think I heard?

At the end of the evening, Diana Ross was celebrated for her Grammy Lifetime Achievement Award. A group of people with a mic walked to where she was sitting and, singing Ain’t No Mountain High Enough along with her, walked her to the stage where she finished by singing it to Clive and then falling into his arms.

I guess I’m telling you this smattering of details to give a sense of how, in spite of the emotional complexities of the evening, life goes on, we react to the moment. We momentarily forget our grief and then it hits us again.

This morning, as I watch all the news coverage, especially CNNs special on Whitney, I cry all over again. It is so difficult to accept that the one with the voice that soared like an angel could have fallen. As my daughter-in-law says, “we did not want her story to end without knowing that she had beaten whatever demons haunted her.” Yes!