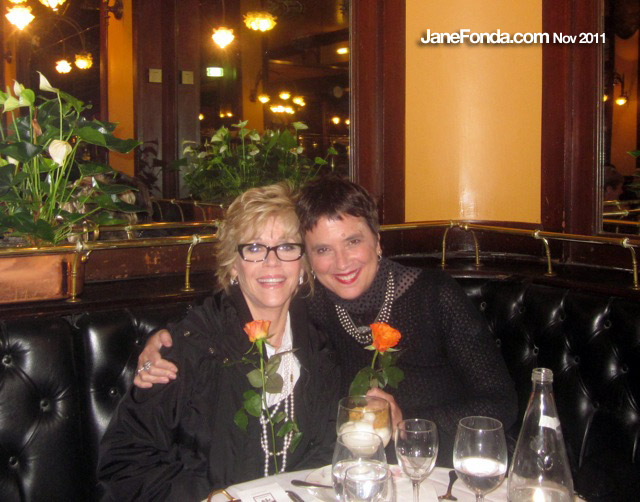 Eve Ensler just came over to visit me. I haven’t seen her in many months. Too many months, because being with Eve opens my heart and lifts my spirit. I have known Eve since the end of the 1990s when our mutual friend, Pat Mitchell, brought her to Ted’s flagship ranch in Montana where I was having a women’s weekend sleepover—7 or 8 women friends, most involved with CNN in some capacity. We all slept in a big tent, cooked out, did a sweat lodge (built by friends of mine from the Lakota tribe), threw ourselves into the cold river and talked late into the night. Eve and I bonded right away. It’s hard not to bond with Eve –unless you’re bothered by fearless energy and grand vision.

Eve, for those of you who don’t know it, is the author of the iconic play, “The Vagina Monologues,” among many others. She was incested for years as a young girl and, instead of being a victim, she became a warrior, writing about women and girls and their bodies, their sexuality and how to reclaim their power when it has been wrested from them. The non-profit organization which grew out of the play is called V-Day: Until the Violence Stops…(‘V’ for Valentine, Vagina, Victory.) The Vagina Monologues has been performed all over the world—literally—and the money raised from the productions supports local efforts to stop violence against women and girls—in Haiti, the Philippines, Croatia, Greece, Egypt, all over the U.S., Europe, you name it . This Valentines V-Day there will be 5000 productions in 2000 locations!

Working with women in East Congo who have been victims of rape and torture, V-Day has built The City of Joy—a place where 90 women can live, study, heal, learn skills, dance, sing, They live there for 6 months and then they return, in teams and with new skills and courage, to their villages to help heal others. They will soon buy a large farm near the City of Joy, big enough to build a factory, to farm fish, pigs, chicken, rice, and become self-sufficient. 90 new women and girls, the second “class,” have just come into the City of Joy. Everyone who has been there and witnessed the women’s transformation, come away with the renewed sense that deep change is possible, even in the worst, most violent of circumstances; that the City of Joy can become a template for change. I urge you to go onto the V-Day website (listed on my homepage) to see more of what they are doing.

Almost 2 years ago, Eve was diagnosed with fistulated ovarian cancer. She almost died. The night before she went into surgery, she said to me on the phone, they’re going to open me up and find the stories of all the women. She was right. The women in the Congo with whom she works suffer from fistula. Because of rape and torture the wall between the vagina and rectum is ruptured. We almost lost Eve. She suffered unbearably. She survived. She experienced all this with a courage and force that none of us had ever seen. She allowed the cancer to change her, to “burn away the dross,” as she put it. I didn’t think she could become a deeper, braver person but she did. And it taught us all—all of us who know and love her. She has written about her cancer. One article, “Congo Cancer,” was in the Huffington Post. Check it out.

But now she is traveling again. All over the world, delivering her message: “We must stop violence against women and girls and when we do, everything will change”. 1 billion women have been sexually violated so Eve has created a growing movement called “One Billion Rising.” Next year, Valentines Day 2013, a billion women will get up from their tables, their desks, their cars, and go into the streets and dance and sing—raise our voices, our spirits, our determination to make a difference and to feel our numbers.

So why am I writing this now? Well for the last few days I’ve been feeling sad. In a funk. Maybe some of it has something to do with Whitney, even though I didn’t really know her, just enough to feel the loss of someone who seemed ready and wanting to turn things around for herself.

My friend Eve shows up and I begin to appreciate all over again the importance of my female friends. The bonds that we share with each other are so important to our overall health and well being. With Eve, I am immediately reconnected with my essentially optimistic spirit. There is much to be optimistic about. We are optimistic because of the 10s of 1000s of small organizations—non-governmental organizations—all around the world that are making a difference and all the beautiful individuals who founded them and run them and so have given their lives greater meaning beyond themselves. The Occupy Wall Street movement is but one example. In the beginning, people said, “Oh but they have no leader. They have no strategy. Just a rag tag bunch of ner-do-wells.” Well they’re making a difference. They’ve changed the dialogue. And it’s not over. There are things happening all over the globe and I feel a change coming. Actually, according to the Mayan calendar (and other sources), 12/21/12, the next Winter Solstice (which happens to be the day I will turn 75) is the day there will be a global (cosmic?) paradigm shift. I choose to believe it will a shift away from ego dominance to a feminine paradigm.

Eve has gone now, leaving me reenergized and recommitted to do all I can to speed up this paradigm shift and ensure it tilts the right way. Some of us can do it in big ways and some in small ways but we can all make a difference.