I recently posted a picture on Facebook ( http://www.facebook.com/JaneFonda) and Twitter (@JaneFonda) of my dog, Tulea, with her foot taped up and received hundreds of responses! The letters of concern, advice, condolences, touched me so much. I tried to tell Tulea how many people were concerned about her but all she did was lick my face. 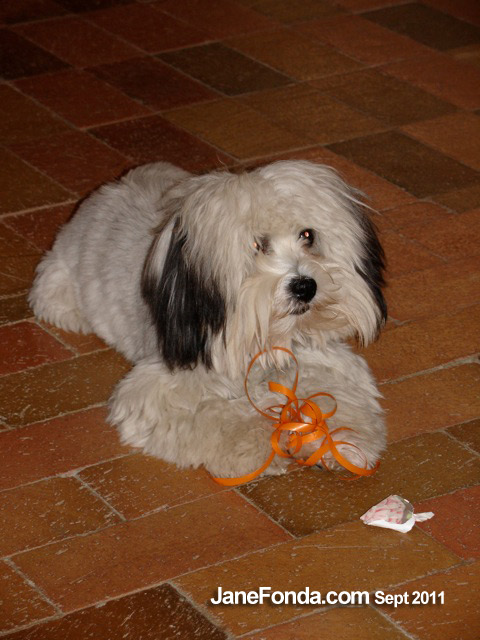 Tulea when the hair was still black on her ears

She had been chewing so much on her right toes that they got all red and swollen and I was worried so I took her to our wonderful vet who said it was an allergy though they couldn’t tell me what she is allergic too. Anyway, she got a cortisone shot, some antibiotics and three days later the bandage came off and all seems well. I want to thank all of you who expressed concern and offered advice and sympathy.

There seems to be some misunderstanding about Tulea’s breed so let me explain her background and how she came into my life….but let me first fill you in on my dog ownership history so you’ll get the full picture 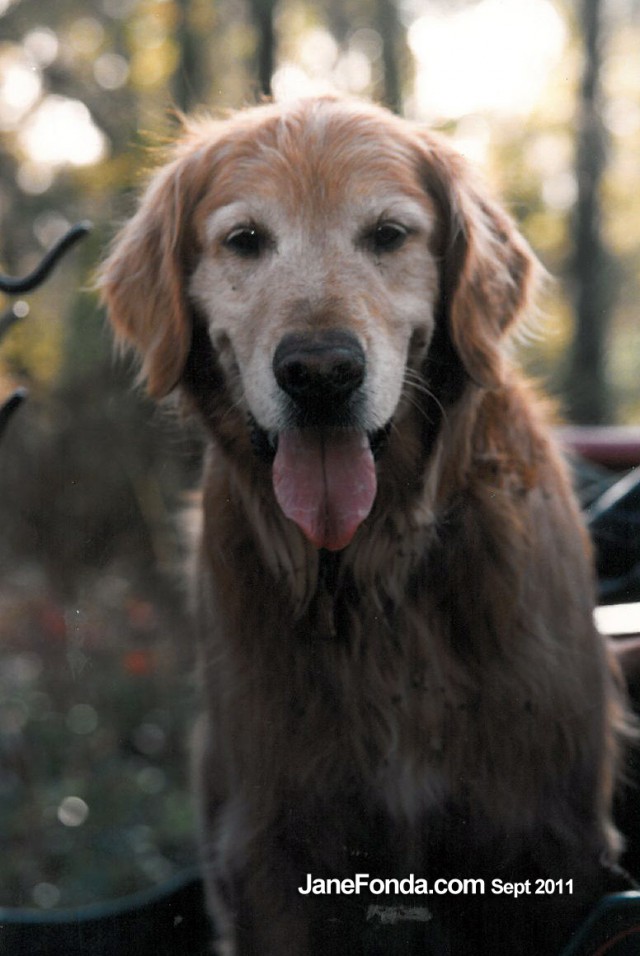 I had always been the owner of Golden Retrievers ever since my husband, Tom Hayden made me put a scarf over my eyes one Xmas and placed a puppy in my arms. That was Spencer, so named because he was a red-head, like Spencer Tracey. (This was pre-On Golden Pond.) Spencer lived for 13 years. He died of cancer. I adored him so much that I put him through chemotherapy, something I would never do again, no matter what. You can’t explain to a dog that it’s for his own good. I was married to Ted Turner by then and we were on one of his ranches in New Mexico. The vet was an hour away so I moved in and slept with Spencer in his little cage at the hospital while he went through the chemo ordeal. I cried every night. When it became clear that he would not survive and was suffering, Ted and I decided that we would let him finish his days doing what he loved most: being with us in a boat on Ted’s ranch watching us fish for bass. Then, when the time came, Ted came with me to the hospital and I held him while the doctor gave him the injection. In the instant before he died, he turned his head to look at me. I sat there sobbing for so long and then Ted came in and we sobbed together.

I had Spencer cremated and we sprinkled his ashes on what was once a Native American vision quest sight where I sometimes went to meditate. Ted and I had decided we would be put there as well when we died.

I was still in deep mourning a few weeks later when Larry David (“Curb Your Enthusiasm”), his then wife, Lori, and the whole team of Castle Rock Entertainment (Alan Horn, Rob Reiner, Jerry Seinfeld and their spouses—Ted had just bought their company) came to spend a weekend with us in Montana. Larry and Lori David heard the whole story of Spencer and his passing. Seeing how sad I was, they said they had a Golden Retriever, Roxy, that they could not keep. She was 4 years old but they had a newborn baby and another Golden Retriever and they said Roxy was just too rambunctious for their household. 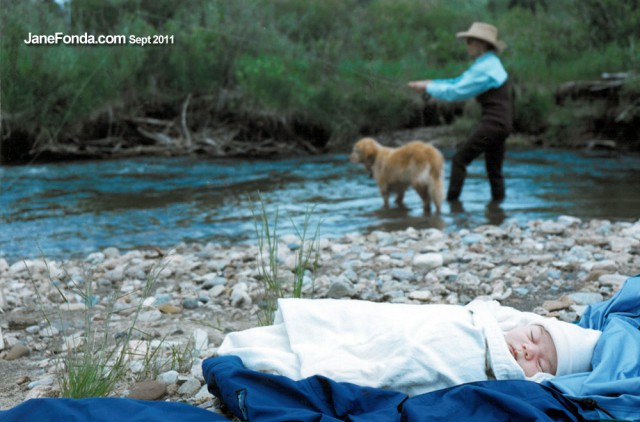 I said I thought Roxy and I should go for a blind date before any commitment was made. The following week I flew to L.A. and went straight to their house. When I walked into the living room, I immediately saw Roxy, sitting on the stairs, looking right at me with a big grin (never mind that Golden’s always have grins. This one seemed just for me!), a big bow on her collar, and what looked like black eyeliner around her eyes—you know, like the kohl that Indian women wear. She was a knockout, pure and simple. Smaller and a lighter blonde than Spencer, Roxy stole my heart then and there. I drove her back to the dog-friendly Santa Monica Lowes Hotel where she tore around, leapt onto the bed and made me understand why the Davids didn’t feel they could handle her and a baby. What I realized with 2 days of having her back at the ranch in Montana, was that all Roxy needed was a lot of exercise and outdoor adventures. The moment I took her fishing with me, she leapt into the river and was swept downstream, having no notion of how to swim to the opposite shore. I remember vividly how she looked back at me, her face just above water, her eyes saying, “Help, Mommy, what do I do now?” She soon learned!

The first time she came horseback riding with us (it was summer and hot) she tried to walk right underneath the horse—in the shade—before being stepped on. But she was smart as all get out. It didn’t take long for her to learn what was in her genes—retrieving. I quail hunted in the fall and winter with Ted (we always ate what we shot) and within a year, Roxy would descend 300 feet down into a steep canyon to retrieve a quail I had shot and bring it back up to me. No mean feat, let me tell you!

Roxy was with me for 6 years until she died at 10. I was making “Monster-in-Law,” and it happened over a weekend, very fast. Total systems failure, the vet said. Once again, I held her in my arms, sitting on the floor of the Santa Monica Animal hospital when she was given the injection. I sat for an hour crying my eyes out. The first person I called was Ted, and we both sobbed. We were divorced by then but I knew he was the only one who would understand because he loved her too. 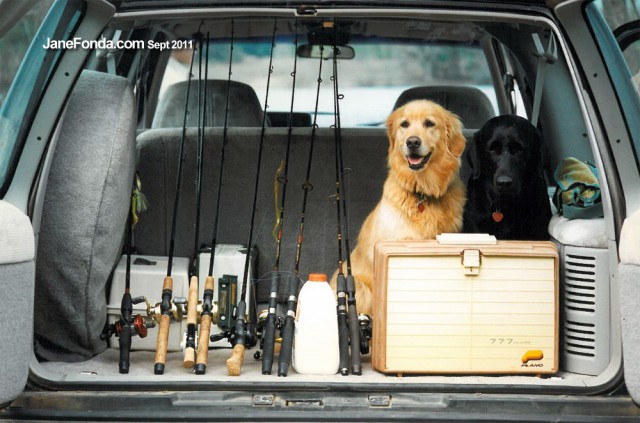 Spencer and Chief ready for Fishing

Which brings me to Tulea. I travel a lot. If you travel a lot, you can have a big dog if you have a yard and housekeeper or a rich husband with a plane. (Ted’s black lab, Chief, and my 2 Goldens, Spencer and Roxy) traveled the world with us on Ted’s plane. But now I was single, no plane, no yard. I needed a small dog. But what kind? I like Westies a lot and was considering one of them but then one day, while filming on location in a home in Pasadena, 2 small white dogs came in from their walk. They were the owners dogs and she told me they were a breed called Coton de Tulear. What? Never heard of them. Neither had she, she said, until one day she was watching the Oprah Show. Barbra Streisand was singing to her dog on the show and the name of the breed was up on the screen. The owner had found a breeder in California and got herself two of them.

Turns out it’s a breed from Madagascar that originated when that island was a French colony. Coton means cotton in French and Tulear is the town where they were first discovered. (Being a French word, you don’t pronounce the ‘r’ unless there’s an ‘e’ after it. So it’s pronounced Tulea) Legend has it that the French pirates marauding in the seas around Madagascar always had Bichon dogs. They were the breed favored by the pirates. I guess they went after the rats on board. One day there was a terrible storm, many pirate ships were wreaked and the bichons swam ashore at the town of Tulear where, in time, they mated with the locals and, le viola, a new breed was born. This was in the 1500s. The dogs were gentle, with hair, not fur, and hypo-allergenic. There were very few of them and for several centuries, only royalty were allowed to own them. They were particularly prized for being able to be placed into the crib of even the most colicky royal baby and calm her down in no time.

I knew right away that this was the small dog I had been waiting for. BUT, I didn’t want an all-white coton. That seemed too chi-chi for my outdoor living style. The trouble is, they are white by nature. Very hard to find color. I found a breeder in Montreal that bred for color. I wrote and said I wanted a dog that was black and white. A few weeks later, she emailed me a photo of the 2 week old puppy. Half the face was white and half was black; she had a back ring around her shoulders and around her tail. It was perfect and I was hooked! I was in the middle of a global tour to promote my memoirs, “My Life So Far,” but I took time to fly to Montreal and there, in the airport, the exchange happened. She was the runt of the litter the breeders told me, which suited me fine. She weighed like a feather and was the length of my hand. (She still only weighs 6 1/2 lbs.) She was so mellow I asked them if they’d given her something to calm her down. They laughed, assuring me that was her temperament. Most Cotons are mellow (though not all) and Tulea has remained that way. People are amazed. She can be on my lap through an entire lunch and only when I stand up to leave do people realize I’ve had a dog with me.

Over the 6 and a half years she been with me, the black has turned to gray —it’s those genes calling–but I don’t mind. (See how she used to look in some of the photos in the Tulea section on my blog).

She goes just about everywhere with me and when I am without her I ache for her. It’s a physical thing. I feel a pang in my body and it’s harder to sleep. She follows me like a shadow and is so smart. She waits for permission to get up on the bed. She hops into her carrying case in the airport when I say “in”! She knows when I am going out without her and goes into a corner, all hang dog, and waits.

So that’s the story of how Tulea came into my life. Smaller dogs live longer than big ones, so I figure I’ll be around 83 years old when she dies. What do you think: does an 83 year old person get a new dog? All that leaning over to house break etc. Whaddaya think, huh? 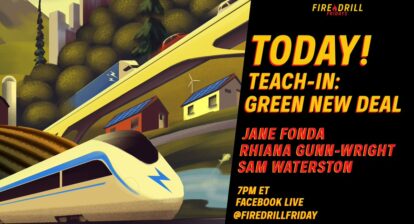 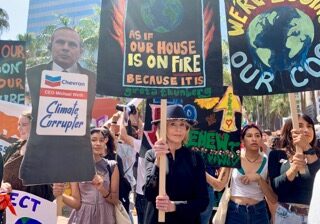 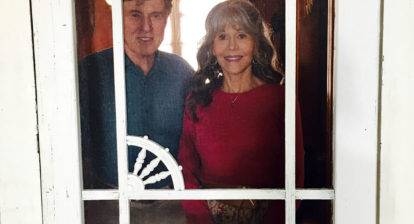