After the Vanity Fair dinner, we moved into the area where the party was to start once the people who had been at the Oscars (including the winners) began to arrive. There were a few friends who were fun to talk with—George Hamilton, George Schaefer who produced “Laugh-In” back in the day, Roger Freidman. Then the place really filled up and I got to see Kathryn Bigelow. Two Oscars in tow like a weight lifter. She seemed to be in a total daze and couldn’t wipe the grin off her face. No wonder. I was able to greet Meryl Streep who looked fabulous and was her charming and laughing self. You may not know it but Meryl’s first film was in “Julia” with me and Vanessa Redgrave. I saw she was en extraordinary talent even then. Rosario Dawson and her really nice, french,  DJ boyfriend, Mathieu Schreyer. Spent time with John Singleton who is very smart about movies and full of integrity. He directed “Boyz in the Hood” and produced many others including the brave “Hussel and Flow.” Marisa Tomei had fun with us. Talked with Jamie Foxx and Tyler Perry who harks from Atlanta like I do. Got to hug Jennifer Lopez who, I have to say, looked smashing and had the best dress (though she wore a different one, black, at the party). Met Natalie Portman in the bathroom and that was a treat as I admire her work very much. Was able to congratulate and hug Sandra Bullock. My son Troy and Simone were there and I always have more fun at a party when they are there. Sat next to my brother Peter for awhile. Sorry I didn’t get to see Jeff Bridges or Jim Cameron. Nor did I take many pictures. I didn’t feel right. A few at the pre party dinner where we ate and watched the Oscars. I did a lot of tweeting then. Even more than Jackie Collins. 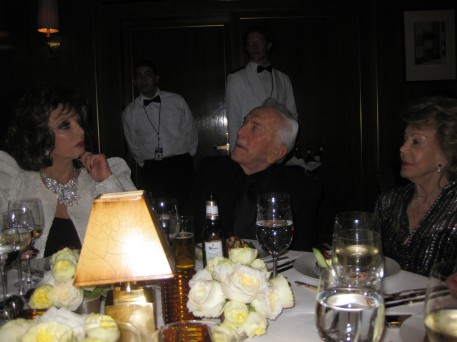 Joan Collins with Kirk Douglas and his wife Ann at the dinner, watching the Oscars 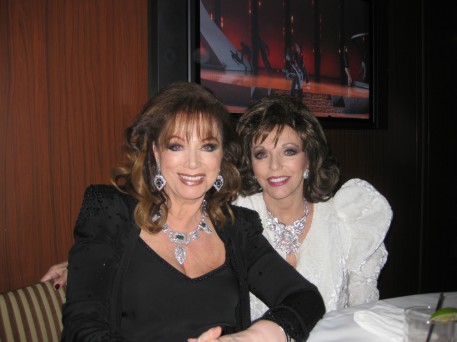 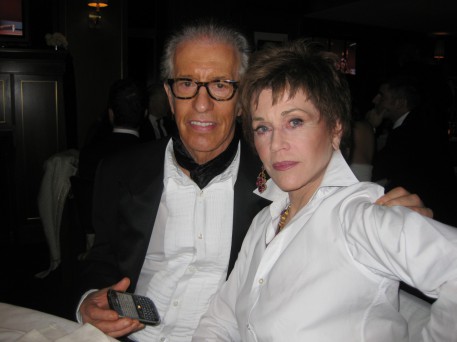 Richard and me at the Vanity Fair dinner 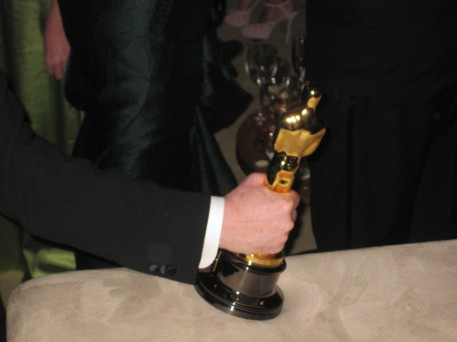 Hand of the director who won best documentary, "The Cove," grasping his Oscar at the Vanity Fair party