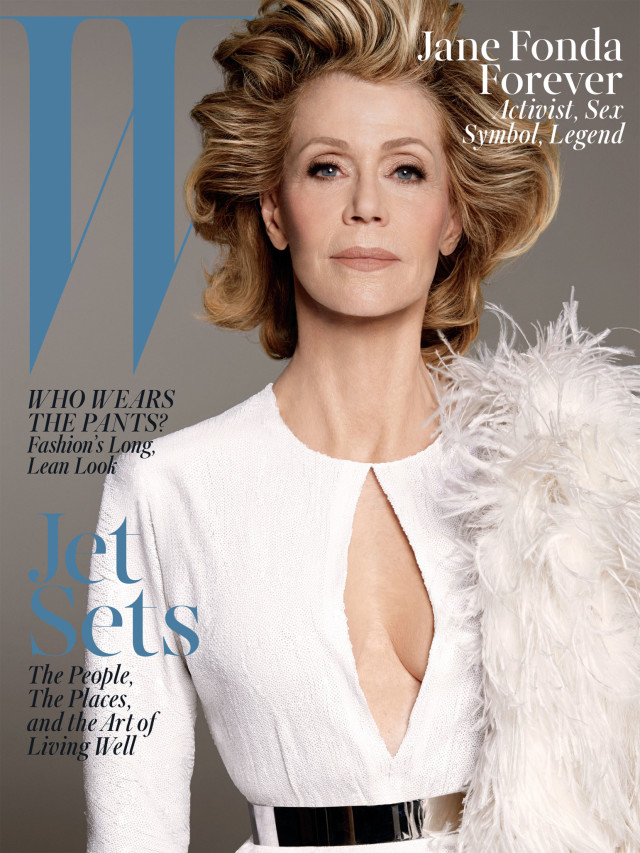 May 19, 2015 | by Lynn Hirschberg
Photography by Steven Meisel
Styled by Edward Enninful

“I think it’s a hoot that, at my age, people are calling me a fashion icon,” said Jane Fonda, who freely admits to being 77, on a beautiful spring evening in Manhattan. She was in her small apartment-like hotel room (“I love to have a kitchen”) near Lincoln Center, and she was wearing a chic gray cashmere ensemble consisting of a snug-fitting tunic-length top with long sleeves and legging-like pants that flared at the knee. Her short blonde hair was tucked into a matching gray cashmere schoolboy cap. Fonda had accessorized the vaguely 1970s look with a long gold chain and a large geometric ring that resembled a small planet. Although she says she suffers from osteoarthritis, Fonda has an innate ease in her own body. Perhaps due to a lifetime of ballet and aerobics, she moves beautifully, with no apparent creakiness. Her ramrod posture and lean figure would be remarkable at any age, but for a woman closing in on 80, her presence is staggering.

And that body lends itself beautifully to clothes: At the Grammy Awards this past February, Fonda hit the red carpet in an emerald green Balmain jumpsuit that made the world positively giddy. Not only was the fashion-forward (not to mention sample-size) look straight off the Paris runway, but it also accentuated every curve. Upon encountering Fonda backstage, Rihanna yelled out to her, “Ohmigod! I want to be you when I grow up!”

Fonda laughed at the memory. “Isn’t it weird? In my dotage!” she exclaimed. “Truthfully, my relationship to fashion has always been strained. When I was starting out as an actress in New York, I worked as a model because I needed to pay for acting classes. But I didn’t have what it took to be a model. I hated all the emphasis on how I looked, and I never paid much attention to clothes.” And yet, through her high-profile marriages to three very different men (Roger Vadim, Tom Hayden, and Ted Turner) and the iconic roles she has played on the big screen (Barbarella, Bree Daniel in Klute), Fonda has always stood out for her style. Well before Klute, she had cut her hair into a short shag, a look that became her signature throughout the ’70s and was copied for decades. And while she gives the fashion credit for Barbarella to Paco Rabanne, who designed the film’s sexy space-age costumes, and to Vadim, the director, it was Fonda who ultimately made that movie a style reference point for the ages.