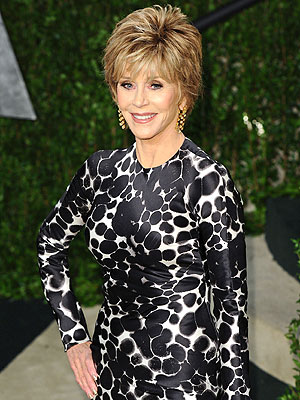 After working with adolescents for more than 30 years, starting with a camp she founded and then working on behalf of various youth social causes, Jane Fonda considers herself a “lay expert” when it comes to teens and their questions about sexuality.

Fonda’s new book, Being a Teen: Everything Teen Girls & Boys Should Know About Relationships, Sex, Love, Health Identity & More, is a frank and candid resource for adolescents.

“I’ve learned a lot. I have a real soft spot for teens, having had a difficult adolescence myself,” says the Oscar winner, 76. “Too many girls do things to please.”

In her own life, she says, “I was a pleaser. I was brought up that you have to perfect, which means don’t show if you’re angry, or if you’re too smart, do what the man wants. It took me a long time to get over all that.”

Fonda, whose mother Frances committed suicide when Jane was 12, says she felt alone most of her adolescence while her larger-than-life father, the esteemed screen star Henry Fonda, was away working.

In the 1950s, confused by the intrigue at the time of the country’s first public trans woman, Christine Jorgensen, Fonda “thought I was not supposed to be a girl because I had no breasts and I hadn’t gotten my period and I was scared to death,” she says. “I spent a lot of my adolescence really, really scared.”

So what advice would she have given her teen self? “I would have said, ‘Jane, “No” is a complete sentence,’ ” says Fonda, explaining that the answer is suitable whether dealing with peer pressure, sex, friendship, relationships, whatever.

For parents of adolescents, Fonda – the mother of three grown children – offers words of wisdom she says were learned the hard way.

“The big mistake parents make is saying, ‘Well, I have to get ready for the big talk. I have to start talking to them about sex.’ ”

Her solution? “Do it now. You have to start really early being an approachable parent. We parents have to do more listening than talking,” she says. “And I say all this as a parent that didn’t do it very well. You teach what you need to learn; I’m not self-righteous. I wish I could go back knowing what I know now.”

The actress is hopeful that teens who have questions will find answers in her book. “That’s why it was a joy for me to write,” Fonda says. “If I had this book, it would have made things a lot easier for me.”

For more of the interview with Jane Fonda, including exclusive photos from her childhood, pick up the March 31 issue of PEOPLE, on newsstands March 19