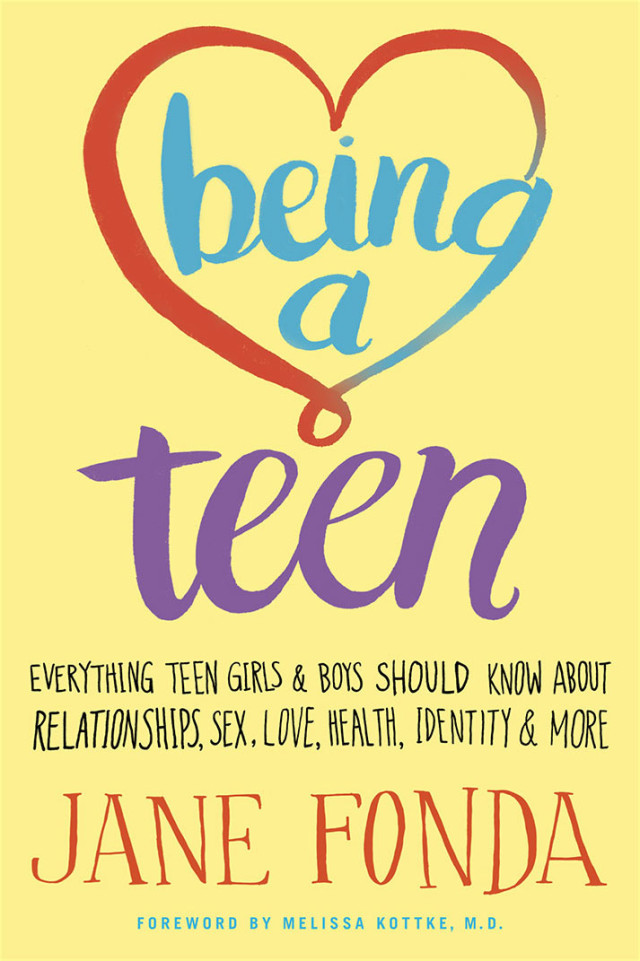 My new book, “Being A Teen: Everything Teen Girls & Boys Should Know About Relationships, Sex, Love, Health, Identity & More,” is officially coming out Tomorrow! Though people are already buying it, via Amazon etc. I’ve been doing lots of interviews and the response is thrilling for me. Obviously it’s adults I’m talking to but they’ve read the book and say they’ve learned things even they didn’t know and, those who have teens, have told me they want their child to read it. Heartwarming words!

I’ve been working with teens around issues of sexuality, self-esteem and relationships for several decades. I began to notice what teenagers wanted and needed from adults in the 1970s & ‘80s when my then-husband, Tom Hayden, and I ran the Laurel Springs Performing Arts Children’s Camp north of Santa Barbara, CA. I got far more deeply into it when I moved to Georgia after marrying Ted Turner and founded several organizations dealing with adolescence. I have a passion for this work, partly because, when I was a teen, I was very confused, not particularly happy, awkward about negotiating relationships with boys and didn’t know where to go for answers.

I wrote the book because I was asked many times over questions like (from girls) “how do I know if I’m in a real relationship?” and “how can I say ‘no’ and still be popular?” and “when is it okay to have sex?” I would see boys so confused and sad because they felt they treated girls well and were their best friends but couldn’t seem to get them to be their girlfriends. So many young people my non-profits work with don’t understand enough about how their bodies work, don’t know enough about ways to prevent getting pregnant or getting someone else pregnant, or how to avoid getting HIV/AIDS and other sexually transmitted infections (STIs)., think that oral sex isn’t really sex and can’t give them an STI. Wrong!

There is so much misinformation about these things floating around that I felt that the health of these teens–their future happiness even–was on the line. I wanted to write about it so I could help not just the young people I met in Georgia, but teens across the country who needed more access to information.

Here are a few excerpts from the book:

YOU NEED TO KNOW & TRUST YOUR INTIMATE PARTNER

You can’t trust your partner if you can’t communicate honestly. Ideally, any amount of physical intimacy should be matched with an equal amount of emotional intimacy. When you know and trust someone, you are much more likely to have safe and satisfying sexual experiences with them. If you do not know someone well, any type of sexual experience with them could be risky – both physically and emotionally.

WHEN IS IT NOT A HEALTHY RELATIONSHIP?

It is not a healthy relationship if there is abuse or pressure of any kind. You should not allow disrespectful language,subtle pressure or deception in an intimate relationship. It should go without saying that anyone who puts you down, uses violence against you or tries to force you into sex is an unhealthy partner. You should never tolerate any form of physical, verbal, emotional or sexual abuse in what issupposed to be a loving relationship. It is also wrong for your partner to threaten to hurt him or herself as a way to pressure you to do things you may not want to do. Even if your partner eventually apologizes for this behavior, it is still destructive and should not be tolerated. Be wary of partners who are obsessively jealous and paranoid,always suspicious and accusing, even if all you’re doing is only talking to someone else. Don’t stay in an abusive relationship thinking you can change your partner! It never works.

THINKING ABOUT WHO YOU ARE: YOUR IDENTITY

Maybe you’ve begun to examine the values and beliefs that you’ve been brought up with. You are starting to think more for yourself and, as you continue to learn and grow over the years, you’ll notice that things you feel sure of today may change many times.

During your teenage years is the time when your identity is being developed—who you are as a person, on your own, separate from your parents and friends. Because you are just getting to know who youare, it’s easy to be influenced by what others think of you– classmates, teachers, coaches. It’s a good time to appreciate who you really are instead of what others want you to be. Think about the ways that you are different from your friends and family and the ways you are the same. Try writing them down. Sometimes, when you write things down, it’s easier to think about them, analyze them and feel sure of opinions.

What kind of person are you, or do you are want to be. Do any of these words come to mind: Kind, considerate, generous, honest, loving, funny, smart? I didn’t ask what you wanted to do in your life, rather my question is about your being—how you’d like to be in the world. Write down the things you’d like to be and from time to time think about whether or not your actions, the friends you choose and the things you do are contributing to your becoming this person you’d like to be.

Never send a nude or partly nude photo or video of yourself or any sexual text to anyone! You may think it will remain between you and a current friend but someone who you think is your girl friend or boyfriend may get mad at you or want to brag about you, and send it to others and it can go viral. It can ruin your reputation and embarrass you or make you seem really stupid. The photo can live forever on cellphones and even on social networking sites. The police may be called in and there could be serious consequences. It could result in you having to move from where you and yourfamily live, and even then, the damage may follow if people recognize you.

Sexting may be going on all around you inmusic videos and elsewhere, but don’t be foolish enough to engage in it yourself. Respect yourself and be smart. Remember, you can never take it back, or control who sees it. It will be out there forever.

At the end of each chapter I give information about organizations & resources where you can get help, advice and/or more information. And by the way, all profits from “Being A Teen” goes to GCAPP.