Last night Richard and I went to a party co-hosted by Jennifer Lopez and Mick Jagger. Lots of friends were there, including my brother, and it was fun. I just couldn’t take pictures of everyone…Geoffrey Rush, Eddie Olmos, Bobby Carradine (was in “Coming Home” with me), Renee Zellweger, Geena Davis, and a host of others. I walked up to Mick Jagger and reminded him that the last time we saw each other was in the house outside Rome on the Appia Antica, that my then husband, French director, Roger Vadim and I lived in during the filming of “Barbarella.” Mick and Keith Richards were around because Keith’s girlfriend, Anita Pallenberg, played the Black Queen, in Barbarella. 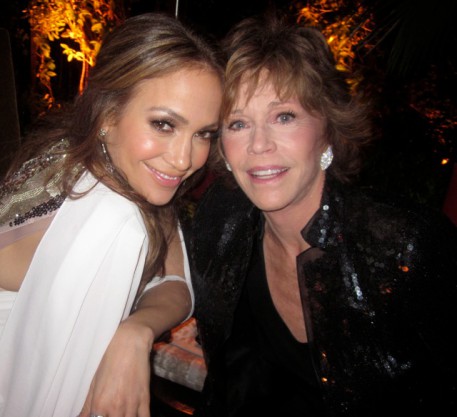 I had an opportunity to tell Jennifer how incredible I thought she was in the film she did several years ago with her husband, Mark Anthony, “El cantante.” I missed it when it came out but Richard and I watched it the other night. She is as fine as I’ve ever seen her. Her considerable acting talent in full force as a tough, sexy (gorgeous) Puerto Rican woman , the partner of the Puerto Rican singing idol, Héctor Lavoe, played well by Mark Anthony. She blew my mind in the role. If I was still producing, I’d find a project for her with a role that allowed her to play this sort of character. Oh yes, and the subject of “American Idol” came up as well! 🙂 I think she is good in it. 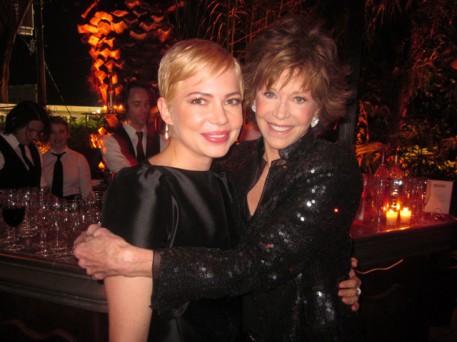 I also got another chance to tell Michelle Williams, again, how fantastic she is as an actor. Always, but especially in Blue Valentine.

Tonight is the last preview before tomorrow’s opening. I am not nervous. More excited than anything. Cher is coming, and Lindsey Lohan, Colin Farrell, Angelica Huston, Chelsea Handler, Rosanna Arquette, Carla Gugino, Christian Slater, Peter Fonda, John Glover, Ben Vereen and many other friends and family.

Throw out a little “Break a Leg” for me. Thanks!