Well, first 2 show day in two years and I am 2 years older, so we’ll see how it goes. The matinee went really well. A very appreciative audience. I am pleased that word of mouth is good and that ticket sales are robust– good word, “robust”!

I will now try to sleep for a couple of hours till it’s time for tonight’s show. I have friends coming tonight…my wonderful hair stylist, Matthew Shields and his also wonderful partner, Alfonso. Also coming are 3 couples with whom I was very close in the ’70 s and ’80s. I will take photos of them all tonight to go with this blog. 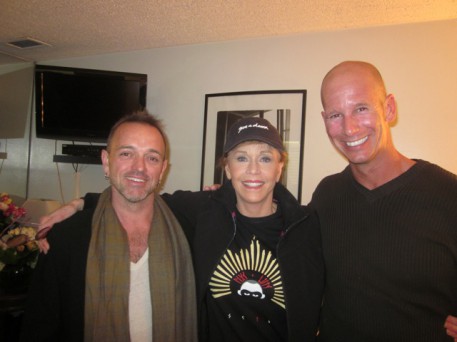 The other day, Marlo Thomas told me that if you grew up in LA, doing a play here is like old home week– people one hasn’t seen since kindergarten know where you are and come to see. For the most part, this is good. I am excited about seeing my friends tonight.

Bill Zimmerman and his wife, Joan Anderson, lived right next door to my family and me in Ocean Park during the Vietnam War. They were part of the anti war work we did then. Jack Nichol and his wife, Carol Kurtz, lived with my husband, Tom Hayden, and me and our children in the house on Wadsworth Ave that my father called the shack! Well, maybe it was a shack then ( i bought it for $40,000. The area was redlined back then, meaning no bank would invest in its development. All there was were bars, laundromats and thrift shops back then. I remember once all my clothes were stolen from the washing machine in the laundromat when I went to grab a cup of coffee. ( we did not have a washer/ dryer or dishwasher back then.) The whole area has been, totally gentrified since. That house of ours sold recently for almost $3 million. Those were challenging, scary years and Carol, in particular, was a stalwart support for me. I have written about them in my memoir. 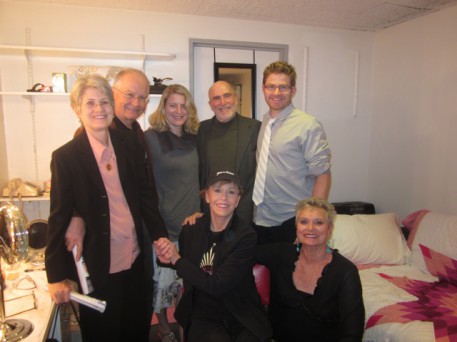 Here we all are. With Carol and Jack is one of their sons, Jesse, and his fiancé. Bill has written a book, “Troublemaker,” that will be published in April by Doubleday. He says it will chronicle his emergence as an anti war activist and the many historic and unusual things he experienced (and some of us with him) during those tumultuous years, it” s so interesting seeing people you have shared so much with in times gone by– deep and complicated things– and then seeing them decades later– still together, looking very much the same. I could send weeks catching up. But I have an early show tomorrow so there was little time.

Tomorrow being Super Bowl Sunday, we have but one show.