I haven’t been blogging because I’ve been so busy moving to an apartment in Los Angeles. I only have a few days before I leave for Paris to start the French film, “…Et Si On Vivait Tous Ensemble” (“..and if we all lived together”). And only a week after I get there before I begin shooting. Whew! I feel betwix’t and between….not really out of Atlanta, not really here…like I’m in a dream. I like my new digs. Very small but it’ll do. Careful shopping at The Container in Atlanta and Bed Bath and Beyond out here have enabled me to put lots of stuff into small places. Much of the furniture I am surrounded by here are pieces I had at my home in Santa Monica 20 years ago, then they moved to the penthouse I shared with Ted on the top of the CNN center in Atlanta then they moved to my office, then to storage. They’ve been waiting for a nice new home.  I have a high up view onto the Hollywood Hills to the north. It’s Peaceful and looks a little like the coastal hills of Portofino.   On another note, a pair of Mallard ducks have take up residence in Richard’s pool. Richard doesn’t know about ducks and thought the showy one with shiny green neck with white stripe was the female. Wrong: in the bird world, it’s the males who have bright plumage, not the females who are sort of earthen colors better to be camouflaged while they sit on their eggs. They wouldn’t want to attract attention/danger from predators. Maybe the couple will have a brood/gaggle/flock…not sure what the right word is for a Duck family. I bet one of you tells me. At my friend’s Paula’s pool, I once saw a mama duck with 7 ducklings. Very cool.   In fact, Paula’s about to arrive with her daughter, Hannah, my goddaughter, to see the apartment and go to dinner. Troy and Simone are supposed to come too but I haven’t heard from them. Rats!! Zzzzzxxx 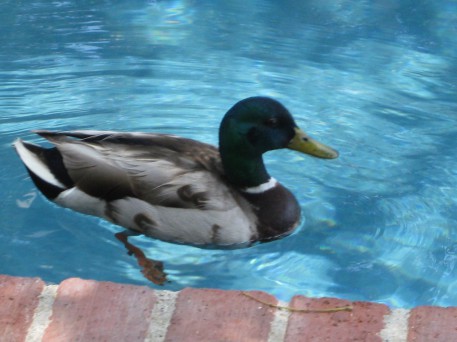 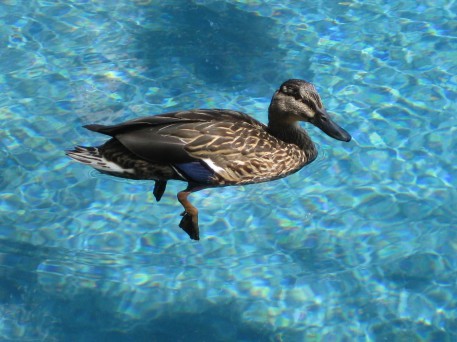