It was a really good party from all reports. Two reasons, I think: There were many but not too many people and they had the time and room to really talk. Also, it was a mixture of Richard’s friends and mine, so there was more diversity than usual—at least that’s what a number of people told us the next day. “Blended rolodexes,” is how one friend put it. That sounds like a line from “Up In The Air.” There were people who hadn’t seen each other in a long time. Ok so I’ll name drop: My old pal, Warren Beatty, was there as was Sean Penn, Al Pacino, Hugh Grant, Quincy Jones, Robbie Robertson, Frankie Valli (on whom “Jersey Boys” was based), Kevin Spacey among others, Sean had a brilliant idea and invited his friend, Mickey Avalon, to come up with his girlfriend, whose name I didn’t catch. 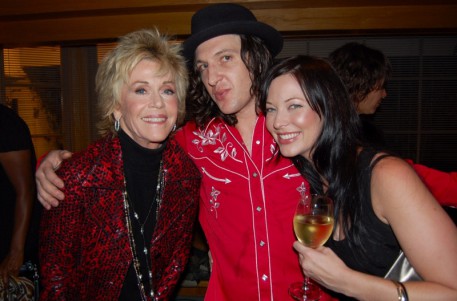 Me with Mickey Avalon and his girlfriend

Richard had Mickey’s “Do The Jane Fonda” song on one of his compilations so he put it on, Mickey sang to it and I danced. It was pretty cool and soon everyone was doing the Jane Fonda. It makes me feel young and hip to have a song with my name in the title. It was very gratifying because everyone—young and old, from the right and the left—seemed to have a good time.

Happy New Year and See you next time.