It has been hard to blog since the 20th, after Bridget and Danny’s party. Getting ready for the arrival of my non-L.A-based family, finishing with presents, wrapping, sending, checking the list thrice and all the while working to remain calm and centered as I watch my partner (Richard) doing the opposite—that is to say, waiting until the last minute to shop, scrambling to have someone else wrap at the last minute, putting together what turned out to be a sensational compilation of Christmas songs.

On the 21st, my winter solstice birthday, I received many moving calls, cards and wishes including on my blog and Facebook. The kids came over for awhile, Richard surprised me with a lovely green marzipan cake, I blew all the candles out (there were only 7 instead of 72 but I bet I could have blown all 72 out as well) Actually, I think I already posted photos of that celebration.

I forgot to write about the Christmas tree, You gotta understand, I am a Xmas tree nut case….In New Mexico we have a 14 foot tree (plastic cause Vanessa insisted and, you know what, it works anyway) and 100s of decorations that have become my friends over the years. Amazing decorations. I think the importance I place on the tree and its décor is because my father did. He wasn’t an ebullient man but at Christmas time, when it came to the tree, he poured his heart and soul into it. Richard, on the other hand, hasn’t celebrated Christmas with a tree for something like 19 years..no tree, no garlands, much less kids and grands gathering. So we went out to pick a tree. He came with me. NO MAN HAS EVER COME WITH ME TO PICK A TREE! I picked one and then he found a better one…the one we bought. We had shopped in Santa Fe for ornaments (There are 2 Xmas Shops there that are open all year and have the best stuff). We found there the most unique twinkling lights with seven different twinkling patterns, We discovered lots of musical instrument ornaments, horns, trumpets, piano, guitar, flutes, oboe, a jukebox, piano, Elvis and a base drum with “Rock On!” written on it. Little did I know this would become the theme of our Xmas tree.

Then, back in L.A. when we got the tree, we also found collector handmade 45 single records from the 50s and 60s made into ornaments and even more instruments. We got home and put up the tree, got the lights on including my special (brought from Santa Fe) heart lights. They are about 2 inches across, bright red and are the best accent ever. They make a real difference mixed in with the small white and other color lights. Richard then asked me to remove all the price tags from the newly bought decorations while HE HUNG THE MUSICAL ONES. When I called Simone to tell her what was happening she said she couldn’t believe that I had relegated the hanging to Richard. I’m the one who uses a laser beam every year to direct my main Xmas helper, Tommy, perched way up on a tall ladder to move a particular ball 2 inches one way or another. It takes at least a full day and a half to finished my trees…along with wine and mellow jazz. That’s Tommy and my annual drill. So this year I’m taking price tags off and Richard’s doing the hanging!! He was working on his music theme, hanging the 45s and various instruments just so in relation to Elvis, the “Rock On” base drum and the hip Santa with Ray bans on a motorcycle. When he’d finished and I looked up from my manual labors, I saw that he had created the theme all right, but it was all clumped at the center of the front of the tree and everywhere else was mostly bare. “Richard,” I said, “You can’t leave it like that. Your theme is fabulous but there needs to be decorations all over the tree. Look at all the empty areas!.” “No, this is fine,” he replied. BUT, knowing we wanted it to be a copacetic tree trimming event, he let me decorate all the tree. I even bought more very special balls and when I had finished he said he thought it was the most beautiful Xmas tree he had even seen…”By our powers combined!” said he and it was true. We did it together and although there were times when we were each outside our comfort zone we made it work. Ben McCarthy, Richard’s assistant, who has lived here for 18 years but worked with him for 22 or so, said it was the best Christmas he’d ever had.

On the 23rd, we had a party (photo in a separate post) that morphed from what I had suggested be an intimate gathering of family and closest of friends—singing Christmas carols—that sort of thing, Into something MUCH BIGGER, but that’s for another blog. I am one who plans in advance and has everything worked out down to the last detail. Not Richard. So for me, the days leading up to the party meant trying to manage my stress level, not get mad or impatient and trust that Richard knew what he was doing. …He did.

The party day, the 23rd, Lulu ad Nathalie arrived, Lulu from Tucson and Nathalie from my ranch –so the entire extended family was here.

Xmas eve we all went out to a great pizza place together with Tom (Hayden, my ex) and his fabulous wife, Barbara Williams and their son, Liam, who is Malcolm and Viva’s age and they all get along great…as long as we don’t try too hard to define who is a brother as opposed to an uncle.

Xmas day Vanessa and the grandkids, Lulu, Nathalie all came over to Richard’s to open presents and then, as evening drew nigh, we went to Troy and Simone’s home where they cooked their first Xmas dinner—for 21 people. Besides all my immediates, there were Shirlee Fonda (my stepmother) her partner Rob Wolders, Bridget, Oliver and Danny, Troy’s father, Tom Hayden, his wife Barbara and their son Liam, Richard’s roommate at University of Michigan, Joe Allen and his wife Annette Tapert Allen and her son, Nick, Paula Weinstein and Hannah. Troy and Simone turned their yard into a magical kingdom with hanging fairy lights and ornaments and they put couches outside (and many heaters) and it was a grand and historic event. It was Troy’s first tree, in their own house. To top things off, Troy made 3 kinds of ice cream…Vanilla, peppermint and apricot and, I tell you, all three were to die for. He reminds me so much of my father who also loved to make ice cream. 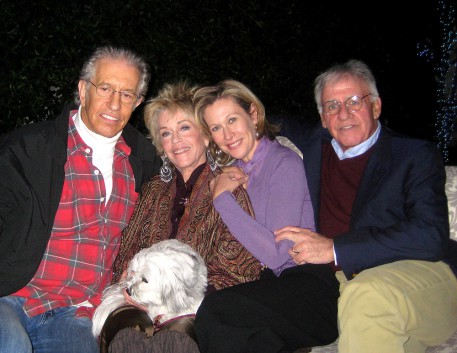 Richard, Me, Tulea with Richard's roommate at University of Michigan Joe Allen and his wife Annette Tapert Allen 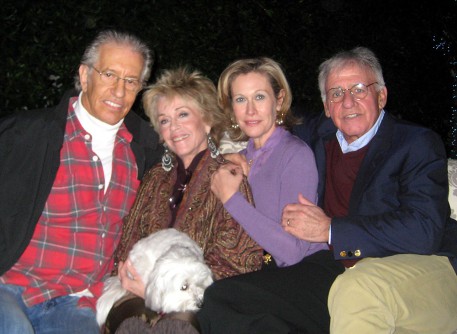 So, now I will write about our party.