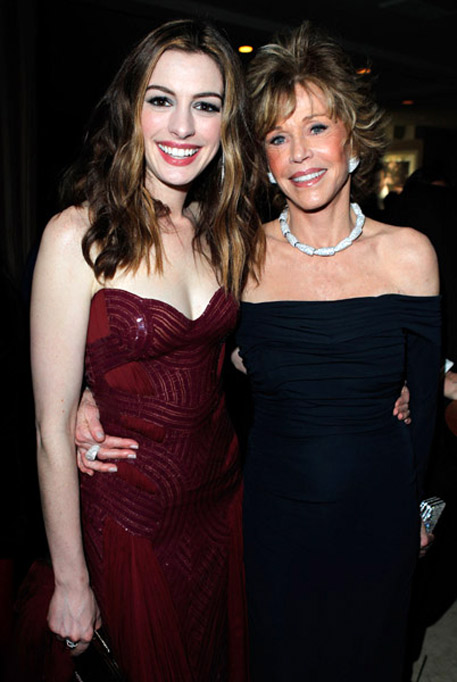 I was doing my second show during the Oscars, but Richard sat in my dressing room and watched there. I was able to catch a glimpse whenever I came in for a scene/wardrobe change. I thought Anne Hathaway did a wonderful job. What a talent! And she sings too. Wow! There were no surprises, really, when it came to the winners. I got into a Badgley Mischka navy blue gown with great Vhernier jewelry and Matthew Shields came to fix my hair which gets all flat from being under a wig for 3 hours ( 8 hours yesterday as we did 2 shows) and off we went to the Vanity Fair Party and then Madonna and Demi Moore’s party. Had a lot of fun and spent time with people I like and admire..Anne Hathaway, Quentin Tarantino, Jane Lynch, Reese Witherspoon (who I‘ve wanted to meet for ages!) and many others. My brother Peter was there as were Troy and Simone.

Got to have a nice reunion with Rob Lowe at the second party. Hadn’t seen him in almost 30 years! We worked together on some important environmental campaigns back in the 80s. I stayed up way too late, though and have lost my voice. Nonetheless, I am about to go to a function in Malibu on behalf of the Centre Theatre Group where Artistic director, Michael Ritchie and I will have a “dialogue.” Then straight home to bed with lots of tea and honey. If it’s not better tomorrow, I’ll probably have to have a cortisone shot in my butt which is how I got over the same thing 2 years ago on Broadway.