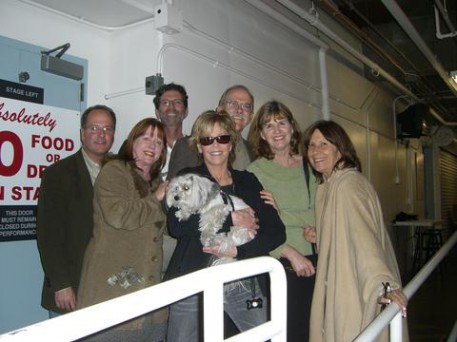 It’s challenging to do two two-show days back to back. In New York we have 2 shows on Saturday and Wednesday but the Ahmanson is way downtown and I imagine it’s hard for people to get here mid-week for a matinee.

Sleep between shows is what saves me. Thank goodness I am able to do that…put in ear plugs, curl up with Tulea under a cozy blanket that I was given as a gift for doing The Talk.

The opening went well and reviews are good and we’re relieved that it’s over and we can relax into the show. Moises has gone to New York to begin rehearsing “Bengal Tiger in the Baghdad Zoo” with Robin Williams. I will get to see it in April. I was a little jealous and feeling bereft when he (Moises) left but I’ll get over it. Still, I wish he was here cause I have a few new ideas that I want to show him.

It’s a little like old home week these days- many old friends coming to see the show. Tonight, David Zeiger will be here. I met him in 1971 at a GI coffeehouse in Kileen Texas near Fort Hood. He made a terrific documentary about the GI Movement during the Vietnam War, “Sir, No Sir!”

I just learned that Mark Rydell, the director who directed “On Golden Pond“, is also in the audience. And friends John Taylor, bass guitarist with Duran Duran ( named after the evil scientist in “Barbarella”) is here tonight with his wife, Gela, founder of Juicy Couture. I will have to race out of the theatre to try and make a brief visit to the pre-Grammy party given every year by Clive Davis so I may not have a chance to visit with these friends. I’ll only stay a few minutes, though, cause tomorrow our matinee is an hour earlier, at 1pm so I’ll need to get to bed as soon as I can. The next 2 days are going to be really hard but I will talk about that tomorrow. I’m writing this during a short break and I have to get ready to go back on stage.