Our stage manager, Linda Marvel, was in my dressing room yesterday giving me some notes about pacing. She said that as a show enters its last weeks, there is a tendancy for actors to linger, savor, collagenize the moments. Gotta watch out for that.

What I have been noticing, and appreciating, is how Erik Steele, who plays Shindler, Beethoven’s assistant, is exploring new line readings. I enjoy watching him from the wings, too, because of the meticulous stage business he does–like the way he brushes lint off Beethoven’s overcoat and then dusts off his hands as he moves swiftly from upstage to his master’s side. Actually, I could go character by character and describe the details that I enjoy watching. We are often all on stage together–the past and the present, each freezing in place when it’s time for the others to take up their scene, so it is easy to hear all the nuances in their changes of delivery.

Then there are the stage gremlins that appear out of nowhere. In the first scene, I introduce Don Amendolia’s character, Diabelli, the man who wrote the original waltz on which Beethoven bases his 33 variations. Like all the characters from the past, I conjure him up, so there is no actual interaction between us (except when I hallucinate on morphine and Beethoven appears in my hospital room near the end and we have a good old time talking together). So, anyway, the other night, right at the top, Don comes out as Diabelli, the most famous music publisher of the day, and extends his invitation to the composers in Vienna to write one variation on the waltz he has just written and we hear his rather clumsy waltz played for the first time. I then say to the audience, “He was a …..” I was supposed to say, “he was a great music publisher. Not so great a composer.” But, oops, I forgot my line and ended up turning to him and saying, “what is it you do, anyway?— Oh yes, you sell music.” We had a good laugh about it between scenes. “I’m a figment of your imagination,” Don reminded me, ” so I couldn’t help you out there and remind you what I did.” I asked him if he thought the audience knew and he said “no,” but then, Don is always the most positive person I have ever known–and one of the most talented. Now, every night he whispers “I’m a great music publisher,” while we’re waiting to enter.

It is so weird how we can know our lines in our sleep and yet there are times when we go completely blank. It is terrifying, I can tell you. I start off both acts one and two with a monologue and it has happened that in both acts, I have gotten out there, opened my mouth, and totally forgotten what I am supposed to say. It feels like an eternity. Afterwards, the other actors say “not so, they probably didn’t notice,” but I now repeat my opening line many times right before the act begins.

Sometimes we can find our tongues deciding to get stuck somewhere between our teeth and our throats as we begin a major speech. Who knows why, but it becomes hard to get a word out. It has happened to most of us at one time or another. Sometimes we will choke on our own saliva. Sometimes we fart as we say something emphatic (the noise kind, not the lethal kind which would be really terrible cause there’s no dog to blame it on) and then wonder if the front row heard, not to mention our fellow actors. Sometimes we say our line before the other actor has finished her/his line. Well, maybe I’m the only one who does this–i mean.

Then there are the times when one finds oneself saying words the author never wrote. You’re making the same point–more or less– but in your own way, and you know it’s happening and you listen to yourself and ask yourself why this is happening and have no good answer. Moises has been in the audience a few times when this has happened to me and I have apologized. He’s never seemed too upset and I think it’s because he knows I know the lines and that the wierd stage gremlin that afflicts actors sometimes has gotten the better of me on that particular day.
Mind you, the gremlin only appears maybe once a week (though I have only heard it happen to Don and Susan once in four months).

I am en route to Montreal for a speech and I’ve brought with me all my videos of people with ALS to watch during the waiting time. I feel the need to refresh myself. I fear I am laboring the speech too much in the later scenes and have lost the unique nasal quality.

Michael Rudd is taking Tulea to the beach while I’m here in Canada. Wait till he sees how she gets when she’s in the sand! She races at breakneck speed, emitting a low growl (trying to appear ferocious, perhaps), turns on a dime and flattens herself in the sand only to do it all over again. Then she digs like she’s headed for China. Can’t wait to hear his tales.

Wish me luck tonight. And see you next time. 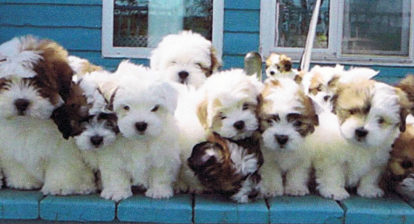