Boy did we have fun last night! I didn’t know that so many folks from the cast and crew would come to Sardi’s for the unveiling of my portrait. As you may know (or not) the walls of Sardi’s are covered with portraits of Broadway actors. Nowadays they are portraits. In former times, they were caricatures. View the difference between my portrait and my father’s caricature.

The owner of Sardi’s, Max Klimavicius, threw a fabulous party for us. I was intending to go home early–after all I was up at 6am yesterday to leave Montreal. But I couldn’t tear myself away. It’s not often that all of us get a chance to chill and share stories.

My dear friend, Robert Osborne, who hosts the Turner Classic Movie channel was there looking dashing. He has lost a good bit of weight and it really becomes him. 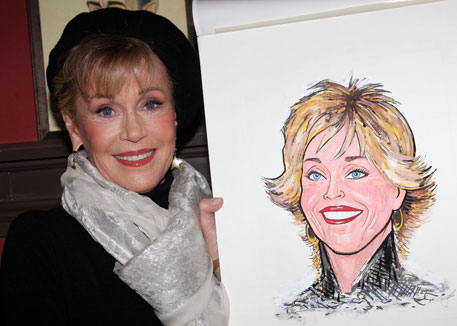 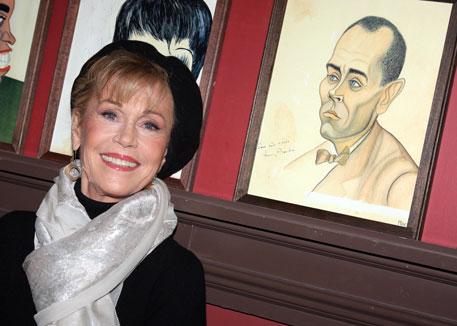 Standing in Sardi’s next to Dad’s caricature (photo: Bruce Glikas) 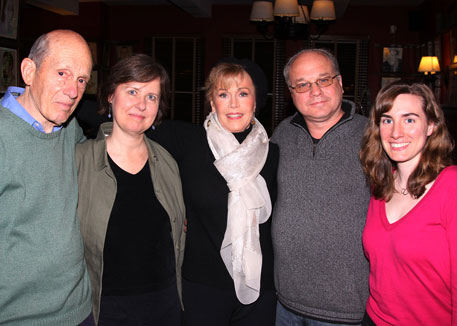 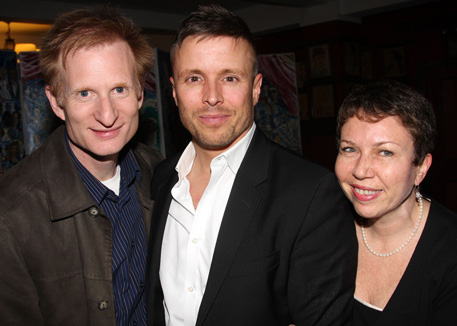 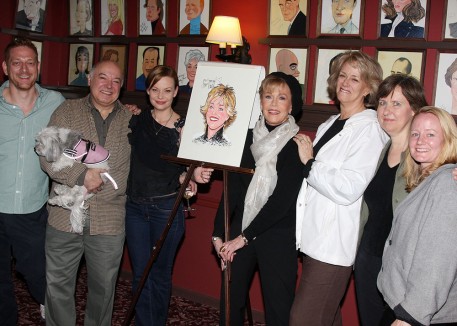 Our Producer, David Binder, Don Amendolia with Tulea, Samantha Mathis, Me, Susan Kellerman, Diane Walsh our pianist, and Linda Marvel, our stage manager on either side of my newly inaugurated portrait. (click photo to enlarge. Photo: Bruce Glikas) 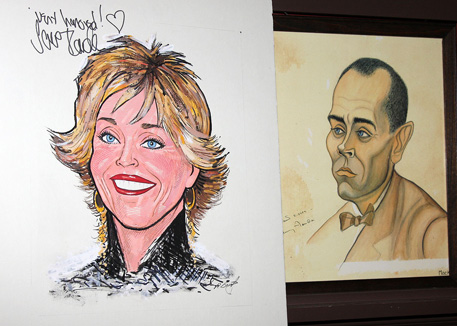 My portrait and my dad’s. Hmm. Guess I am happier (Photo: Bruce Glikas) 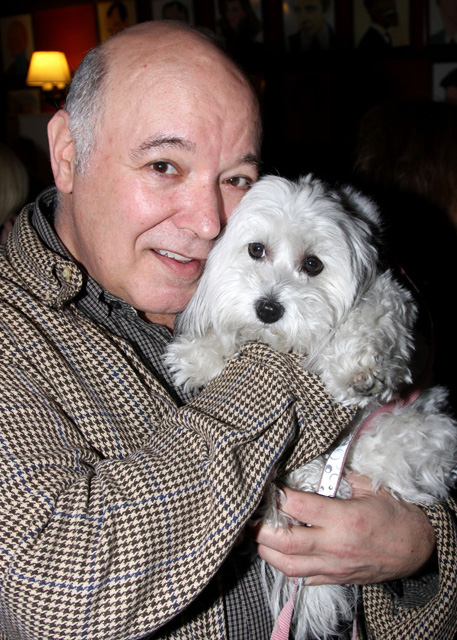 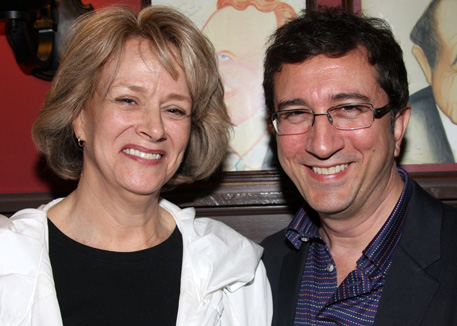 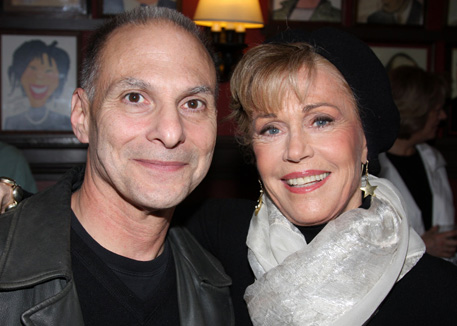 With Dr. Barry Kohn. He’s is the doctor who treats actors pro bono whom I have blogged about in the past. (Photo: Bruce Glikas) 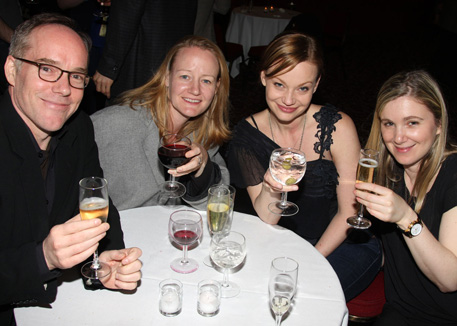 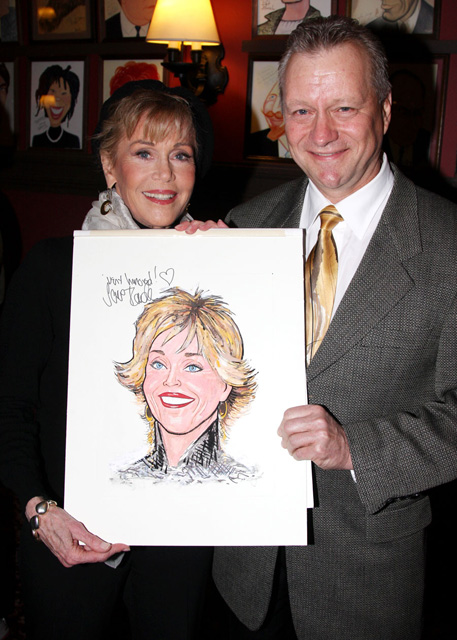 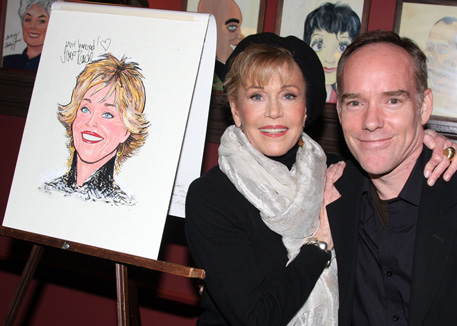 With Michael Winther. He, by the way, is responsible for “33 Variations” winning the Broadway Cares skit and is about the nicest person one could ever meet. Played one of the husbands in “Mama Mia,” fantastic singer. His new CD is “Song’s From An Unmade Bed.” Right now he is understudying Beethoven and Diabelli. (Photo: Bruce Glikas)

We had a good matinee today. Tonight my beloved friend and Zen teacher, Roshi Joan Halifax is coming. I’ve been waiting for this since the beginning. For me, this play is very Zen. Besides, one of the things Joan focuses her attention on (and her writing and teaching) is death and dying. She spends much time with the dying and I have learned a lot about this from her. One of my bloggers asked if in my next book on aging I intend to also focus on death and she sent me some suggested reading. I have read what she recommended and much more and, you bet, I intend to focus on death. I do not like the way we in the United States tend to avoid any discussion of death. We seem to want to deny our mortality or at least not be reminded of it. All cultures are not like this. I think, especially, of Mexico where they seem to include the presence of death even in their festivals. I think our denial robs us of living a meaningful life. Just as noise gives meaning to silence and sadness gives meaning to happiness, so death gives meaning to life. I try to stare death in the face, make it my friend and ally. I envision my dying–sort of like rehearsing for it. I want to be intentional about my dying just as I try to be intentional about my living. The dead and the living are woven together in this play and, for me, the final minuet says to me that no one really dies. We live on in other’s hearts and prayers and imaginations. Just as the cells that make up our bodies are composed of cells that have existed for eons, part of the stars, so, for me, we maintain a presence after our death–an energetic, cellular presence. Moises has called this up in this play and it speaks deeply to me just as, I think, it will to Joan. 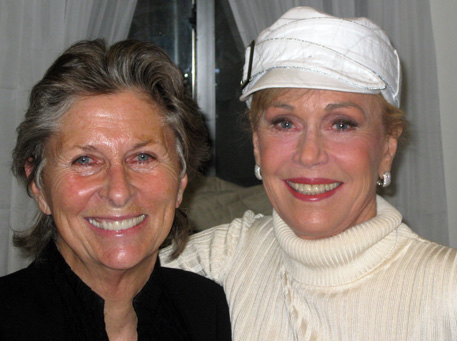 After the play, Joan and I and another friend of hers will go to dinner. We have a lot of catching up to do. I will dedicate my performance tonight to her.

Now for my between-shows nap.