I have been packing up my books and files and then came to the dressroom and packed up what I won’t be needing between now and Thursday. Tulea knows something’s up and is worried. I can tell. People with dogs will know what I’m talking about.

Now, half hour was just announced for our 3pm show and I am sitting alone in the room and feeling sad. In fact, if it would not ruin my makeup and put me in the wrong frame of mind to start the show I would let myself go and cry. I can hear Diane practicing–warming up–with various variations and I realize that from now on, when I listen to her CD I will cry. Every variation is so bound up with the emotions of the play.

It’s intermission and 2 dozen Montreal bagels were just delivered to me–a gift from Debbie Giser!!!! Some are poppy seeds, some are sesame seeds. Yum!!!! Thank you Debbie.

Marlo Thomas is in the audience today. I look forward to seeing her. It will be hectic backstage tonight cause I have to get my hair fixed and change makeup and then walk the red carpet for the Drama Desk Awards evening. I am presenting the award to the best featured actor.

Right now it’s during my long break between scenes. I have to say this has been a wierd performance. From the beginning. Can’t explain it. I feel wired, aggressive. I’ve been more hostile with clara, my daughter in the play, than I usually am. Top of the second act I got words all mixed up. Sentences reversed.

Pat, one of the stage managers, heard me say I felt strange and she said the whole crew was acting wierd, on edge. “This always happens when you get close to the end of the play. Separation anxiety,”
Pat said.

Marlo Thomas did not come backstage so, naturally, I assume she didn’t like the play or my performance and didn’t want to be embarassed. There have been time when I have seen a show and not gone back stage unless I’d been specifically asked. Now I know never to do that again because it causes paranoia.

But Debi Karolewski came back. Debi was my assistant for many years when I lived in California and had a production company. The job only ended because I married Ted and moved to Atlanta. She has remained in touch and close to the whole family. 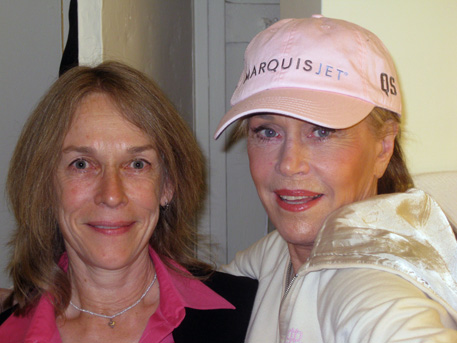