So glad we have 2 shows (did I already say that earlier?) It means I don’t have to think about what to do.

Robin Laughlin saw the show at matinee and came backstage. She has supposed to come for the opening but got sick. I’ve known Robin for a long time. My step daughter, Nathalie, introduced us years ago when I was looking for a place to move to since I had decided to quite the movie business and become a fulltime activist. Nathalie suggested Santa Fe and I said, “But can you introduce me one person who could be a close friend? I am too old to make all new friends.” Robin was who she introduced me to. She’s my only woman friends who can out-fish and out-hunt me. She reminded me of the days when I would tell her, despite her protestations, that I would never act again. “But then came ‘Monster-in-Law,’ and then ‘Georgia Rule,'” Robin said, “And now this! I am so happy and excited to see you performing up there on the stage.” There’s so much else I could say about Robin but gotta get ready for curtain time. She’s one person I feel close enough to to actually ask her to tell me what moments she was most moved by. OH! I almost forgot to tell you this about Robin: There is a scene in the first act where I am supposed to take my shirt off and be topless. I didn’t think this was right for me to do and I discussed it with Robin during the Christmas holiday. “You should get one of those transparent camisole tops,” she said.”That way you are partly revealed but there’s still something between you and the audience.” She actually bought me a bunch of them and Moises, when he saw the effect, gave me a thumbs up. “It’s more about vulnerability than nudity,” he said. That’s what he’s got thanks to Robin. 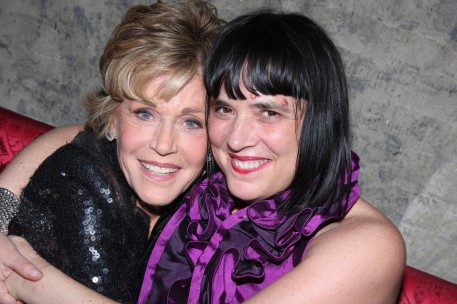 Jane Fonda and Eve Ensler attend the after party for opening night of "33 Variations" at Buddakan on March 9, 2009 in New York City. (Photo by Bruce Glikas/FilmMagic) 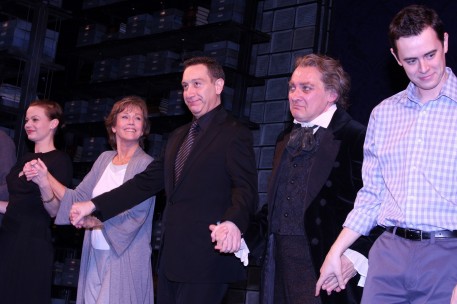 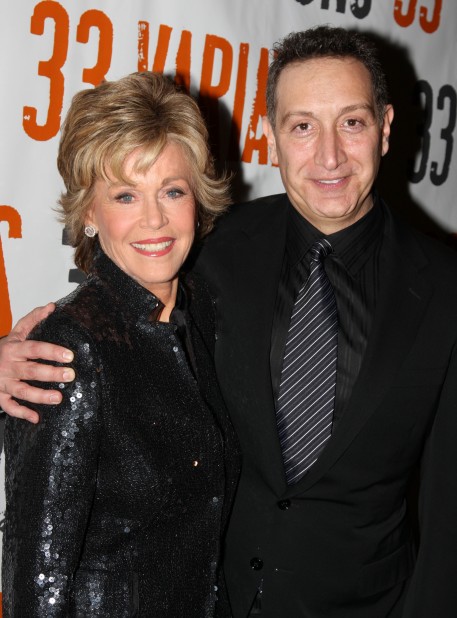 By the way, last night Troy, Simone and I went to the opening of Colin’s new film “The Great Buck Howard,” also starring an amazing John Malkovich as Buck Howard. A very sweet, touching film that has been Colin’s baby since he took it to Sundance.

More later for Today’s blog. Feeling rested and great. Anxious to get to the theatre for the first of our two shows. Bob Redford is coming back after this evening’s show. Much excitement…especially for me.

Life is good. Later, I’ll tell you about a new goal in my life—thanks to an invitation from Joan Hallifax Roshi yesterday.

It was a really good show though I have to confess I kept thinking throughout “does Bob (Redford) like classical music? Will he like this? I sort of figured he would cause he’s black Irish so issues of life and death and such resonate. Also, the play actually workshopped at Sundance. Moises was on the board.

So Bob came back after. I won’t have photos till tomorrow but, gotta tell you, he looked fantastic!!! Really good. And his daughter Amy was with him. She did a play with my son awhile back. We had a good talk. And hugged a lot. And it was so important for me–seeing him and telling him what it feels like–now–to be doing this play. We have so much shared history. He told me he was proud of me. I could tell he meant it and that meant so much.
Tom Hanks came again and I will have that photo with him tomorrow too.

Then Kristina Kiehl and her sister-in-law came backstage as did documentary filmmaker (oscar winner) Barbara Kopple and we polished off some good red wine and hung out till the doorman said he was about to lock up. Hey, after opening night and a two-show day, I needed to unwind with friends.

Tomorrow I start up with Pilates again after 2 weeks. I know I will be sore. I want to be sore. It’s been too long. But there was no time. Now I am back with a regular schedule again.