OMG! I kid you not and I twittered about it earlier but, no kidding, during curtain call Tulea escaped from her (new) dog sitter and came out on stage. The timing was kinda terrific. I cannot image what it would have been like had she come out during a scene. It’s even possible that there were those in the audience who thought it was planned. But no! I had to scoop her up as I left the stage. Anyway, here’s what I wrote before the show started:

I was happy to get back to the theater and the cast for rehearsal today. I really missed everyone. Susan Kellerman (plays Gertie) isn’t feeling well so she went home to try and kick whatever it is and we spent much of the day rehearsing her scenes with Caitlin, the understudy for Susan and me. What a challenge it is to have to come on and play a role on such short notice but clearly, Caitlin has been paying attention and knows her lines.

Obama’s signing his stimulus package into law as I write. I prayed this morning that it will do what’s needed. Like many people, I wish he had just gone and asked for all that he really wanted (and what may well be what’s needed) rather than concede things to the Republicans (the tax cuts) when they didn’t support him anyway. I bet we won’t see that mistake again!

I’m glad we had the chance to run so many of the scenes (because of Caitlin because I noticed that with those 2 days off my brain is a little noodle-like. The body feels good but the mental alertness is lacking.

A friend from the days of my marriage to Ted Turner, Siobhan Darrow, is seeing the show tonight and will come backstage with her journalist husband, It was Siobhan who made Ted’s vision of The World Report into a reality and it was amazing. Any country in the world no matter how small could send in a national report that would be aired on CNN. The only requirement was that it be in English. There was an annual World Report Conference that brought the reporters from around the world to Atlanta to network, to learn more about TV journalism and how a large newsroom works. Many of them came from newly created democracies and had scant experience of what free press could be like.

So I am writing this now, after a few glasses of wine and I am back home after passing a wonderful hour with Siobhan and Shep in my dressing room. I felt bad about keeping Demitri, our stage door manager, there late but he says he has to stay till midnight anyway. So no harm done. 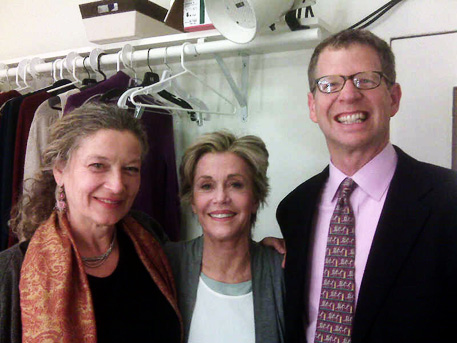 Siobhan and Shep backstage with me after the show. 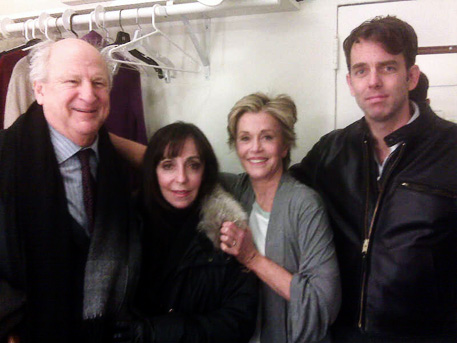 Backstage after the show with a dear friend from decades ago, Bobby Zarem, on the left; the famous and wonderful casting doyen, Bonnie Timmerman and screenwriter Scott Prendergast (“Kabluey”).

I wrote earlier that my brain was like a noodle after 2 days off. Well, what I feared (and twittered about) happened: I totally forgot some lines in the first act and riffed while all alone front/center stage but managed to give the right cue for Colin and Samatha to enter. Then I forgot my cue in the next scene with Samantha—that was weird. And again in a later scene with Colin and San (that’s what we call her), I got to thinking about not being able to move cause of my illness and forgot to react to a pain that Sam thinks she’s caused so Sam and Colin just kept going with the physical therapy they’re giving me. Sam later told me she could see Colin’s neck turning red as he panicked, till I finally realized the arm therapy had been going on for many minutes in silence and FINALLY jumped in with my line. I almost burst out laughing.

STILL… the very savvy people who came back stage said they found the play to be powerful, inspiring, moving, thought provoking. Moises brought some friends back and when I apologized to him about screwing up his lines he said, “If you keep rewriting my lines I’ll have to pay you royalties.” What a mensch Moises is. I so love working with him.

To sleep. And yet to dream.