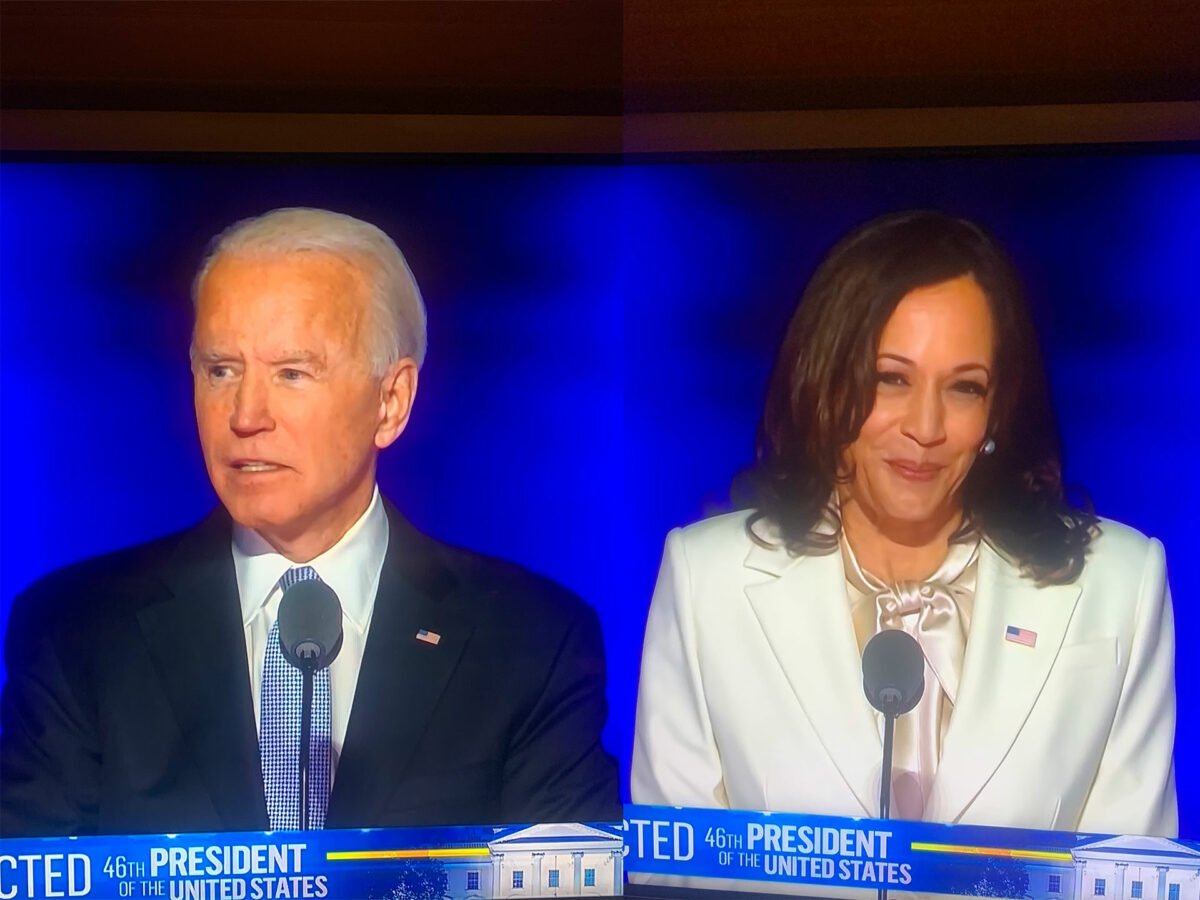 I took these pictures while they were making their victory speeches in Delaware Saturday night.

Whew! I was told not to believe the election night ‘red mirage.’ I knew that the voters who voted on election day were largely Trump supporters and that Biden supporters tended to vote by mail. I knew that. But living through election night was another thing entirely. OMG. BY 11pm pacific time I couldn’t eat or hardly move. I was in major PTSD trauma, 2016 flashback. I felt nauseous. That lasted until Friday. By the time I did my Fire Drill Friday virtual rally I was way better. Not 100%, I hadn’t slept well, but no longer nauseous.

The next morning, I was actually watching TV when the People decided and Biden was announced the winner and I burst into tears. I so loved watching all the celebrations around the country and the world. I so loved the faces of all black and brown women and girls shouting Kamala’s name and holding up posters of her. I’m sleeping well again now and my appetite has returned.

So, here are my thoughts now. Elections are really important. They are major milestones along the road of social change. But what matters almost as much, is what people do after elections to force the new elected leaders to do what they promised and more.

70 million Americans voted for Trump. If the Biden administration doesn’t make them feel seen, safe, more secure, then in 4 years, a more refined, less corrupt and clownish Trump-figure may run for office and win.

Yes, among those 70 million are staunch white supremacists who will never agree to a nation that respects and serves people of every race, ethnicity, sexual orientation and level of physical ability. We don’t need them. But among those millions are folks who have felt totally left out by the Democratic Party and they are right. They have been. There has not been a true effort to create good paying jobs that will help them regain their self-esteem and sense of security. That MUST happen and it won’t if we return to “normal.” Normal was the problem, even prioer to covid-19.

African Americans had a huge role in getting Biden/Harris elected. 91% of Black women voted for Biden/Harris. But if the Biden administration doesn’t start removing the laws and policies that maintain racism in this country, the black vote won’t be there anymore. They hoped it world happen during the Obama Administration and maybe it would have had not Mitch McConnell and the Senate not blocked everything Obama tried to do.

This is why winning the 2 senate races in Georgia that will face a runoff on January 5th is so critical; to Biden’s agenda…to solving the climate crisis, to ending racial injustice and economic inequality. To make happen what needs to happen, Biden must take bold steps, like Roosevelt did to lift us out of the Great Depression in the 1930s and it will be almost impossible if Democrats don’t have the Senate.

So between now and January 5th, that’s a key fight to focus on, those of you who follow my blog and live in the U.S. (and I do love that people from other countries follow my blog!!!!). We need to register new voters, the youth who will have just turned 18, and any voters who didn’t vote this time must get to the polls.

Then, who Biden appoints to his cabinet is critical and will send a major message about what he plans on doing. If it’s a bunch of white men from business and Wall Street we can forget about it. His cabinet needs to look like the coalition that got him elected and they need to support the decarbonizing of this country and the move to a sustainable, green energy sector. Just about every department, Labor, Transportation, Energy, Agriculture, Trade, Commerce, will have a role to play in that and must be on board. These appointments are being decided now, during the transition. Write letters to Biden telling him: No lobbyists, no connections to fossil fuels, no Fed connections in his administration.

Then here’s what we need to make sure the new president will do by executive order in his first 10 days:

That’s what I’m going to be working on with Fire Drill Fridays and Greenpeace. Do you know that our volunteers contacted 4.4 million climate voters in battleground states who sat out the last election!!! More than double our original target. GO PEOPLE POWER!!!!

Share This Post
Previous ArticleWHAT WE HAVE TO FIGHT FOR WHEN JOE BIDEN WINSNext ArticleSCREW IT! I’M GOING TO DECORATE!
61 Comments