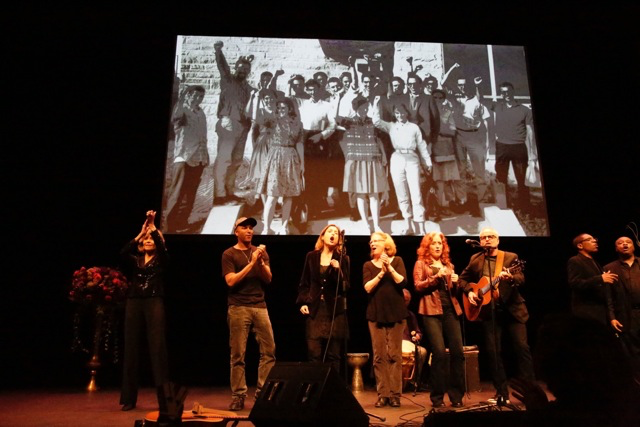 The memorial ended with a rendition of “Ain’t Gonna Let Nobody Turn Me Around” led by Bonnie Raitt, together with the members of the First AME Choir. Left to right: Me, Tom Morello, Barbara Williams, Holly Near, Bonnie Raitt & James McVay with the guitar.

Tom died last October surrounded by people who loved him. For the last 4 months, Tom’s widow Barbara Williams, Troy Garity, my son with Tom, and I have been working together to create a memorial that honored and celebrated Tom’s 6 decades of commitment to peace, justice and democracy.

In the course of preparing the memorial, I reread many of his books and speeches, watched films, news footage and interviews of Tom that Troy and Barbara assembled and read letters that friends and colleagues of his were sending in about the impact Tom had on their lives. And I was able to see with even more clarity than when he and I were together what an extraordinary life of dedication he lived and what a lasting impact he had on countless lives.

From a working class family in Royal Oak, Michigan, a student and alter boy in the arch conservative Father Coughlin’s Temple of the Little Flower, Tom became editor of the prestigious Michigan Daily and, after reporting on the new Free Speech Movement in Berkeley in the early 60’s, the civil rights bus boycotts and sit ins in the South, he stepped out from behind his notepad and became an organizer and builder of movements. He was able to whisper to me the day before he died that seeing people willing to die for their beliefs changed him forever. And it was ‘forever.’ He never stopped trying to make Democracy a reality.

We held the memorial at UCLA’s Royce Hall on Sunday February 19. People came from all over the country who had been in the trenches with Tom, some from the very beginning. There were people who were part of creating the seminal Port Huron Statement on which Tom was the lead writer and editor— the document that laid out in beautiful, even soulful, language an entirely new vision of what a Democratic society would look like. It was a profound departure from the doctrinaire, ideological view of the “old Left” and it brought hope and inspiration to a new generation of young activists who came together as SDS: Students for a Democratic Society. To illustrate the cultural impact that the Port Huron Statement had, we were able to get clips from “Mad Men” and the film, “The Big Lebowski” in which characters talked about the document and how “cool” it was.

Two of the Chicago 7 defendants, Rennie Davis and John Froines, were at the memorial.

Troy, Barbara and I had the speakers arranged in chronological order so that one could see the entire sweep of Tom’s life as an organizer/strategist/movement builder/writer/journalist/State Senator.

Troy, edited a wonderful opening video called “Who the Hell is Tom Hayden?” and then started everything off with an emotional, funny and welcoming speech that really set the perfect tone.

A beautifully emotional Alfre Woodard read from Tom’s memoir, Ed Begley spoke about Tom’s commitment to the environment and how it changed his life, ending by saying that he named his daughter Hayden in Tom’s honor.

Bobby Kennedy Jr spoke about Tom’s Irishness and why the Kennedy family asked Tom to be one of the pall bearers at Robert Kennedy’s funeral. Kevin DeLeon, President Pro Tem of the California Senate, talked about what Tom accomplished as a member of the state legislature for 14 years when term limits forced his retirement. Delores Huerta spoke. Bonnie Raitt, a longtime friend and supporter of Tom’s, sang “Change is Gonna Come.”

Two of the most moving speeches were made by Alex Sanchez and DeWayne Holmes. Both former gang members who evolved into becoming successful peace activists. DeWayne, born in Watts, and Alex who as a child immigrated from El Salvador to escape the bloody civil war that ravaged his mother county. Both spoke of how Tom had believed in them despite their troubled pasts. Tom had been able to see “ past their tattoos to who they really were” and made it possible for them to completely turn their lives around. He hired them to work on his Senate staff, and even traveled with them to El Salvador to witness the gang violence that forces so many young people to seek refuge in the US. I was far from the only one in tears as I heard them speak about Tom. For years Tom worked tirelessly to stop the gang wars, helping support Homies Unidos and other efforts which allowed young men and women to leave the gang life and become community leaders. This is what is needed instead of walls.

I will summarize some of what I said at the memorial because I think it speaks to what needs to happen today in this country: I spoke of my 17 years with Tom which began in 1972 when the peace movement was flagging after years of repression and sectarian divisiveness. Tom knew that the recent release of the Pentagon Papers had changed the national landscape and that it was time to pull back from radical action and take the anti war message right into the heart of middle America.

I didn’t realize at the time what a brave and controversial departure that was for the Peace Movement and how much heat Tom took from the left for adopting this educational, grassroots strategy with it’s congressional focus. As I said in my speech, “… let’s think about that strategy for today.” It was called the Indochina Peace Campaign, IPC.

Together with singer Holly Near, POWs Bob Chenowith and George Smith and others, the IPC tour began at the Ohio State Fair and traveled to 100 cities in 3 months during the fall of 1972. Our message was that Nixon was lying about ending the war. Yes, our ground troops were coming home but the air war was being escalated unbeknownst to most Americans and, in the south, our allies were imprisoning, torturing and corrupting Vietnamese civilians in our name. We delivered our message— demand that Congress cut aid to our puppet regime in Saigon—in union halls, churches, editorial boards, on campuses, to crowds of sometimes 10,000 people. We distributed over a million pieces of educational literature. I got pregnant during the tour in a motor home en route to Buffalo, NY. That was part of our shared commitment to the future.

What a soaring speaker Tom was. He had a non-rhetorical way of putting big new ideas together so that people saw themselves in the narrative. I would watch the audience hanging on his words as he broke their hearts open and then filled them with hope and new understanding.

The Watergate scandal and the unraveling of the presidency gave decisive new leverage to Tom’s Congressional strategy and in the fall of ’73 the IPC tour went out again with the same team plus 3-month-old Troy who slept in dresser drawers along the way. The strategy worked. Congress to Cut Aid to Thieu.

With the war over, Tom could see that the Watergate scandal had created cracks in the walls of the establishment and that now was the time for progressives to squeeze through those cracks and run for office. You see, Tom wanted to win. He understood that progressives had to be prepared to take power and learn to govern, not just protest…something else we would do well to think about for today.

I was with Tom when he visited Cesar Chavez to ask whether he should run for the U.S. Senate. Cesar thought for a few moments and then said, “It only makes sense if you build a movement out of your campaign structure when it’s over.” And that became CED: The California Campaign for Economic Democracy that got scores of progressives elected to state and local offices and many measures passed like Prop 65.  Again, don’t we need CEDs today—-in every state?

Along with her son with Tom, Liam Hayden, Barbara ended the program by performing her song, “Push That Rock”.   In 2015 Tom wrote:  “My wife Barbara Williams has added a new meaning to the Albert Camus story of Sisyphus, who was condemned to push the rock back up the hill eternally. In her version, in pushing the rock we become stronger, not weaker. The chant “Push that rock” is realism for radicals and reformers today.”  Following Barbaras song, members of the First AME Choir  Tom Morello, Holly Near, Bonnie Raitt and James McVay and myself joined Barbara on stage for a rendition of Aint Gonna Let Nobody Turn me Around, appropriately ending the memorial with everyone on their feet and singing along.

Kristy Edmunds, Director of UCLA’s Royce Hall, wrote this to me after the memorial. It captures what so many felt:

“I learned so much more about the efforts and events that have shaped and changed the directions of so many than I was conscious of—including those that have influenced and made possible my own course—I was awakened to such gratitude, and I found myself gaining inspiration and an inner charge to press forward with even more boldness. Yes, I can do more! And I will.”

I know that we all came away with a renewed commitment to making Tom’s vision of a true Democracy into a reality. Seize the time!