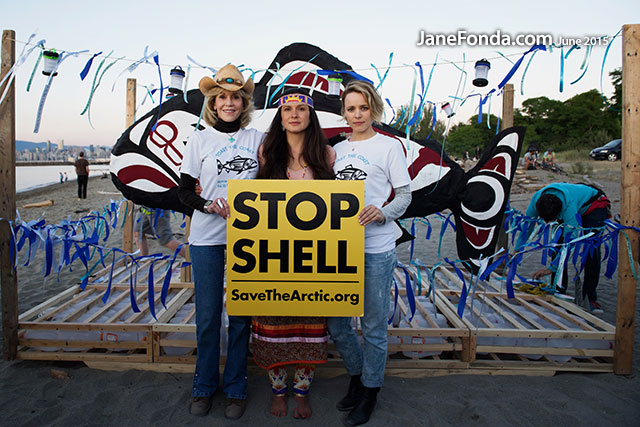 I’ve been in Vancouver for 2 days where I joined with Greenpeace activists, First Nations peoples, parents, grandparents, professors, students at an amazing 6-hour ‘Toast The Coast’ rally on Jerricho Beach to celebrate the pristine beauty of the Northwest coastline and to stop Big Oil from devastating it: Shell’s preparing to drill in Alaska, new pipelines are proposed to bring tar sand oil to the coast, more oil-carrying super tankers running up and down the coast. Remember Exxon Valdez? 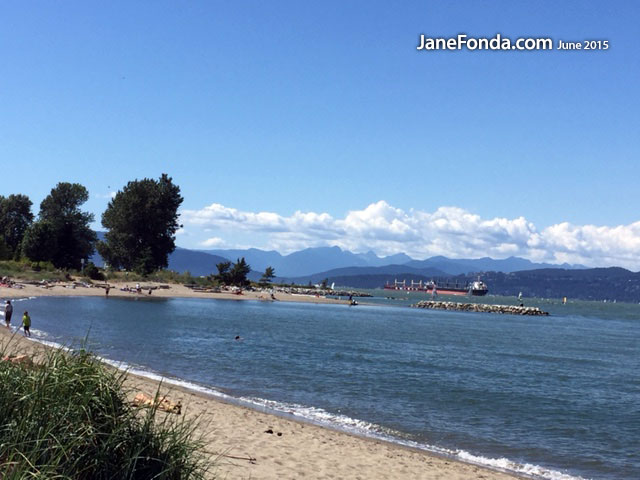 A very diverse coalition has grown rapidly here and includes people of the Musqueum, Squamish and Tsleil’ Watuth Nations who live along the coast and whose livelihood depends on the health of that shoreline. These First Nations together with local citizens—professors and retirees– have been unbelievably brave, putting their bodies and lives on the line by blocking tar sands expansion and pipelines in British Columbia…at least for now. They face enormous legal fees as the Enbridge and Kinder Morgan try to stop them. I came here to add my voice to theirs in opposing Artic oil, pipelines and increased super tanker traffic in this beautiful part of the world. 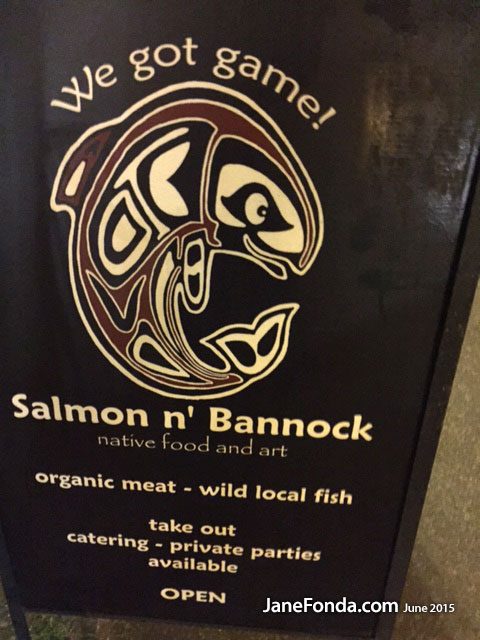 The first evening, I had dinner at a First Nations restaurant, Salmon n’ Bannock. It was a first for me and the food– all indigenous recipes, fresh and local– was delicious. 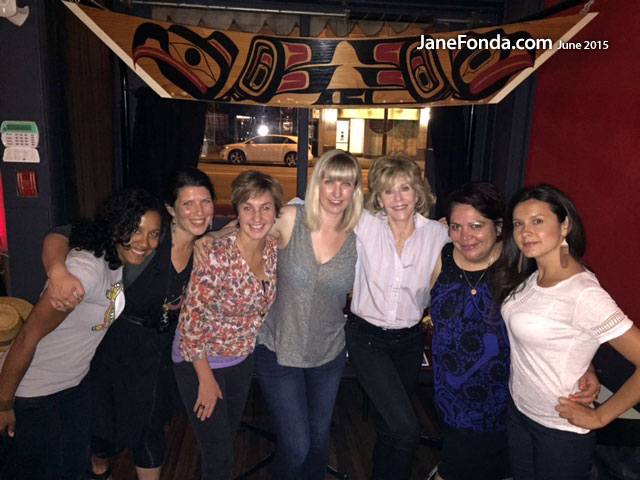 I was with my hosts, Greenpeace leaders and activists (left to right): Jesse Firempong (PA to Joanna), Jessica Wilson (Head of Greenpeace’s Arctic program), Joanna Kerr (Executive Director of Greenpeace Canada), Christy Ferguson (Director of Programs in Canada), me, Ines (restaurant owner), and Melina Laboucan-Massimo, a leading First Nation’s activist from Alberta, whose home is in the tar sands. She told tragic stories of the destruction of her people’s land, air and water and of the cancers that are epidemic in communities near the tar sands. She is preparing to bring asolar industry into the area to provide alternative energy and clean jobs. 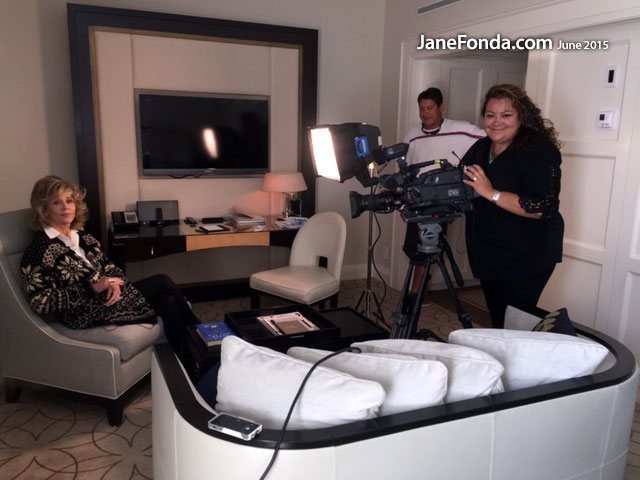 My first day was spent doing TV and print and radio interviews about why I’m here and what we’re trying to do. Here I am with Tina House, the journalist interviewing me for the first Aboriginal People’s Television Network. 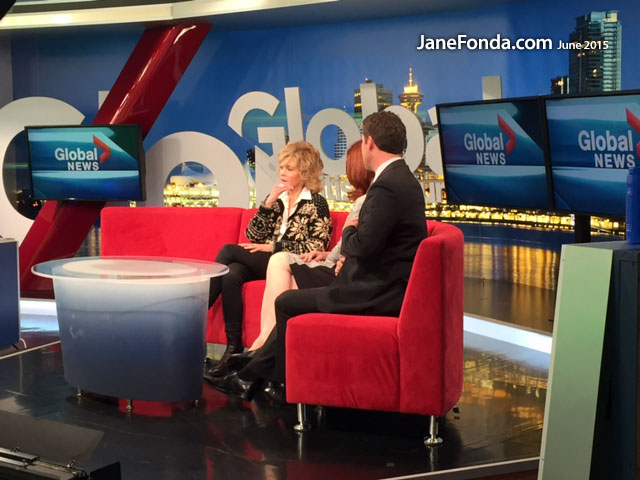 And here on Global Noon News being interviewed by Lynn Collier and Jay Durant. I did a total of 11 interviews and at the end of that day, we got news that the G7 Summit of leading world powers had just committed to getting the global economy off fossil fuels by the end of the century. This is a huge victory made possible by 2 years of global public mobilization and it deserves celebration. It is proof that the mindset is changing. But we still have much work to do because we need to be fossil fuel free BEFORE the end of the century if we stand of chance of averting climate catastrophe. 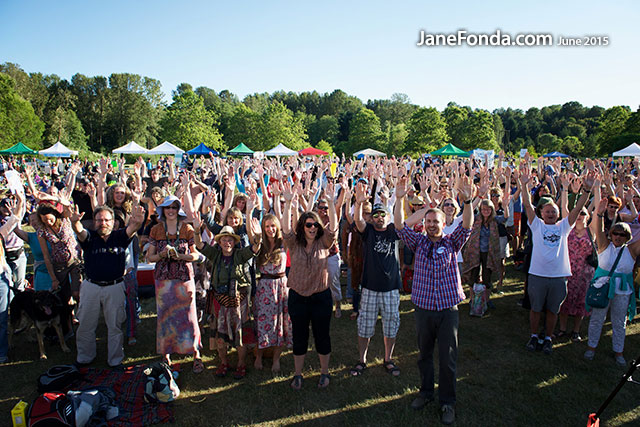 The Toast The Coast rally was a moving, inspiring and colorful. (photo credit Jason Van Bruggen) 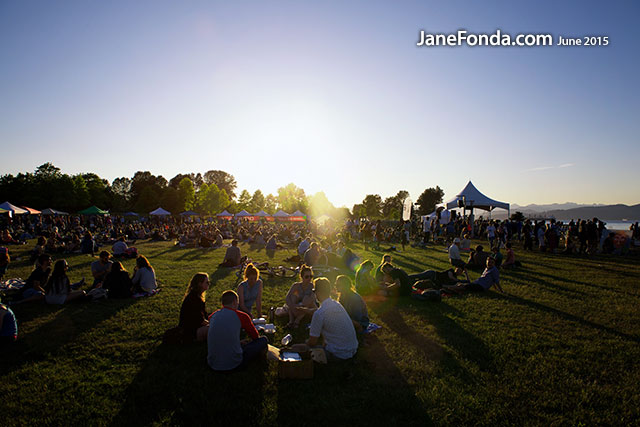 From 4pm to 10, there were speeches and a variety of rousing music. We were told 5000 people came through during the rally. (photo credit Jason Van Bruggen) 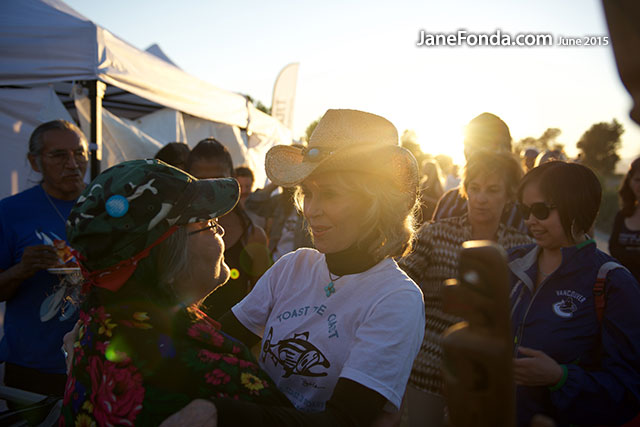 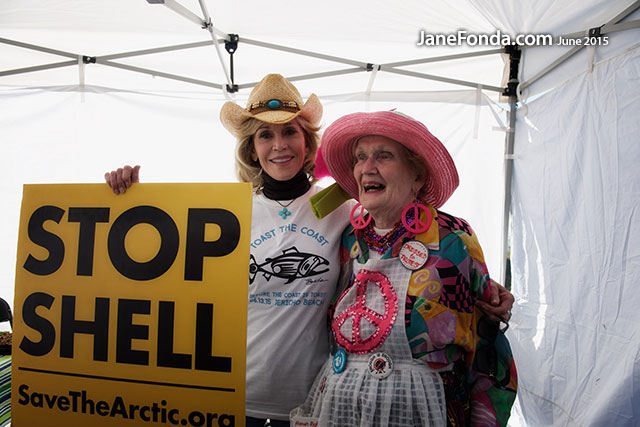 I also spoke with ‘Raging Grannies’ like the dozen recently arrested for tying themselves onto the giant Shell rig waiting in Seattle’s harbor. (photo credit Jason Van Bruggen) 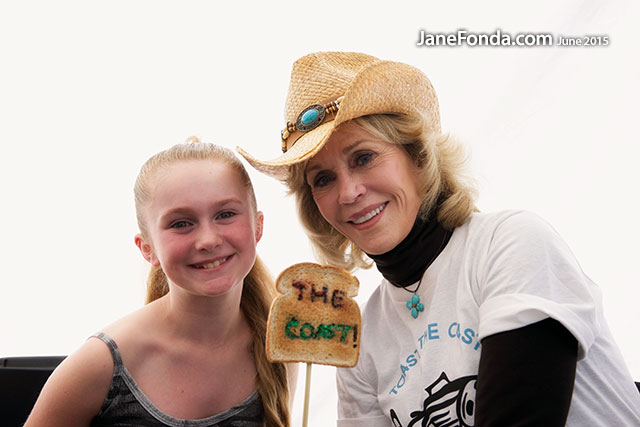 I met an 11-year-old girl named Tyger, who is a climate activist because she “feels happy when she’s with people who are passionate about a cause.” She bakes and sells cookies to raise money to go to Paris early December for the critical climate summit. (photo credit Jason Van Bruggen) 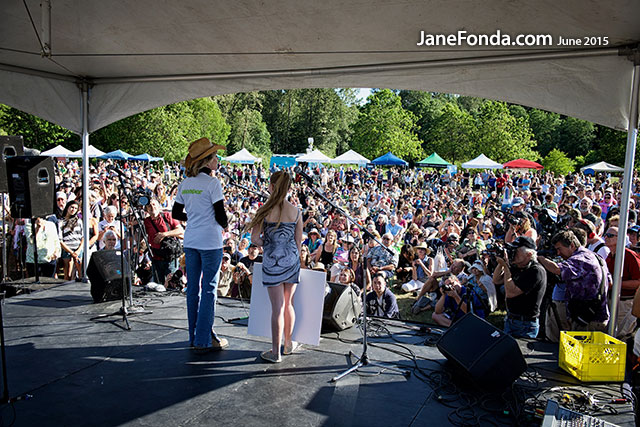 I invited her to come on stage with me when I spoke. I needed a grandchild fix but also it visibly demonstrated the generational span of opposition to Big Oil. (photo credit Jason Van Bruggen) 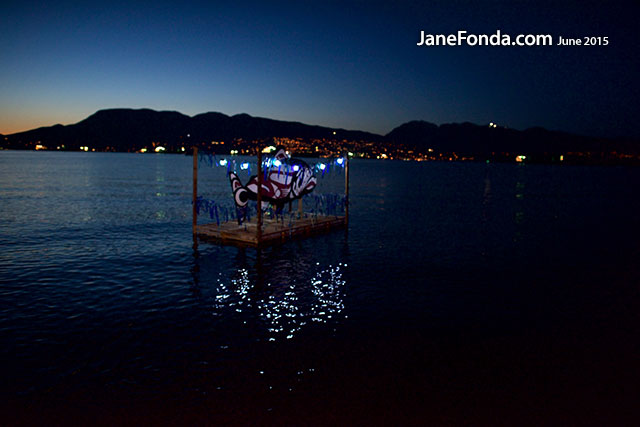 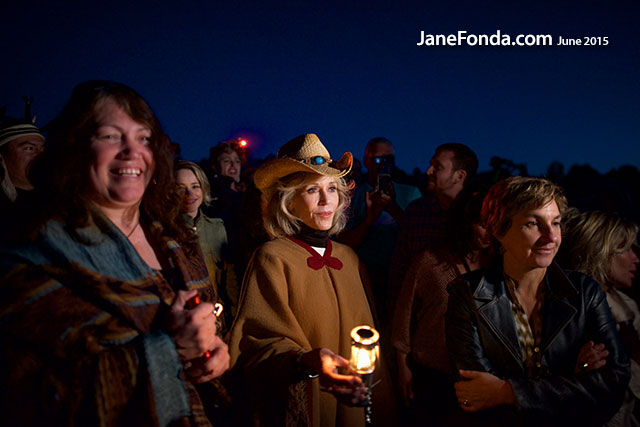 At sundown, we all walked to the beach where the salmon lantern was set out to sea. The salmon are a powerful symbol of regeneration and perseverance for the Coastal Peoples. They swim for 1000s of miles to leap up the falls of these coastal rivers to spawn. These fierce creatures are at risk if oil spills destroy their spawning grounds. (photo credit Jason Van Bruggen)

99 percent of climate scientists agree that if climate warming is to be kept at or below the internationally agreed upon 2 degreesCelsius there are a number of oil reserves that must stay in the ground. Arctic oil is part of this, and yet Shell plans to drill offshore in a matter of weeks.

President Obama has given permission to Shell to take advantage of the melting Arctic ice and drill there! I find this quite unbelievable given the good climate policies he has championed and given his stated desire to leave a strong climate legacy. Not when there are timely (and increasingly affordable) alternatives, not when the U.S. Department of Interior says there’s a 75% chance of an oil spill; not when there is no help for 1000 miles should such a disaster occur; not when Shell tried Arctic drilling in2012 (after giving assurances that they’d done all that was needed to guarantee safety) and it was a catastrophe: The giant rig was smashed “like a can of beer” (as the New York Times article said about the disaster) and the men on board had to be helicoptered to safety. 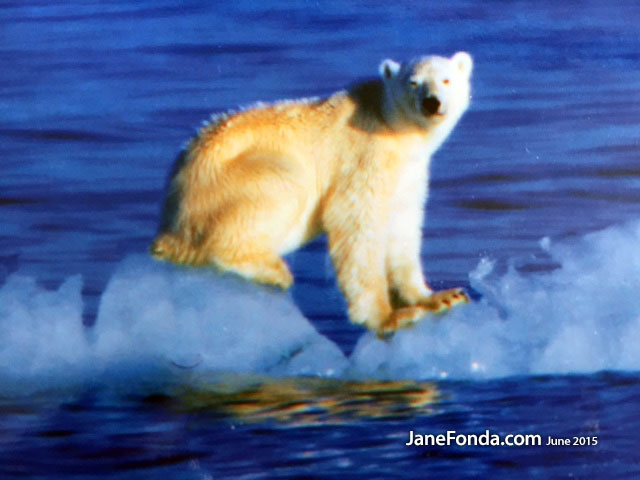 Even if there is no spill, if we allow Shell to drill, pump and burn that extreme Arctic energy, we will fail to slow global warming; precious species will go extinct. This is what’s at stake in the Arctic.

The Alberta Tar sands (the largest industrial project in the world) are another oil reserve that must not be expanded. Several new pipeline projects, beyond Keystone XL, are being proposed that would expand production in the tar sands and bring that unconventional energy (known as ‘extreme energy’) to the ports of British Columbia and out east across Canada. Already the drilling is threatening the health and environment of people living near them. Now the coast is at risk. Tar sand oil (bitumen) is extremely energy intensive to extract and about 3 to 4 times more damaging to climate than conventional oil. Moreover, spilled tar sand oil, diluted in salt water and buffeted by waves, sinks instead of floating on the surface as the BP Deepwater Horizon spill did making it virtually impossible to clean up.

There are 7 million people already around the world who say ‘no’ to Arctic drilling and ‘yes’ to Arctic protection. More are joining them every day because people are waking up to the fact that if we continue down the road we’re on—fracking, drilling, stripping and burning– it will mean even more extreme climate conditions, vast human migrations on a level never seen, more cancers and other environmental sicknesses, species extinctions, more ice will melt, coastal regions and entire island nations will be wiped out and economic disparity will deepen.

But why take that road when there’s an alternative road that leads us away from fossil fuel extraction and into the new world of renewable resources? With this road comes hope, economic democracy, plentiful clean jobs, because more jobs are created per dollar invested than are created by extractivism. This road is no pipe dream. We can see solar, wind, biogas and hydro already working in Norway, Austria, the Netherlands, and Germany, where 25% of its energy comes from renewables and its energy transition has created 400,000 jobs in a decade.

The Big Oil people and the politicians whose campaigns they finance and the right wing think tanks also funded by the wealthy extractivists will try to convince us that 1) global warming is false and 2) that we cannot wean ourselves from fossil fuels because the alternatives wont be able to satisfy huge energy demands. They’ve got it all backwards because it benefits them—and only them. If we believe them, they’ll get richer and richer and everyone else will get hotter and sicker.

Listen to me: There is no need for big oil to keep drilling and spilling. We have enough fossil fuel in existing reserves to carry us over until we have 100% green energy. And we can do it IN TIME! We can meet the target 2 degrees Celcius in this decade but not without people—everyone, no matter who you are or what you do–mobilizing to stop the Big Oil radicals who are demanding the right to rape the earth in their quest for dangerous extreme energy in dangerous, extreme places. 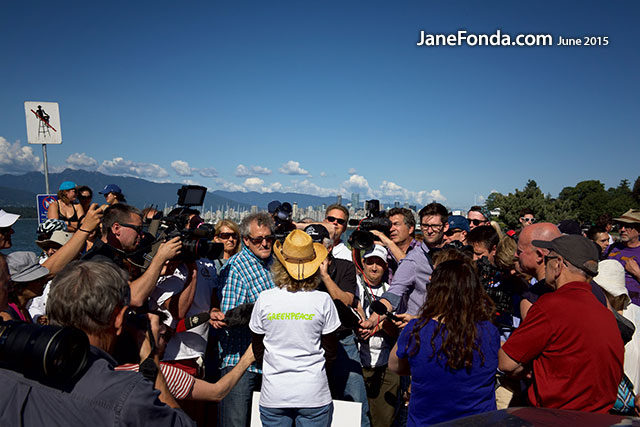 Thirty years from now, I want my grandchildren to be able to look back and say, “Grandma was on the right side of history.” Join me. See the link below for ideas of what you can do. (photo credit Jason Van Bruggen)
https://secure3.convio.net/gpeace/site/Advocacy?cmd=display&page=UserAction&id=1785&s_src=fbpost&s_subsrc=150612bear