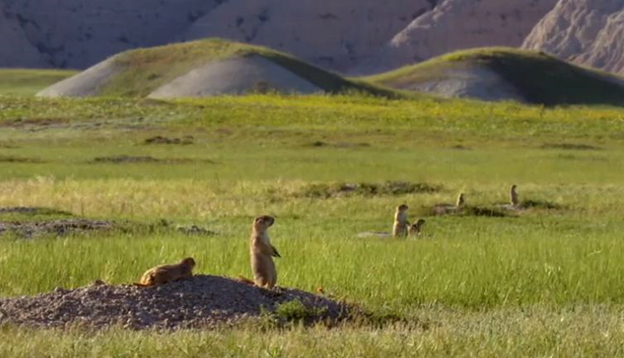 There’s a lot that Ted Turner taught me during the decade we were married and during the more than a decade that we’ve been unmarried but close friends. But one of my most favorite things I learned from him was to love prairie dogs. Please don’t stop reading now that you know I’m writing about prairie dogs and not some tasty gossip about my favorite ex-husband. Please don’t. Please stay with me, even if you’re a cattle rancher or a rancher’s wife or someone who loves to find things for target practice.

While we were married, we spent much time in the Great Plains–in New Mexico, South Dakota and the Sand Hills of Nebraska. Especially in New Mexico, I would spend hours watching the way prairie dogs behave, how they pop up out of their underground dens and stand on the mounds in what looks like the start of a Sun Salutation. Sometimes, their little paws press together as if in prayer. 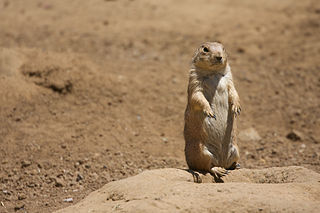 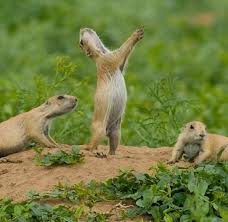 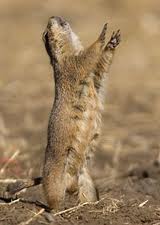 I loved watching the young ones play and how they flattened themselves out in the dust when they were hot. At least that’s how I interpreted it. Maybe they were just tired. 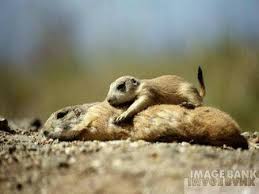 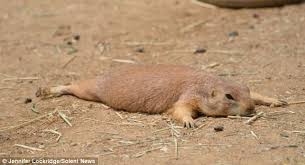 I discovered that prairie love to kiss. It starts when they’re very young and continues, maybe as a way of getting to know dogs from another den or maybe just a way of acknowledging love. 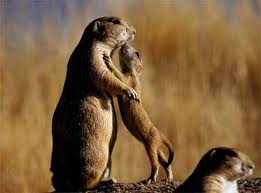 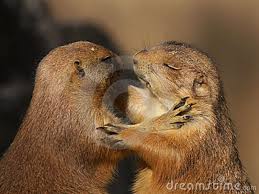 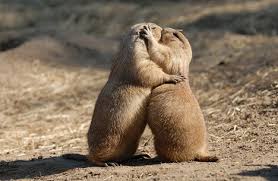 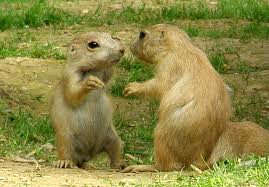 From Ted, I learned that these fascinating little creatures are what’s known as a ‘keystone species,’ a linchpin of prairie ecology. Eradicate them and you create a domino effect, imperiling a host of other species that depend on them. At the time Louis and Clark made their famous expedition through the West it is estimated that there were five billion prairie dogs living across one hundred million acres. Today there are fewer than 5% of their original number.

From Ted I learned that the black-footed ferret was extinct in the wild because their only food was the prairie dog and as the prairie dog numbers declined dramatically, these ferrets disappeared. A few were being kept in zoos and Ted wanted to restore them to their natural Great Plains habitat as he is doing this with many native species on his 2 million acres–from bison, wolves and Desert Big Horn Sheep to snakes, bees, woodpeckers and plants. To understand the scope of Ted’s conservation undertakings–what’s known as “re-wilding,” I urge you to read “Last Stand: Ted Turner’s Quest to Save a Troubled Plane,” by Todd Wilkinson. It is powerful and, for me anyway, very moving to learn how this brilliant, maverick media mogul is creating a template for other landowners (and they don’t have to be of the super wealthy variety although when these latter follow Ted’s lead, it’s possible that a tipping point of conservation may be achieved. What Ted shows is that environmentalism and prosperity can coexist. )

Recently, a house guest at my New Mexico ranch gave me a book by Terry Tempest Williams called “Finding Beauty In A Broken World.” It is a beautiful, profound book and, wonder of wonders, she devotes many chapters to prairie dogs. Williams says “More than 200 species of wildlife have been associated with prairie dog towns, with over 140 species benefitting directly. . . .Nine vertebrate species may drop in population or disappear completely if prairie dogs are eliminated from the grassland ecosystem.”

Yet many people in the West consider prairie dogs heinous vermin, varmints that they are committed to eradicating by poisoning their dens with cyanide, strychnine, or fumigation. There are actual organizations devoted to this such as the Red Mist Society (when shot, the prairie dog’s bodies explode in a bloody, red mist), The Varmint Hunters Assoc., among many others. There are guys who think it’s fun to round up some buddies, a chest of cold beer, and spend a weekend afternoon competing for who can kill the most prairie dogs.

The reason behind this desire to exterminate these native ground squirrels is that for many generations, they’ve been considered competitors with grazing cattle. There is, I believe, some truth to this. If ranchers don’t rotate their cattle so they aren’t constantly eating the same pastures, they and the prairie dogs will eat the grasses down to nothing. If, however, cattle are managed the way Ted manages his herds of bison and other ranchers manage their cattle, then the co-existence of prairie dogs and livestock can be of mutual benefit. If this were not the case, the two species could never have evolved together for millions of years, working jointly to make the vast western plains as bountiful as they were.

Both bison, themselves a keystone species, and prairie dogs originated during the Pleistocene era and evolved together over 2 million years. Bison keep the grass cropped low, thereby allowing the prairie dogs to see predators approaching as they stand in prayer pose on their mounds. And the way prairie dogs prune the prairie grasslands creates very nutritious grass for bison or cattle. If one pays attention, you can see that, especially at spring green-up time, livestock even prefer these pruned grasses. Also, the prairie dog’s underground dens trap water, and help aerate the soil.

In the ’90s while I was with him, Ted created the Turner Endangered Species Fund and on several of his ranches he has allowed enormous prairie dog colonies to develop. On his Vermejo Park Ranch in northern New Mexico, in addition to a vast prairie dog colony, he has established a black-footed ferret captive breeding facility. As adults, some of the ferrets are moved to other locations where there are sufficient prairie dogs to sustain them and a carefully monitored number of them are allowed to run wild on the Vermejo. Very few people can claim to have been responsible for the restoration of a species and NEVER has it been someone whose life was spent, not as a biologist, but winning sailing championships and changing the landscape of the media.

When the sun is just right, it is an awesome experience known to all too few of us, to sit very quietly just at the edge of Vermejo Park’s prairie dog town where there are now 120,000 of the animals on 8,000 acres and see them standing on their mounds, saluting the sun, as far as the eye can see. I know. I’ve done it.

I want to quote from Terry Tempest William’s “Finding Beauty In A Broken World.” This is an excerpt from a letter the author received from biologist Constantine Slobodchikoff who spent 20 years researching communication patterns among prairie dogs and proved that they have the most sophisticated animal language decoded so far:

“One of my PhD students did a comparative study of the alarm calls of all five species of prairie dogs, calling for her when she was wearing either a yellow shirt or a green one. All five species had distinctly different calls for the two colors of shirts. Also, each species had different vocalizations for each color, suggesting that each species has its own language, but the languages differ from one another, much as German, French, and English differ.

“We just finished a study of black-tailed prairie dogs, showing that they had the same kind of descriptive elements in their alarm calls as the Gunnison’s, describing the color of the clothes and the size and shape of different humans. We also slowed that they could remember when someone shot a gun, and could incorporate this information into their alarm calls, calling in a way that was distinctly different from the alarm calls they gave to the same person prior to his shooting the gun. So my guess is that each species has a very sophisticated language, and has the cognitive capacity to detect subtle differences among predators and incorporate information about these differences into the alarm calls.

“I am hoping that this work will help show that prairie dogs, and all animals, are not just mindless robots that can be disposed of as vermin or property but as sentient beings that should be treated with empathy and respect.” I hope so too. That’s why I’ve quoted this here.

When I first started spending part of my life near Santa Fe, there was a nice size prairie dog colony along the railroad tracks parallel to Cerrillos Rd. near St. Francis. Now, development has eliminated the colony. The last time I was there, I noticed one lone prairie dog mound on the other side of the road sandwiched into a tiny triangle of dirt in between a some chain link fence. I cannot rid myself of sadness ever since. I can’t stop thinking about that little family. I pray that they survive.

I think all the time of how interdependent life is . . . all of life. We homo sapiens are no different, yet we are doing what even the sorriest of dogs don’t do unless they’re sick: we’re soiling and destroying our own kennel–Earth.

I want to close this blog with another quote dealing with interdependence. It’s from “The Faraway Nearby” by Rebecca Solnit:

“Some species of yucca plan and of moth depend upon each other. The white moths hatch out of their cocoons as the white flowers open. They mate and the female pollinates the flowers while laying her eggs in them, so that they will produce the fruit on which her offspring will feed. The yucca survives only by the pollination efforts of this moth, the larvae survive only by consuming this particular fruit. They would not exist without each other, and the yuccas of these species grown elsewhere have to be hand-pollinated.”

We cannot, as a species, risk losing more species. Let’s think about this ad do all we can, individually and collectively. 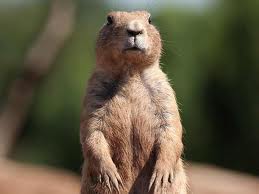 Share This Post
Previous ArticleAT THE PREMIERE OF “THE BUTLER”Next ArticleA VISIT WITH NEW FRIENDS IN MIDDLEBERG, VIRGINIA
69 Comments