I have gotten amazing, heartfelt feedback from people who are working out with my last two DVDs. One woman said she was 80 years old and had never exercised before in her life but was ‘hooked’ by my videos (her son gave them to her) and felt better than ever. Younger people who have gotten out of shape are telling me the same thing.

While I was researching my book, “Prime Time,” I was struck by the depth of research showing that staying physically active is just about the #1 factor in whether you have a good Third Act or not. As Jane Brody, New York Times health writer says, “It’s not that very old people…can exercise because they are healthy…rather, they achieve a healthy old age because they exercise.” Activity strengthens the heart and bones, improves circulation, reduces obesity, thickens the skin and can help with depression because of the endorphins released into the system. Endorphins are brain chemicals that give relief from pain, enhance the immune system, reduce stress and bring us a sense of well-being. For some people it takes only ten minutes of moderate exercise to experience the endorphin rush. For others it might take 30 minutes.

Some people mistakenly think, “Oh, I can’t exercise. I’ve never done it…or I stopped that years ago!” Well, we’ve all heard the truism, “Use it or lose it.” What this leaves out, however, is that if it’s lost we can get it back. Not only can we recover lost functions but “in some cases we can actually increase function beyond our prior level.”

It’s important to do both cardio (aerobic) as well as resistance exercises. Aerobic activity is the only thing that gets rid of fat from all over your body including the marbled fat deep inside your muscles — dieting alone can’t do this. There’s more: All brain experts will tell you that physical activity will do more for brain health than the expensive computer-based brain games that are so the rage these days (though doing both might not be a bad idea!). Aerobics also helps the brain by reducing the risk of heart attack and stroke and improves cognitive functioning by slowing the age-related shrinkage of the frontal cortex of the brain which is where “executive functioning” like reasoning and problem solving take place. Reports show that as many as fifty million older Americans may get Alzheimers by mid-century. While research is underway to prevent or postpone the disease, scientists already know, as Jane Brody writes, “…people who exercise regularly in midlife are 1/3 as likely to develop Alzheimer’s in their 70’s. Even those who start exercising in their 60’s cut their risk of dementia in half.” Now THAT’S saying something!!

All of us know that we tend to put on weight as we get older. This is due partly to our tendency to be less active while continuing to eat the way we always have. But it is also due to the fact that we lose, on average, 3 to 5 percent of our muscle tissue each decade after age 30 so that by the time we reach seventy-five, our resting metabolism (basal metabolism) will have slowed, and dropped by about 10 percent– unless, of course, we become active enough to maintain our muscles and consciously eat fewer (but more nutrient-rich) calories.

Here’s a dramatic example of what can happen: If you eat just 100 calories more than you burn up every day, you can expect to gain more than fifty pounds in five years. In order to lose this fat, you have to burn it up as a source of energy. (ie., if the calories you eat are less than the number of calories you are burning as energy, then the additional energy you need will have to come from stored fat.) To sum up: Aerobic or fat-burning types of activities will help with weight loss as will increasing your resting metabolism rate through weight-training or resistance exercise to maintain muscle mass. According to research done at Tufts on people fifty to seventy-two years old, muscle mass can actually be increased more than 200 percent with exercise.

I had been out of the workout business since the mid 90s, but what I learned from my research motivated me to get back into it. I created a new brand, Jane Fonda’s PRIME TIME workout. I figured ‘who better than me? I’m old, I’m have physical issues like most people, I can’t do what I used to do—jump up and down, splits, etc—and I have credibility in this area. Why not make a whole new series of programs for boomers and seniors that are safe and effective? Nobody else is doing it!’ 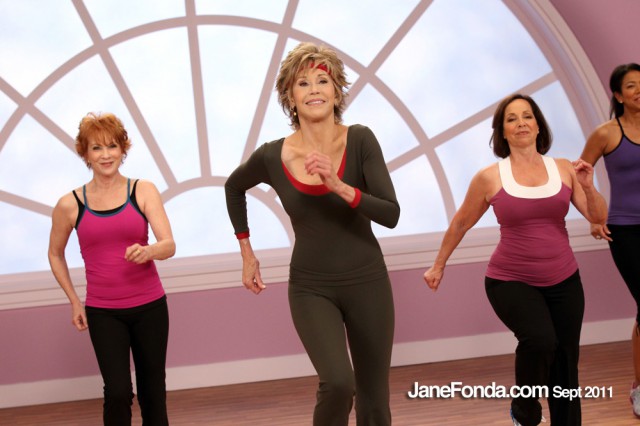 On the set of Firm & Burn

My first two DVD’s (Fit & Strong” and “Walkout”) came out last year and are best sellers they are currently available online and in stores. “Fit & Strong” won the Best Fitness Disc Award from Home Media Magazine. Now I am excited to announce the release of my two newest DVD’s. The first, called “Firm & Burn” is available right now at Target Stores. The second is called “Trim, Tone & Flex” and will be available, along with “Firm & Burn” in stores everywhere and online on December 6th. Both titles are available for preorder on Amazon. They are more like my older videos in that I have other people with me, real people, not models or buff dudes, and the music is fabulous: A live band on set doing Doo Wop, Funk, Latin…it’s really fun. 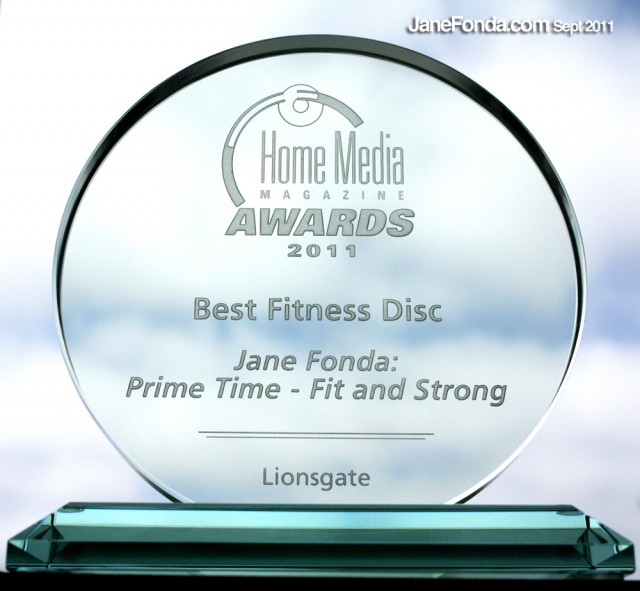 So just keep in mind what The MacArthur Foundation’s Study of Successful Aging, concluded: physical activity is “perhaps the single most important thing an older person can do to remain healthy… the crux of successful aging, regardless of other factors.”

And, please, if you do use these programs, let me know your thoughts—good or bad. You have no idea how much I learn from the people who write to me on my blog, facebook, and twitter.