Clearly, Germany has taken the lead in the realm of sustainability. Many corporations and other institutions and individuals from around the world compete for the German Sustainability Award and the attention it brings with. The reception area outside the hall where I spoke at the symposium on sustainability was filled with green products. 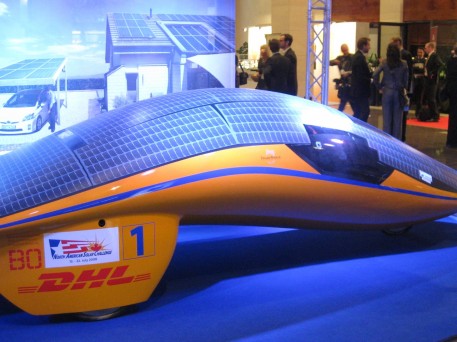 mock up of a solar racing car 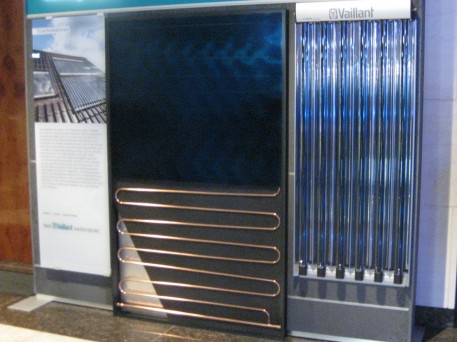 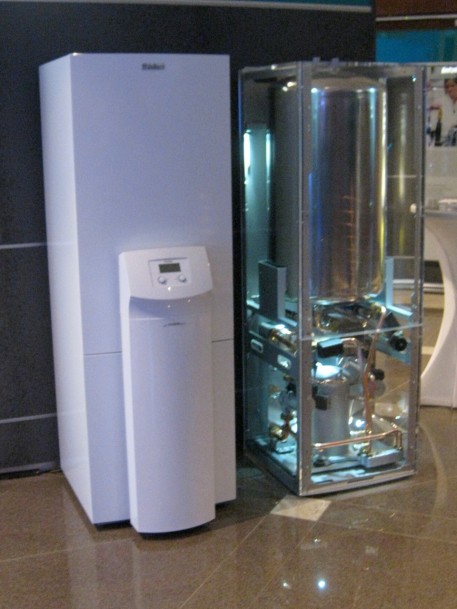 sample of a solar house heater 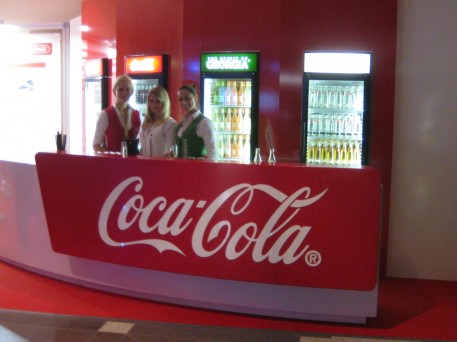 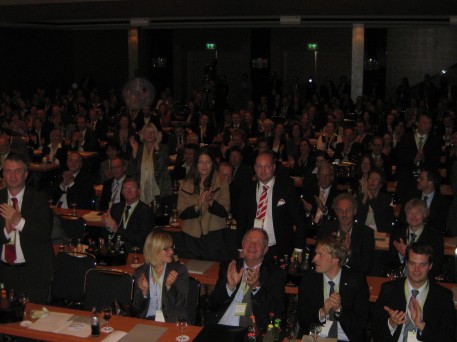 The audience in the symposium where i spoke. My message was about the importance of empowering women and educating girls if we are to eradicate poverty and create sustainable development.

It is said that you educate a boy and you change his life. You educate a girl and you change her life, her family, her community and her nation. Every research study on development indicates that countries with the highest population of uneducated girls are at the bottom of the economic ladder and at the bottom of every development issue. We know that every year of education increases a girl’s income by 15 to 30% and every year she stays in school is a year later that she will marry and begin to have children.

Longitudinal research shows that when women (rather than men) control the family income, more money goes to education, health and nutrition. Increases in female income improve child survival rates 20 times more than increases in male income. Likewise, female borrowing, rather than male borrowing, has a greater positive impact on school enrollment, child nutrition, and demand for health care. This is why enabling women and girls to become wage earners, entrepreneurs and micro credit borrowers has become such a powerful force for development.

I got a big laugh and round of applause when I said that New York Times writer, Nicholas Kristoff, writing about the financial crisis asked, “Would there have been a global recession had Lehman Bros been Lehman Sisters?”

I also bragged a little about the fact that my ranch uses solar panels for hot water and home heating and solar photovoltaic cells for electricity and that I have a septic tank that recycles all water, including toilet water, so that it can be reused for irrigation etc. I also drive a Prius (Toyota Hybrid car). My daughter drives an old Mercedes that she fuels with vegetable oil that she gets from various restaurants around Atlanta. 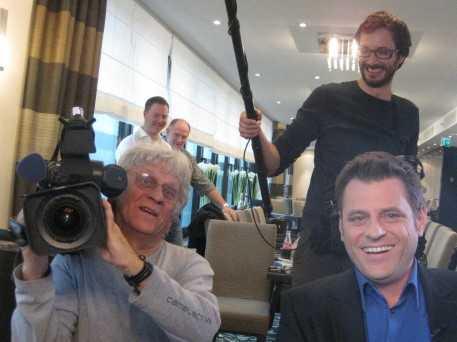 The first of many individual TV interviews following the symposium 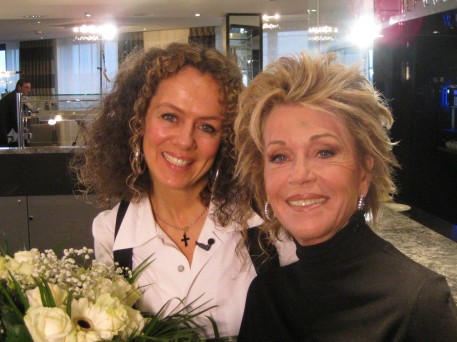 It’s been frustrating because the Dusseldorf hotel server was down so I haven’t been able to send my blog and now it’s a day late. Oh well… I have to remind myself that, not so long ago, we couldn’t have imagined communicating this way with so many people and be grateful anything works at all.

SO….to continue from the symposium where I gave my speech and girls. I was told Yusuf Islam (used to be known as Cat Stevens) and his wife, Fauzia Mubarak Ali, wanted to meet me. I so love his music which wallpapered so much of my middle years–”Where Will the Children Play,” “Moonshadows,” “Tea for the Tillerman,” “Wild World,” “Peace Train,” “If You Want to Sing Out, Sing Out” among many others. As you may know, Cat Stevens almost died of tuberculosis in 1968 when he was 19. This began his spiritual quest. Brushes with death can do that. His second near-death experience happened when he almost drowned off the coast of Malibu, California. He called out, “God, if you save me, I will devote myself to you.” A wave came just then and swept him to shore. That was when he left his music altogether to search for what form his commitment to God would take. In 1977 he became Yusuf Islam, a devout Muslim. 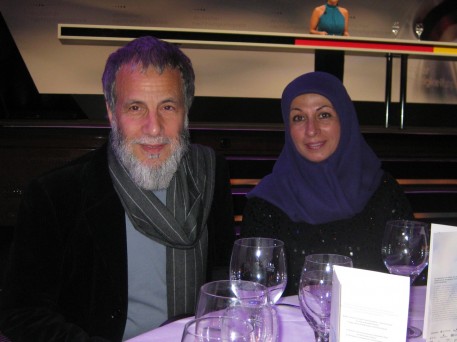 Yusuf Islam (used to be known as Cat Stevens) and his wife, Fauzia Mubarak Ali 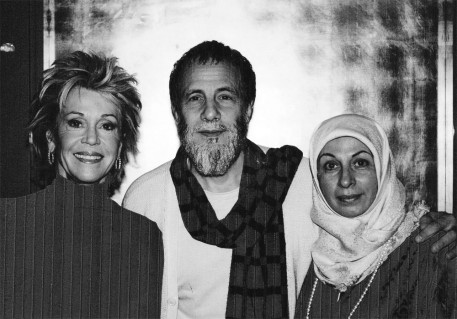 I was not sure what to expect when we met. Would he be a dour, overly serious, proselytizing man? Would his wife be silent and subservient? Would he shake my hand or refuse to be touched? How happy I am to say that the playfulness, the twinkle from the Cat Stevens days, (and the good looks) are still very present. He laughs, jokes, asks Fauzia if he’s correct in his interpretation of some aspect of the Koran. She listens and adds her two cents. She seems a woman of strength, centeredness and peace. She is also beautiful, with large, dark, soulful eyes. Fauzia is dressed in a crème colored robe but not veiled. My camera wasn’t working so I asked someone else to take our photo. The problem is they never sent it to me, so I took a picture of the two of them at our dinner table later on.

Yusuf gave up making music for years, unsure if music was accepted by the Koran. Then he learned that, in fact it was Muslim travelers who first brought the guitar to Moorish Spain. He started making music again in the 1990s. The tragedy of 9/11 showed him that while the extremes had becoming more dangerous, the middle was growing stronger. It was to the “middle” that he has directed his music, communicating through metaphor rather than politics. Music, he feel, is what is needed to sooth and uplift the troubled soul. Yusuf goes beyond metaphor, however, donating the proceeds from his music to a non-profit organization he founded, Small Kindness, which has helped survivors of 9/11, victims of the tsunami in Indonesia, victims of genocide in Croatia, children in Gaza among others.

He will soon begin a concert tour that will also introduce a portion of his new musical to the public for the first time. I hope he comes to the U.S. 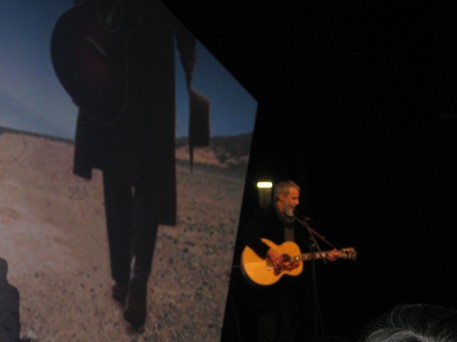 Yusuf Islam performing a new song, 'Road Traveler,' that will be part of the musical play he has developed 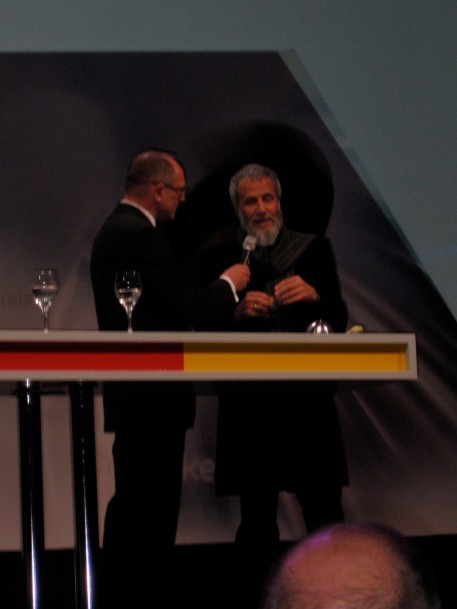 Stefan Schulze-Hausmann, CEO of Coment, the organization that produced the event, presenting a Sustainability Award to Yusuf Islam. 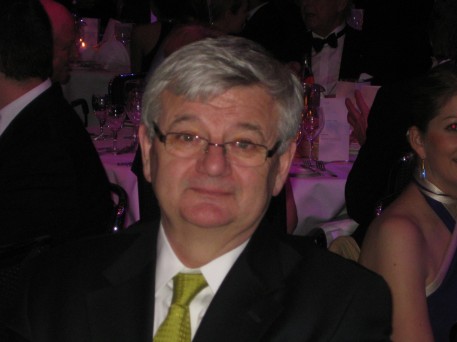 I sat at an interesting table at the evening ceremony. To my right sat Joschka Fischer, one of the founders of the German Green Party who was the first Green to be elected to the German government and later became Germany’s Secretary of State. He now focuses his work on encouraging corporations to become green and, together with our former Secretary of State, Madeleine Albright, works on solutions in the Middle East. 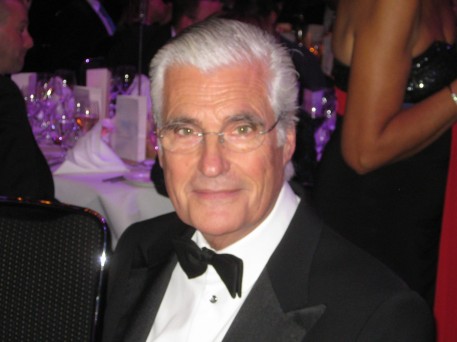 On my left, the most handsome Sky, the well-known actor and TV personality who interviewed me for his TV show a year ago while I was staying at Troy’s.

It was a late evening, little sleep before I had to get on the flight to Frankfurt and then on to Atlanta. I took my grandchildren to dinner last night and had a fun sleepover. I was exhausted but this was a perfect, grounding way to end a fascinating trip and welcome me home. By the way, unbelievable as it may seem, even to me, I return in 5 days to Dusseldorf for a UNESCO event!!! 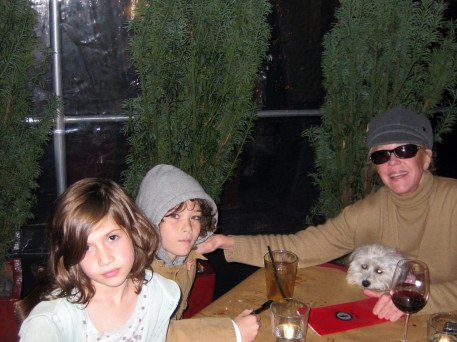 Home at last, having dinner with my grandchildren, Viva and Malcolm (and Tulea)

PS: OMG! I cannot Believe that it took my daughter, Vanessa, to remind me that Cat Stevens lived on our ranch above Santa Barbara, the Laurel Springs Ranch, in a beautiful house on a hill, 3000-some ft above the Pacific. Tom Hayden and I later ran a performing arts children’s camp there for 15 years. For some reason, I never met Cat then. Maybe he’s the one who told Joe Cocker about the place cause Joe lived there for a long time, later marrying Pam Baker, one of our camp directors. (There were many houses on the property and the Hill House had a separate entrance…)