Frankly, I’ve been worrying about the possibility that in the 15 months since we were last filming “Grace & Frankie,” I may have lost the ability to act. My main activity during those 15 months was hosting Fire Drill Fridays and interviewing climate experts and that’s really different than acting.

But last Monday we went back to the set and, turns out, I can still do it and I’m happy doing it. Some of our crew is new but most of the main people are from before COVID and it was really sweet to see them. Our Unit manager and producers have a knack for hiring nice and diverse people, so the set has always been chill. Actually, sometimes way too hot or too cold but always chill…if you get my meaning. 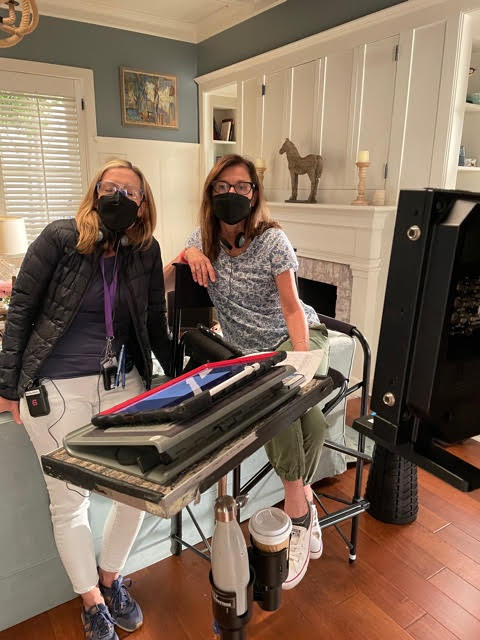 Kelly Akers, in charge of continuity, and, to the right, our director Gail Mancuso.

The COVID protocols are serious but not so overwhelming that they stifle our creativity or make things too difficult. I’m really glad we waited till now to return to work and not when the restrictions were even tighter.

Then there’s the problem of the Biden Administration. The planet is on fire. Climate scientists are sending grave warning that if we continue to drill and burn fossil fuels we risk catastrophe. This isn’t a game. This isn’t hyperbole. It’s way to late for half measures. Why did Biden pause the Keystone XL but say he supports Line 3 in Minnesota and will fight attempts to stop it in court? It’s the same heavy, dangerously polluting oil as Keystone from the Alberta, Canada tar sands passing under some of purest bodies of water including the headwaters of the Mississippi. Why does Gavin Newsom, California’s Governor, keep issuing new permits for drilling and fracking? Does he think we won’t notice or won’t care? What’s with these guys?

People, we need to up the ante. Get out of our comfort zones and make our voices heard. For those who can get there, there’ll be a big rally in front of the DC Capitol this Tuesday. We need to all do what we can to put maximum pressure on the Democrats to act bravely and boldly to save us and our planet. Time is running out but it’s not too late.