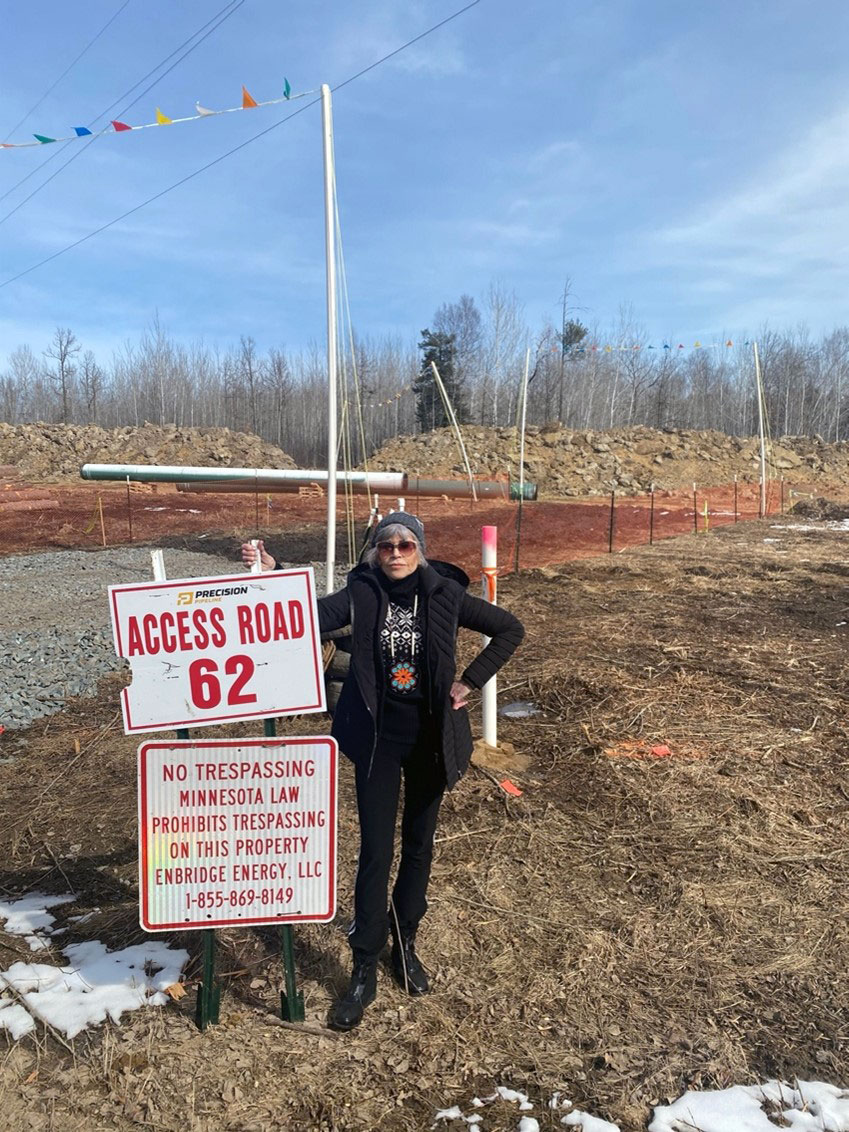 Arriving in Northern Minnesota and pulling off the side of the road to see firsthand Enbridge’s Line 3 Pipeline. This expanded Line 3 will have the capacity to carry 760,000 barrels per day of heavy tar sands oil through Indigenous lands.

In the face of a worsening climate crisis, with scientists telling us we must not permit any new fossil fuel development and begin a managed phase out of existing fossil fuel infrastructure, a Canadian Oil company, Enbridge, is pushing ahead with the largest project in its history. Known as Line 3, it’s a 1,097 mile crude oil pipeline extending from the tar sands of Edmonton, Alberta to Superior, Wisconsin.

It will expand an already existing line that Enbridge says it could operate without problem for a number of years, but it wants the new one to double the amount of oil that it’s transporting. This expanded Line 3 will have the capacity to carry 760,000 barrels per day of heavy tar sands oil through Indigenous lands, which could result in an annual increase of 193,000,000 tons of carbon emissions. The estimated carbon intensity of this pipeline is equivalent to the emissions from 50 coal fired power plants or two 38 million vehicles on the road.

Articles about Enbridge say Line 3 will “provide much needed incremental capacity to support Canadian oil production growth and US and Canada refinery demand.“

But we don’t want to do that!! We can’t do that and avoid climate catastrophe! Please, there’s a new team in town –Team Biden—and they tell us we must listen to science and science says—and this is really critical—we already have more developed oil, gas and coal than we can burn and stay within our carbon budget. There’s no wiggle room. Undeveloped fossil fuels must stay in the ground. We have but a decade to reduce our carbon emissions before we reach a tipping point when we lose control. Too many of the ecosystems that support life will start to collapse. This is not a rehearsal! This is a locomotive heading right at us. Help!

Please help me and all the Indigenous Water Protectors and their supporters to stop this. It’s every bit as dangerous as the Keystone XL and the Dakota Access Pipeline going through Standing Rock. On his way out, as a lame duck president, Trump greenlighted a number of these pipelines, illegally, without properly considering Treaty rights, environmental justice and climate impacts.

Hope is not lost.

President Biden can stop these risky pipelines by reversing all of Trump’s water crossing permits granted by the Army Corps. Trump did not follow a process based on science. Line 3 is at a critical moment as I type this message to you so we need to all help now.

Enbridge says they negotiated successfully with Indigenous communities. Oh yeah? Then how come 3 Tribes in Minnesota are suing them to stop the pipeline?

Not only is this exactly what climate scientists are warning us must absolutely not happen but it’s ignoring Anishinaabe and Ojibwe Treaty rights, and endangering the tribes wild rice crop as well as their water, some of the only remaining clean, drinkable water in North America. The pipeline would pass beneath 200 bodies of water including the headwaters of the Mississippi. Tar sands is heavy and when it sinks it’s very hard to clean up.

Wild Rice is central to the culture and history of the Indigenous Peoples of northern Minnesota, Wisconsin and Michigan. It’s the only place it grows in the world apart from an area in Canada. This unique rice is also central to their food supply. Running huge pipelines under these lakes of rice is damaging in and of itself, even without leaks. But Enbridge’s pipelines tend to leak. From 1996 until only 2014 they’ve had over 1000 leaks approaching 1 billion gallons of oil!

I know this is long and intense but there are 2 more things I need to say:

1. Enbridge was required by the state of Minnesota to put large sums of money into a special Trust that is meant to cover law enforcement costs related to the pipeline. But what’s happened as a result, is that local sheriffs’ departments are billing the trust for every minute they spend harassing and arresting water protectors. This flow of money has incentivized the police to crackdown on peaceful opponents of the pipeline and bill for it. One woman I spoke with was strip searched while a male cop watched through a crack in the door. Some I spoke with have been put in a cage. Others are crammed into cells, without sufficient protection from COVID.

There are militarized drones buzzing low over protestors houses at 3am. Many have been followed by police and stopped for no reason, their identity information taken. I was followed on two separate occasions and a car in my caravan was stopped on the way to the press conference we were headed to and questioned for a long time before being released. I wondered how much extra money that officer was making from that episode.

But there’s no question that local police are seeing more money than they ever have and they’re being turned into a privatized force working in the pay of a foreign corporation. This is not only a bad idea, it’s illegal and some of the best Constitutional Rights lawyers in the country at the Center for Protest Law and Litigation, are preparing litigation to challenge and end this illegal privatization of public police in what will be a pioneering lawsuit.

2. There are apparently some several 1000 workers mostly from out of state working on Line 3. The climate crisis isn’t their fault. They do some of the most dangerous jobs in industries that fueled this nation’s energy systems for the last 100 years. Along with all the coal, oil and gas workers, we need to thank them for this work and then make absolutely sure that, as the world moves on from fossil fuels because the future depends on it, the workers immediately get union or union equivalent jobs with benefits and bargaining rights.

Fossil fuel stock is plummeting. 1000s of the workers are being laid off. But there are millions of jobs that desperately need doing. Not just in the green, renewable future –which aren’t unionized and that’s something that needs fixing–but our roads and dams and sewage systems and storm systems and water pipes are decaying and, as we just saw in Texas and Mississippi, our utility companies are unable to withstand extreme weather events.

Oil and gas wells need to be remediated. The workers have the skills for this, and the oil companies are supposed to pay for that. Well let’s make them do it before they declare bankruptcy and leave us holding the bag.

Here’s how you can help: 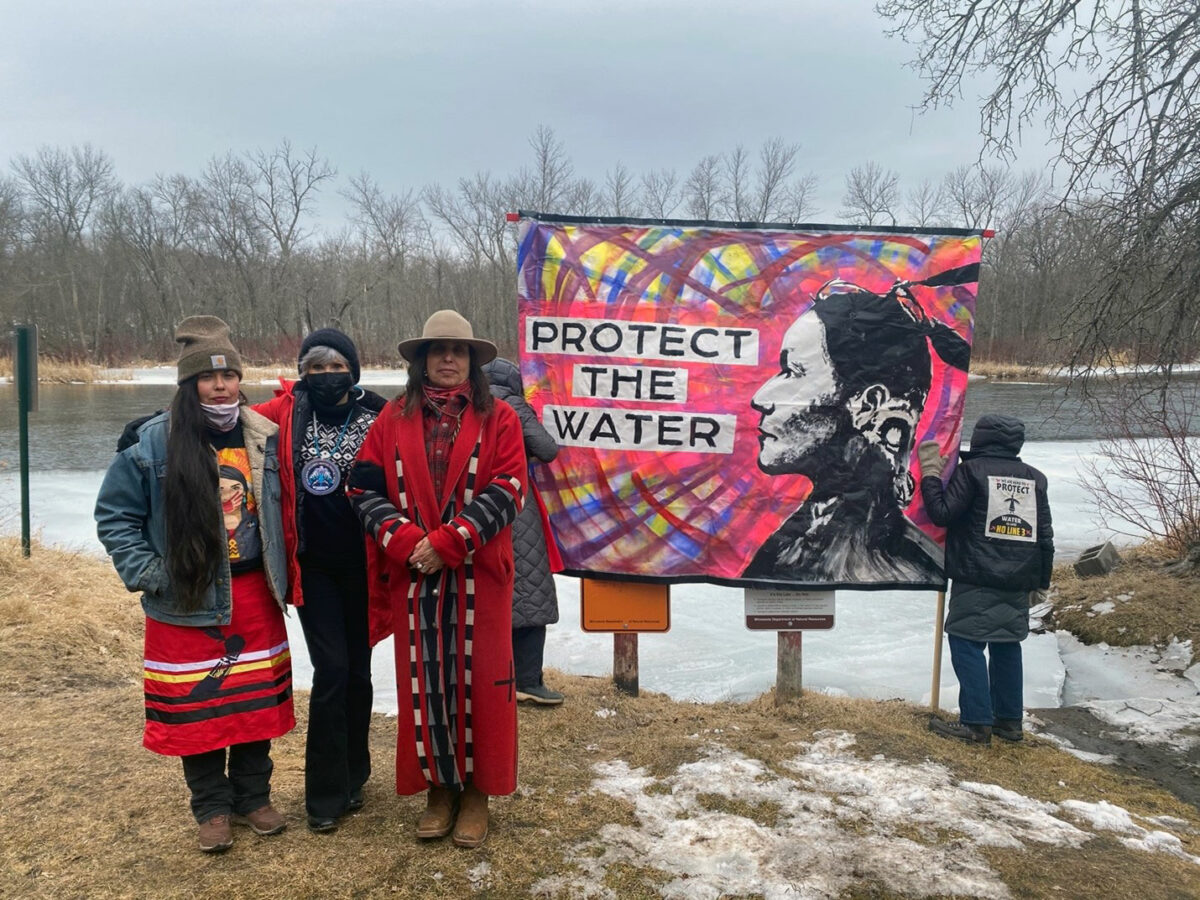 With Tara Houska and Winona LaDuke. The river behind us is just one of the many sacred and beautiful places that will be threatened by Line 3. During the press conference a river otter came up to the bank of the river to watch and show his support.