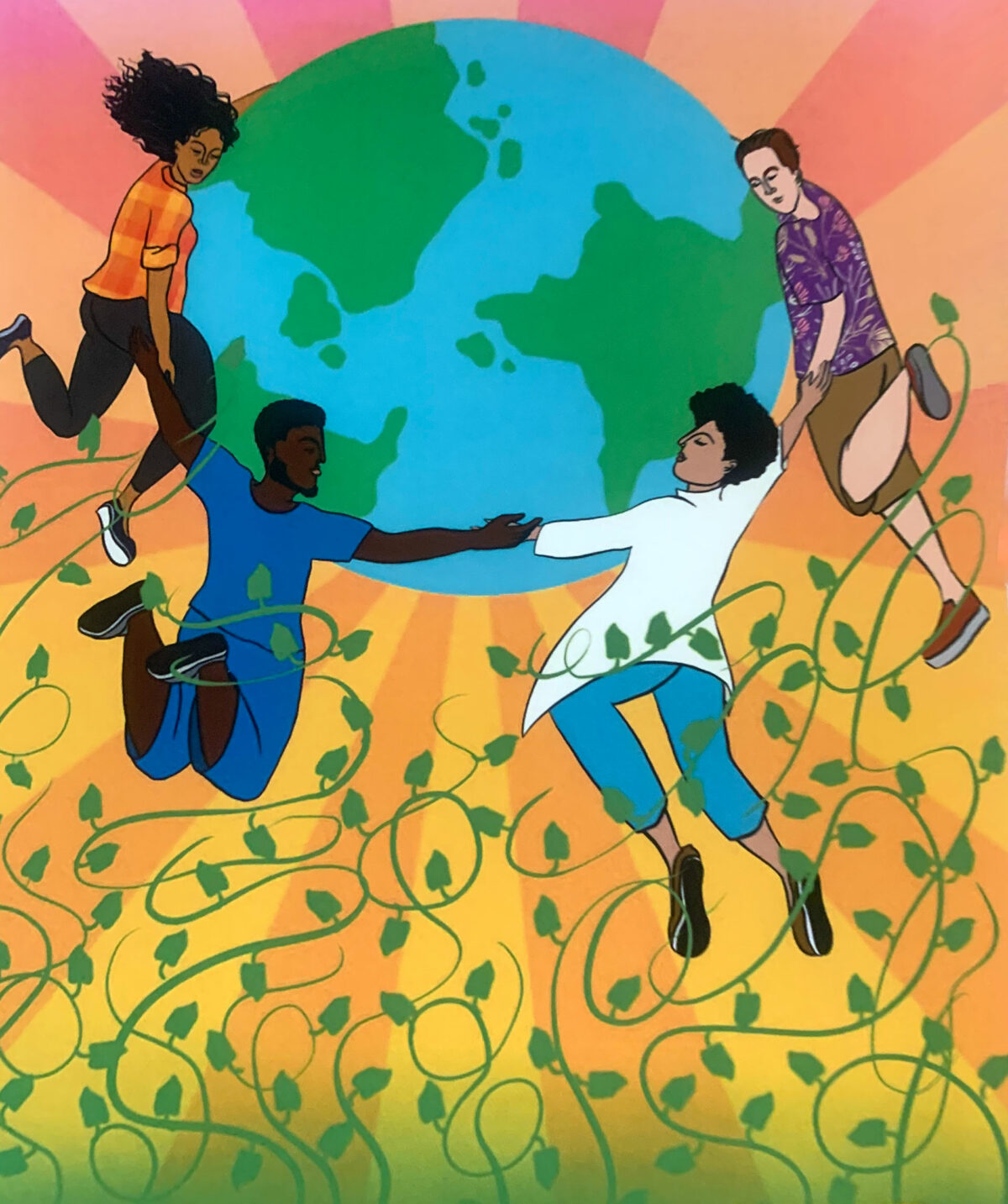 It’s Sunday. The Sunday before the Tuesday election. The election that may well determine the future of the planet and whether or not it will be hospitable for human life. The latter will be challenging whoever wins but with a Biden win, at least there’s an acknowledgement that we face a climate crisis and must act. Biden’s history shows that incrementalism is his comfort zone. It will be up to us, the American people who are honest enough to admit there’s a crisis (and there are 10s of millions of us), to make the new administration understand that it’s too late for incrementalism. And the good news is that Biden can be moved to do what’s right.

If we’d started phasing out fossil fuels 40 years ago when the fossil fuel industry was told by their scientists that what they were burning was warming up the atmosphere, the transition could have been incremental. But the industry lied and planted false stories. As a result, the time remaining to reduce our carbon emissions by 50% –what the scientists are telling us is essential if we are to avoid the tipping point—is growing smaller fast.

I wonder how many of my blog followers will stop reading now. I hope not many. I hope you’ll hang in here cause it’s important if you care anything about saving this precious, complex, perhaps unique, interconnected web of life.

The good news is that many of the steps needed to solve the economic crisis that the covid pandemic has wrought can, if implemented with this intention, move us forward on the path to a green, sustainable future.

I’m scared. I have to confess. And what I do when I feel like this, besides meditate and workout, is I think about the Green New Deal. I learned to do this from Abigail Leedy, an 18-year-old working class climate activist from Philadelphia where people have died because of the heat, gotten sick because of the pollution spewed from the oil refineries next to her house.

Last fall at a Fire Drill Friday, Abigail told the crowd that when she and her friends are feeling the burden of the climate crisis, they raise their spirits by thinking how their world will be under a green new deal. “Under a green new deal maybe kids won’t be poor,” she said. “Under a green new deal all the public schools have air conditioning and we’ll turn gas stations into parks.”
It’s moving to me that we have this 14-page resolution laying out a vision for a 10-year mobilization to save the planet that brings hope to our young people and is, in essence, a major jobs program.
Yet look what a job Republicans (and some Democrats) have already done on the GND, convincing many people that it’s socialism, that it costs too much, will wreck the economy, and can’t be done.

Of course, they conveniently don’t factor in the costs of not doing anything. Get this: Over the last three years, the total cost of extreme billion-dollar weather events exceeded $450 billion!
But the main reason they hate the GND is because it requires a strong government and an economy that actually works for all people. The oligarchs try to sell us a bill of goods about the free market system because they hate regulations that prevent them from running roughshod over workers and the environment in order to maximize their profits. Trump has rolled back over 100 environmental regulations!
And listen to this: The above is the same reason the Trump administration has refused to mount an appropriate federal response to the covid pandemic. They don’t want us to see the government as an institution that actually helps people. They’ve made ‘Big Government’ a bad word but the size of the government isn’t what’s important, it’s who the government works for, right?
Hasn’t covid taught us the importance of a functional federal government? We are right now experiencing the catastrophic impacts of a weakened government that refuses to protect public health and support people in the midst of a global emergency.
Please keep reading. It’s important for us all to understand what the Green New Deal is…and understand that it’s not socialism. 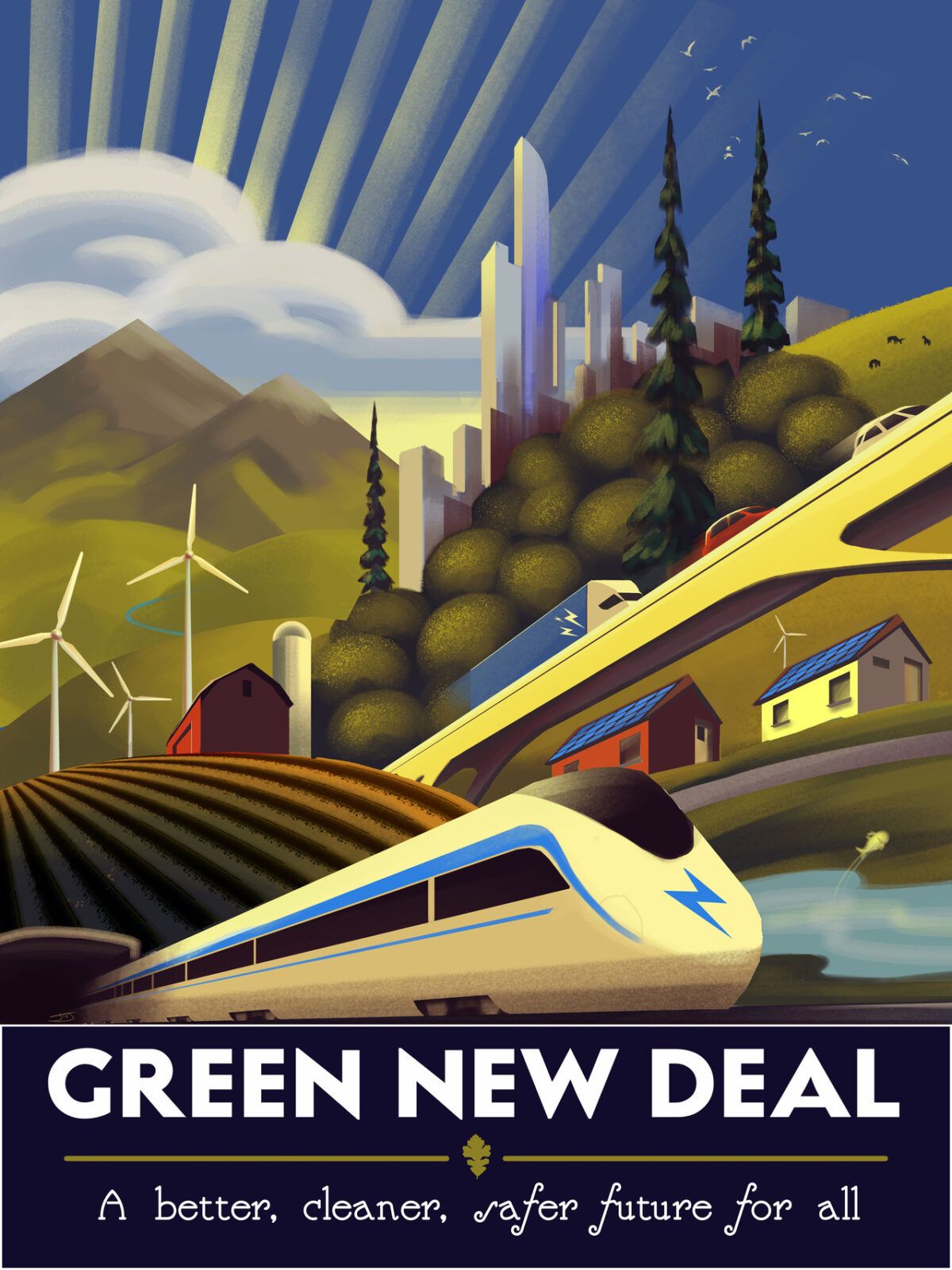 Like the original New Deal in the 1930s under Franklin Delano Roosevelt, it proposes that the government funds many thousands of good-paying jobs, retrofitting and upgrading buildings for maximum energy efficiency, updating our water delivery infrastructure to improve waste quality and conservation, remediating toxic oil wells and waste dumps, and generally increasing this nation’s resiliency, safety, and affordability.

Unlike that original New Deal, the Green New Deal (GND) explicitly calls out and centers the need for these investments to be guided by justice and equity – racial justice, economic justice, gender justice, and environmental justice.
The GND calls for training people in skills that would be in demand in the new economy created by the transition off of fossil fuels and guaranteeing the right of all workers to organize, unionize and collectively bargain. The overseas transfer of jobs and pollution would be stopped.
It calls for guaranteeing family-sustaining wages for workers, good healthcare and retirement benefits. It calls for ensuring workers affected by the transition off fossil fuels will have the resources and skills to succeed in a new economy.
The work would be local, and local communities would be the ones that benefit from these changes. See we need to stop having to move things like water and food and energy to and from faraway places. When you’re relying on sun and wind, communities can own, control and store their own energy. 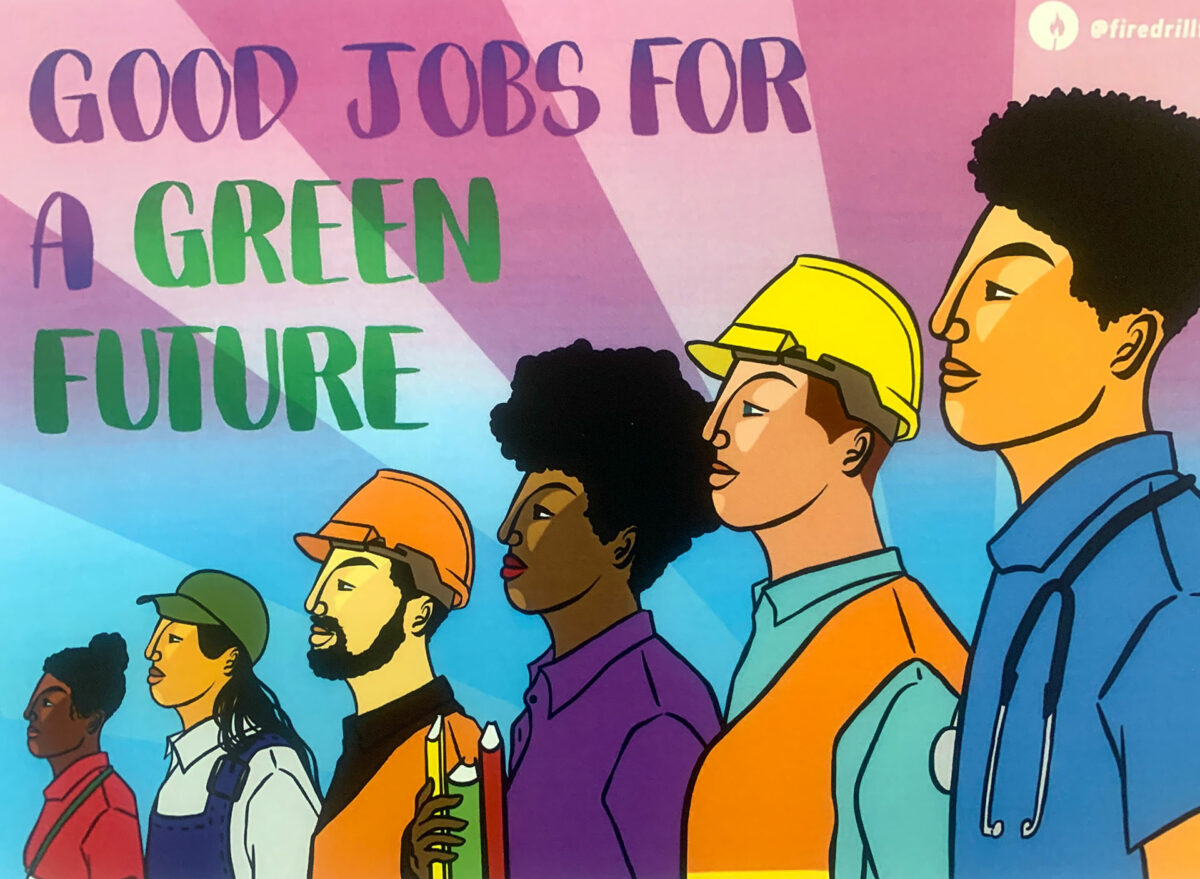 While polluting industries are being phased out, other, sustainable industries will replace them, spurring economic development. Investing in affordable, high-quality healthcare, housing, education, and social services will ensure all of us can thrive.
And the GND isn’t just about urban centers. It calls for supports for family farming, investments in sustainable land use practices, restoring the natural ecosystems through proven low-tech solutions known as restorative agriculture. This would result in our food being far healthier and more nutritious and without the manipulation of big agribusiness.
The genius of the GND is its inclusiveness. It doesn’t just focus on reducing greenhouse gas emissions. Vulnerable communities including indigenous peoples, communities of color, poor and low-income workers, and people who live in rural communities are the primary victims of pollution and resource extraction.
Under the GND they would be the beneficiaries along with workers affected by the transition off fossil fuels.
When Representative Ocasio-Cortez and Senator Markey first introduced the GND Resolution, I have to admit that I was one of those who thought, “Oh Lord, why not just focus on climate? Why include equality and justice issues?

But I have come to understand that environmental bills that didn’t have justice at their center have invariably failed in Congress, not just because conservative Republicans opposed them, but because they didn’t get support from the working families, unions, young people, and communities of color whose support is vital to getting things done in Washington.
And it’s not just about politics. We truly can’t address the climate crisis separately from the other issues we face like economic inequality and racism. Black, Brown, and Indigenous communities bare the largest burden of pollution.
Millions of people are unemployed or working 2 or 3 jobs just to get by.
One thing that was so game-changing about last year’s enormous, global uprisings by student climate activists was that the youth get it, they understand the need for inclusivity and justice. They get that that’s how we will build a movement big enough to win and ensure we leave no one behind.
They’re right: To make the Green New Deal a reality, we need the broadest possible cross section of Americans to understand that they would benefit from what will be true systemic change.
We all need to understand that what science calls for, cutting carbon emissions in half by 2030 and then weaning entirely off fossil fuels by 2050, is the greatest challenge humankind has ever faced and the opposition is powerful which is one reason why this Tuesday’s election is so critical.
Let’s vote for a government that’s willing to mobilize trillions of dollars, putting people back to work in good union jobs, building a resilient, green economy, protecting peoples’ right to energy-efficient, safe housing and healthy water.
And let’s not fall for the lies of the climate deniers, climate delayers and people who only care about their own wealth.

Thanks to all who read this to the end.