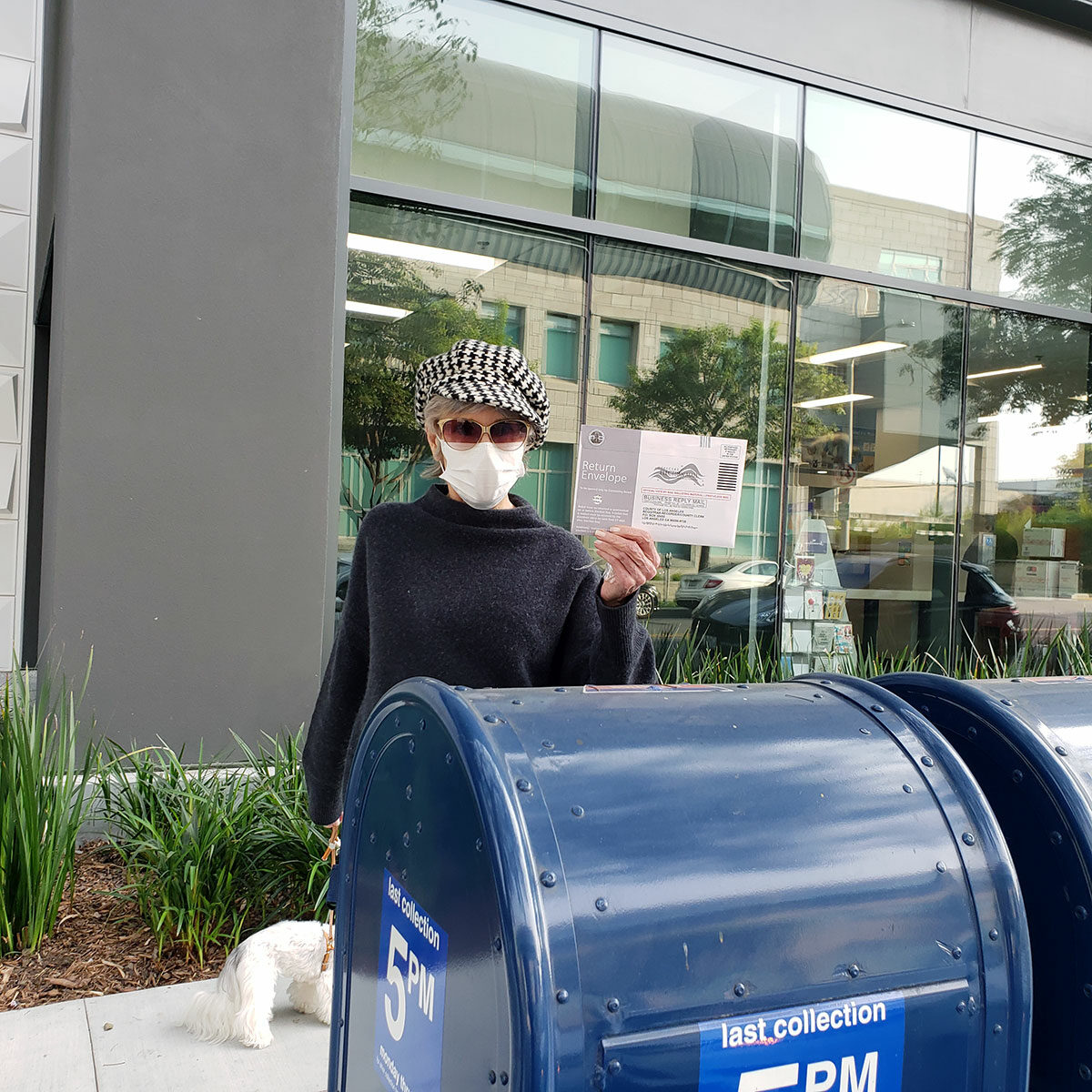 I went to the post office with Tulea several days ago to mail my ballot. And yesterday, having tracked it, I was told it had arrived and been counted!

And speaking of voting, let me tell you this good news I just read:
More than 22 million Americans have already cast ballots in the 2020 election a record-shattering avalanche of early votes driven both by Democratic enthusiasm and a pandemic that has transformed the way the nation votes. The 22.2 million ballots submitted as of Friday night represents 16% of all the votes cast in the 2016 presidential election, even as eight states are not yet reporting their totals and voters still have more than two weeks to cast ballots. Americans’ rush to vote is leading election experts to predict that a record 150 million votes may be cast and turnout rates could be higher than in any presidential election since 1908.

But I know I’m not the only one feeling on pins and needles. I know that for many, this is a difficult time. There’s so much up in the air both with the pandemic and with the election. And Stacey from Green Bay, Wisconsin, who follows my blog, just wrote, “We have had 45 shootings since January. That is a lot for Green Bay. We had 8 shootings in 5 days. The police told us to stay inside! People are randomly shooting at cars and apt buildings. My anxiety is through the roof!” And she also says few people there are wearing masks. I hear you, Stacey. We have to make sure that Biden/Harris are elected and that, given some time and respite from the hate mongering and divisiveness the welcome mat will be pulled back from the militias and the selfishness and irresponsibility of the anti-maskers will be better understood.

My belief is that if Biden wins and is brave and bold (we have to make sure he will be), he can bring enough good jobs and pay proper attention to working people in the middle of the country who have been ignored and left behind by previous elected officials (of both parties). That may be a step forward in quieting the anger that’s been erupting in places where militias exist, ease the despair that fuels the opioid pandemic and begin to address the underlying causes of police violence.

Again, history is useful: in the 1930s, there was a lot of hate and vitriol against FDR but he spent large sums of money to help those who hated him..rural folks, farmers, desperate workers, and things calmed down. The oligarchs kept up their attacks but the important majority were won over.

Between now and then, let’s vote, let’s volunteer for organizations like Greenpeace and Fire Drill Fridays and MoveOn and Indivisible to help get out the vote and then, if we prevail, demand that the new president does what’s needed.

But let’s also take deep breaths, listen to calming music, watch TV shows that don’t increase our anxiety, talk to friends who feel the same, try meditating. There are apps to help with that. Seriously, being intentional in doing things that calm you is important for your health. Anxiety and anger produces cortisol, a primary stress hormone, that is bad for blood pressure, your heart and your brain. A walk in nature is always calming. Actually, walking in and if itself is good for quieting things down.

It calms me down to pay attention to my squirrels. There are 2 of them now and one actually took a peanut out of my outstretched hand yesterday. Birds are coming around now for the food and the bird bath. Sparrows and finches mostly. I’m in the middle of a city and I have no garden but I’ve created a little nature preserve in front of my home that’s the size of a postage stamp but it’s enough.