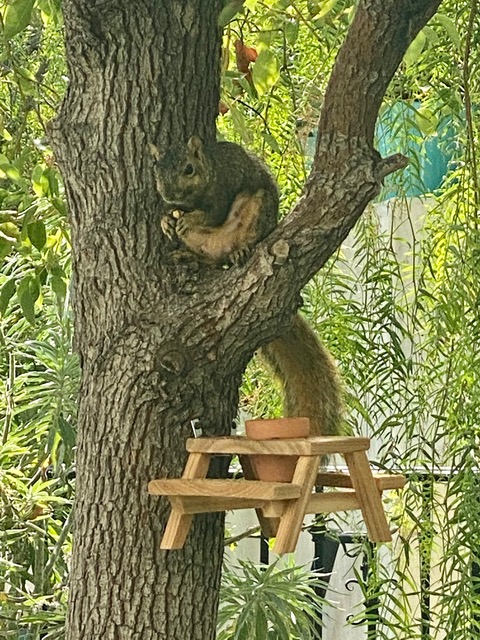 Since my last squirrel posting, I got a “picnic table” for the squirrel and attached it to a tree in front of my house. It’s 12:30pm and I’ve already filled the little pot 3 times. Maybe there are a lot of squirrels and I just choose to think it’s one squirrel…my squirrel. A girl squirrel. But if that’s the case she’s on track to become a very plump squirrel. My social media followers tell me squirrels hide and/or bury the nuts. She must do it very fast. I went to the gym to workout, filling the pot right before that. When I came back an hour later the pot was empty. My neighbor, the artist Joan Scheibel, took this picture while I was working out.

Just out of sight I recently hung a hummingbird feeder. I think there’s only one humming bird drinking from it but maybe that’s because it’s no longer hummingbird season. I know i’ll get a lot of opinions about this very soon.

Birds are needing our help. Last week I read an article in the Guardian entitled, “Birds Falling Out of the Sky in mass die-off in south-western U.S.” Swallows, flycatchers, warblers…maybe 100s of 1000s dead already. Turns out, because of climate change they were migrating early from Alaska and Canada to Central and South America before they had a chance to build up their normal pre-migration fat reserves. Normally their migration route takes them over the resource-rich coastal areas but the fires there forced them inland over the Chihuahuan desert where drought has killed off insects and dried up the water. Biologists say the bird carcasses they examined show no body fat. The birds may have starved to death or smoke from the fires may have damaged their lungs.

Climate change, you see, has damaged the Alaskan tundra where they breed and destruction of the rainforests in central and south America is damaging their winter habitat. As I have mentioned previously on this show, there are already close to 3 billion fewer birds in North America than there were in 1970.

Because their lungs are so fragile, birds are early warning signals for the rest of us. ‘Canaries in the coal mine.” So are the great white sharks that are suddenly appearing in the Bay area, far north of their normal range, because of warming ocean. How birds and fish are behaving as their environment changes is telling us something about the future:

Global warming isn’t a faraway phenomenon in the global south or a somewhere- in-the-future crisis that will be a problem for our great grandchildren. It’s right here. Right now.

My friend, Iain Armitage, star of “Young Shelton,” has hamsters and saw my posts about my neighboring squirrel and sent me this little “movie” which I find fun and interesting. So I’m sharing.