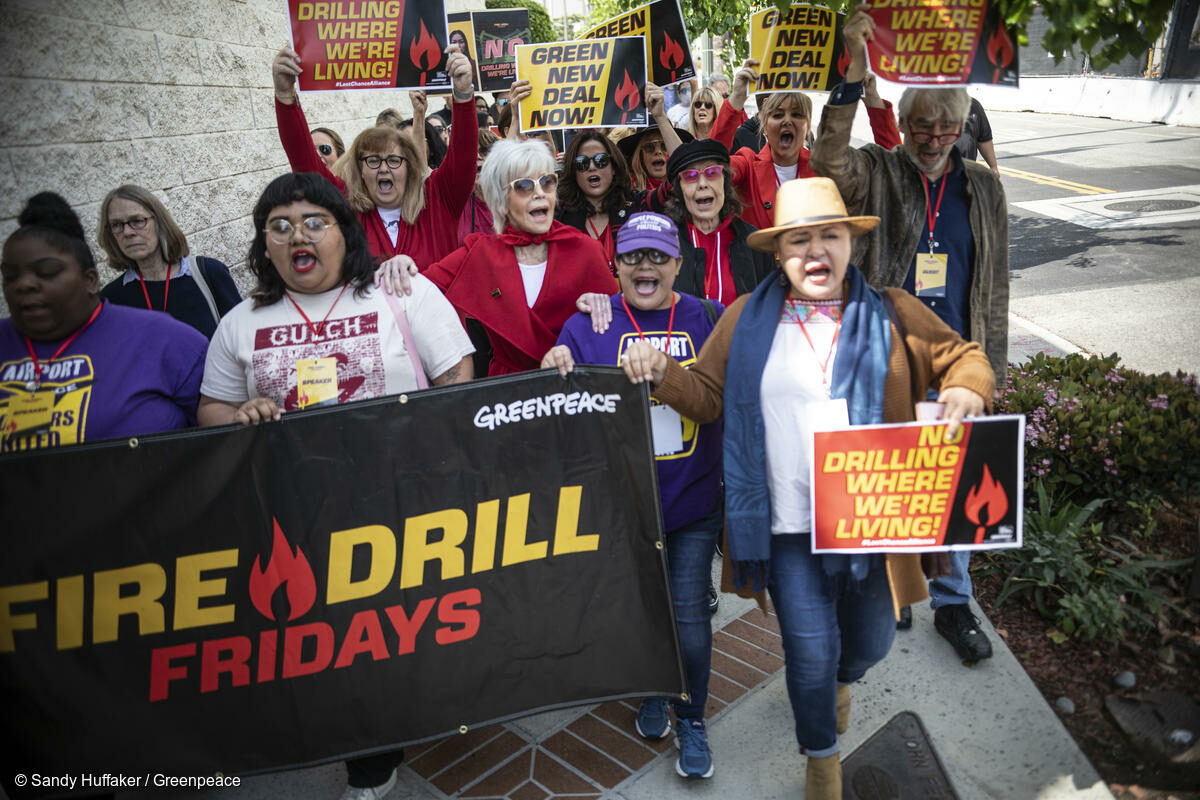 Friday we held a very successful and large Fire Drill Friday in San Pedro, an hour south of Los Angeles and one of the nation’s largest ports and oil refinery complex, where oil is exported to other parts of the world. We wanted to confront the immense, destructive power of the fossil fuel industry. Here in California, oil companies have been allowed to drill at will for nearly 150 years, fueling the climate crisis, and also a health and an environmental justice crisis from the production of their dirty product.

Many celebrity friends joined the rally and there was a lot of press covering it. It was especially gratifying to have labor represented. 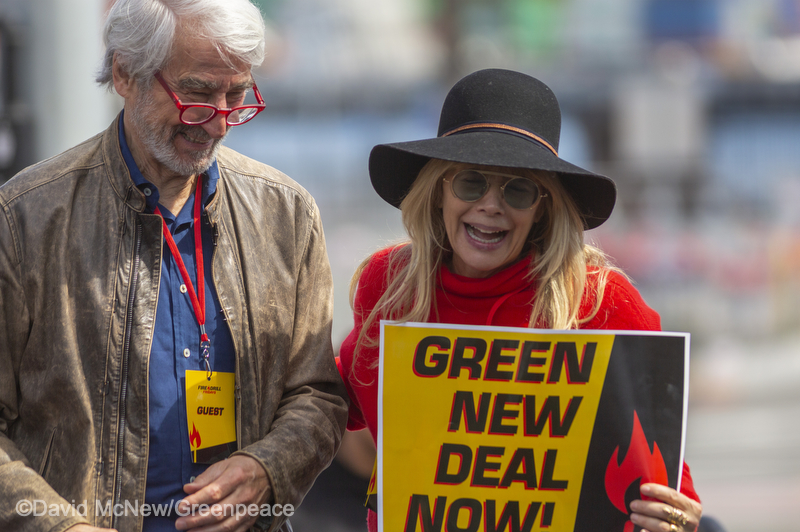 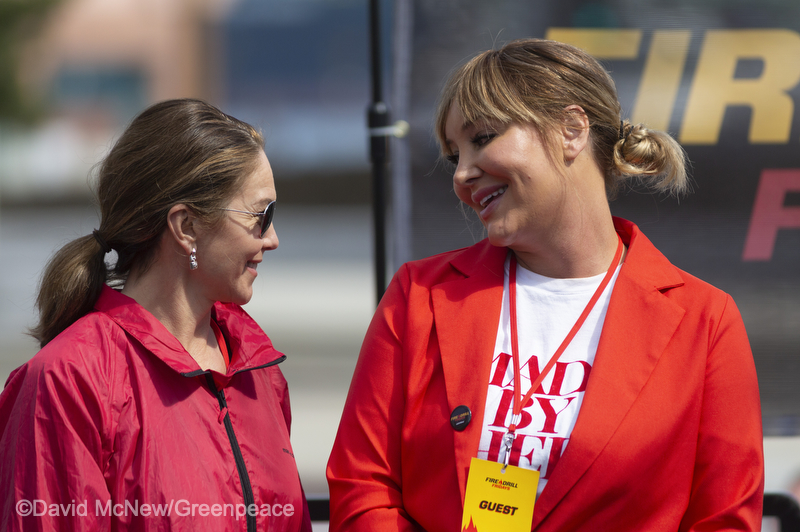 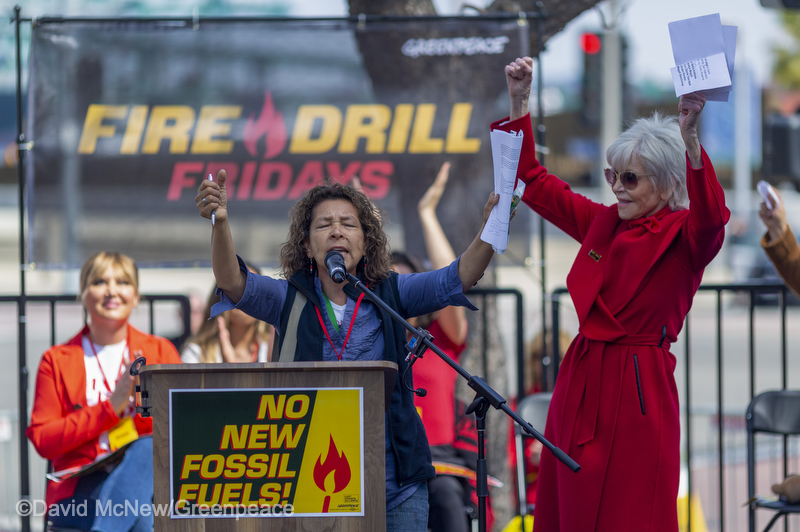 That morning, Communities for a Better Environment and the Stand LA Coalition delivered a letter from them and me to City Councilman Buscaino from me letting him know that we hold him accountable for the devastating health impact on the city of Wilmington due to the fact that oil wells are drilling in people’s back yards, next to schools, playgrounds and health clinics. For generations, residents have suffered headaches, nosebleeds, and nausea in the short-term. In the longer term, exposure to many of the chemicals like benzene causes cancer, birth defects, and other devastating harm.

Councilman Buscaino receives 100s of thousands of dollars from the fossil fuel industry and we demanded during the rally right next to his office building that he pay more attention to his constituents and less to the industry. For the first time ever, he sent a message saying he would meet with representatives from the organizations. He will be up for re-election next year and, if he doesn’t act to stop the drilling in Wilmington, we will make sure he is ousted. 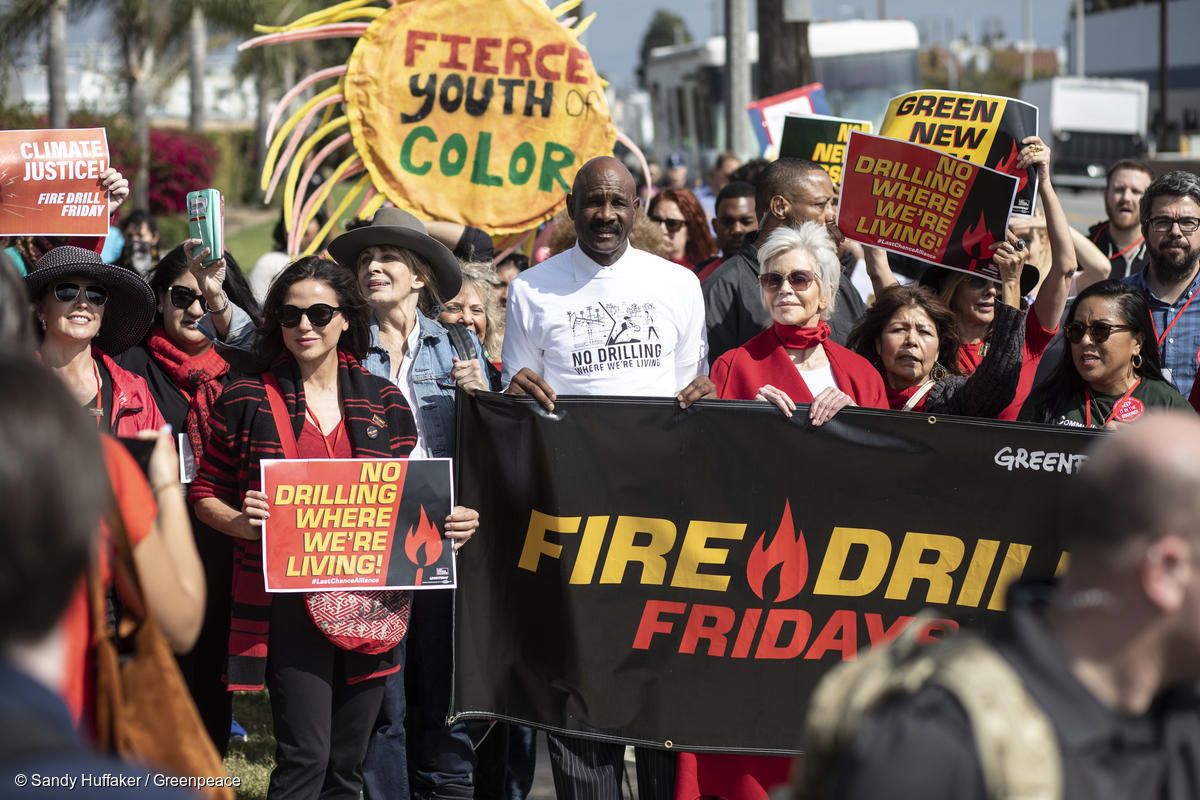 Here, we are marching to the site of the civil disobedience 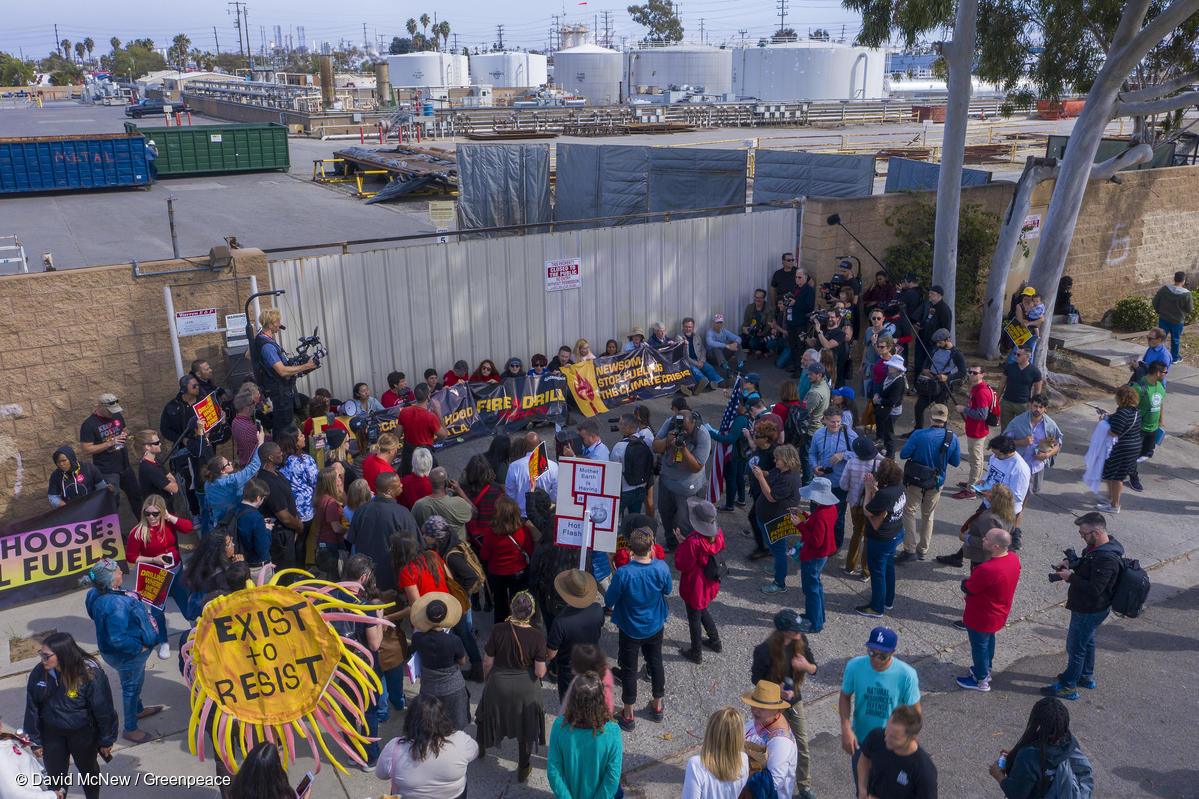 Demonstrating outside the Warren Energy and Power oil extraction site

After the rally, the biggest in memory we were told, we toured neighborhoods in Wilmington. We saw pumps and transfer facilities literally feet from bedroom windows. Then we walked around one of the facilities – again right in a neighborhood – and our throats burned and the air smelled of something metallic. And families are unable to sell their homes and buy anything comparable in CA. After that march, we gathered outside the entrance to a large transfer facility and a group of people engaged in civil disobedience by sitting down and blocking the gate. There were police all around plus a drone and a police helicopter but there were no arrests. 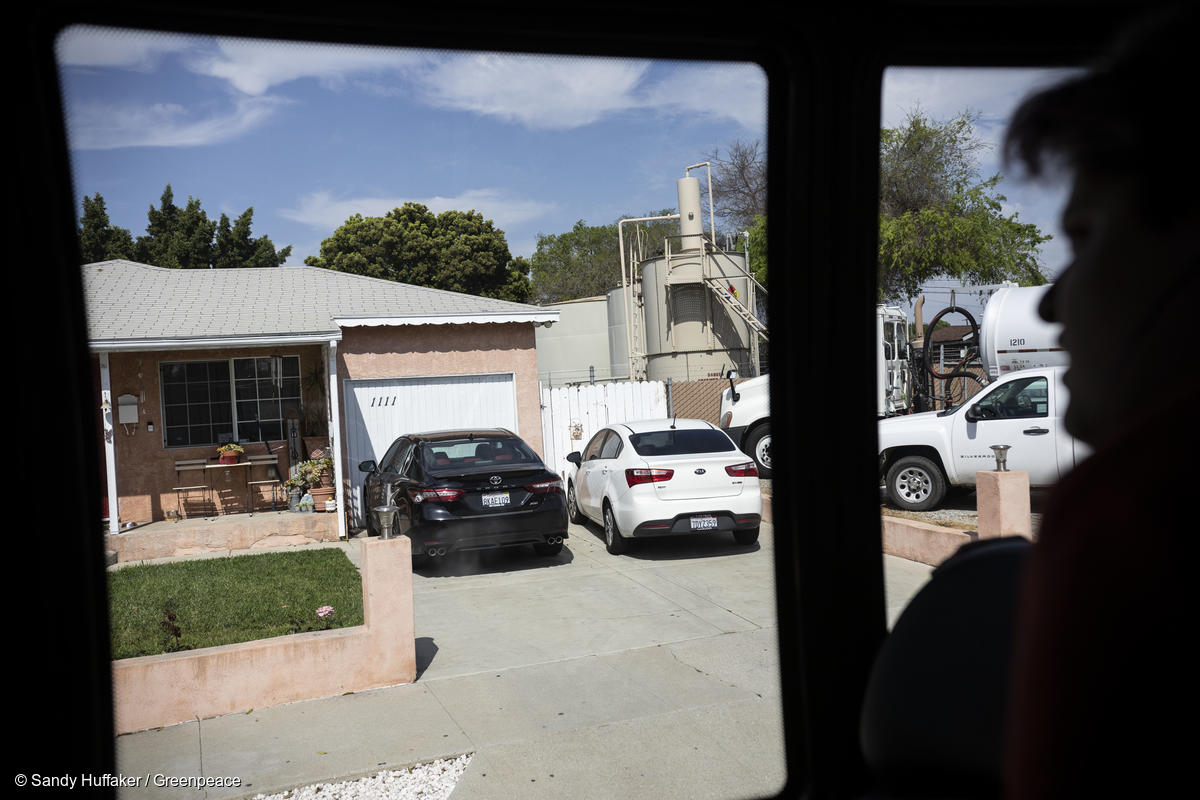 Oil wells next to people’s homes in Wilmington, Los Angeles 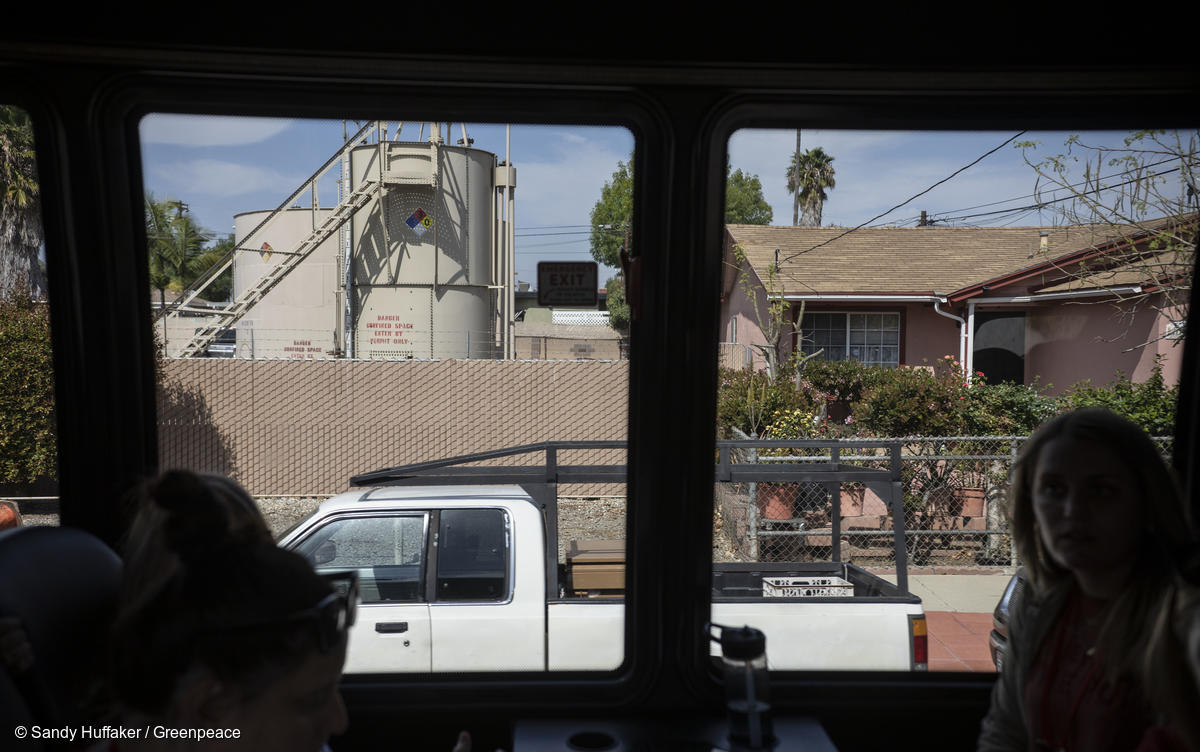 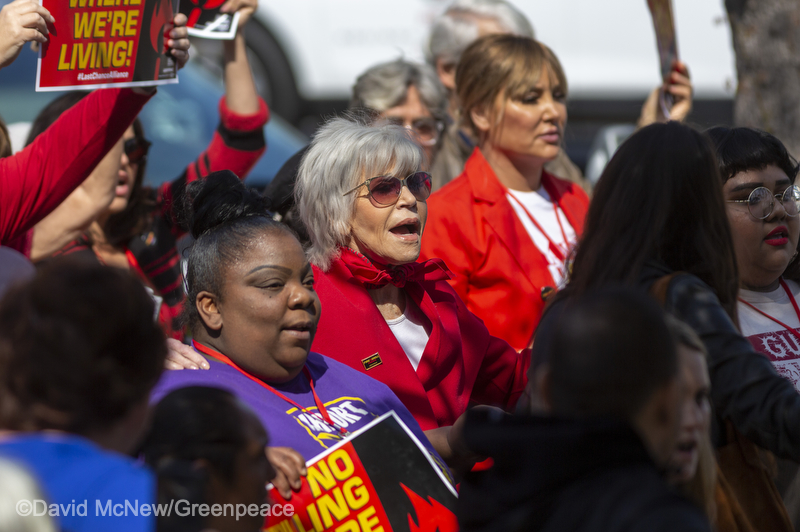 Marching with trans actor, Billie Lee on my left and on my right Jovan Houston 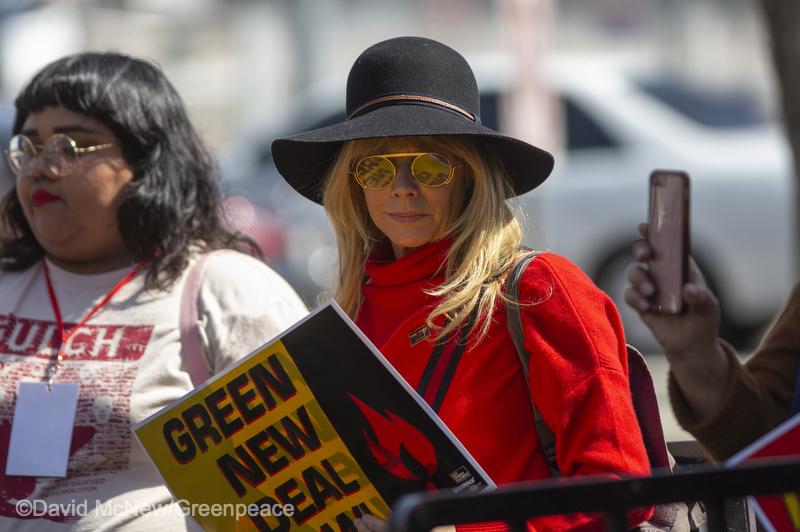 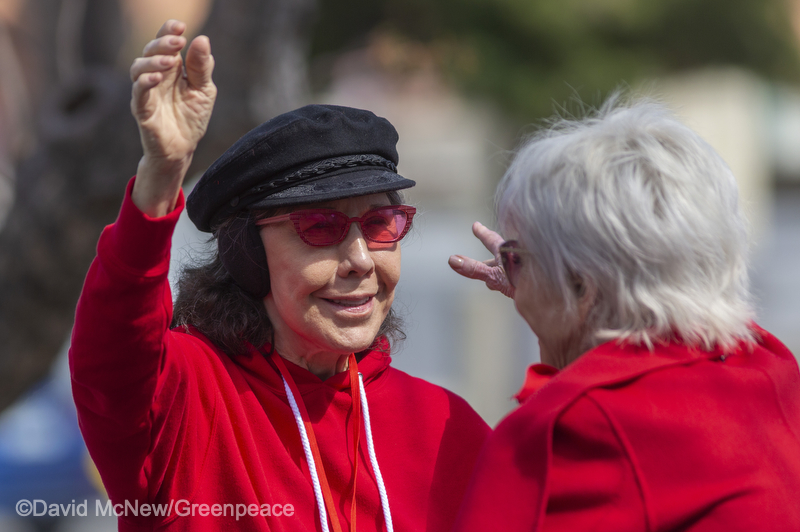 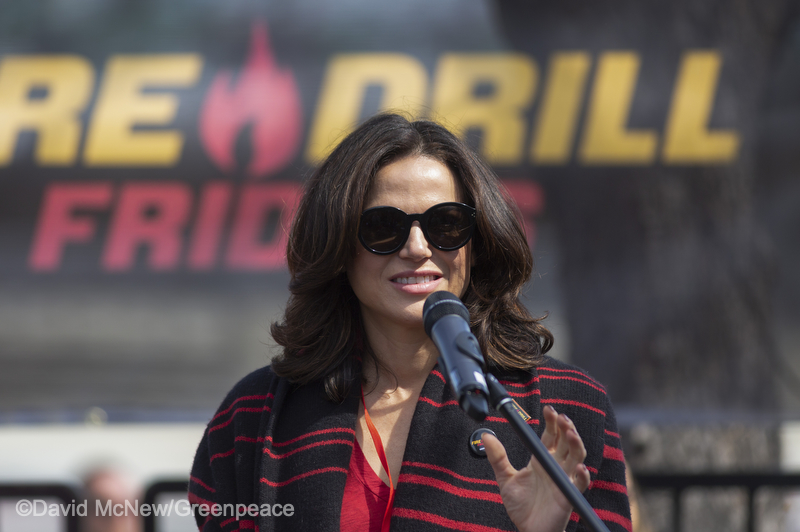 We’re going to be holding a Fire Drill Friday every month, demanding that Governor Gavin Newson and City Councils and mayors in California stop any new fossil fuel drilling, begin to plan a phase out that includes a Just Transition for fossil fuel workers and communities hit the hardest and institutes a 2,500 ft Health and Safety buffer zone between oil wells, fracking pits and refineries and where people live, work, play and worship. And we’ll keep it up till they do.