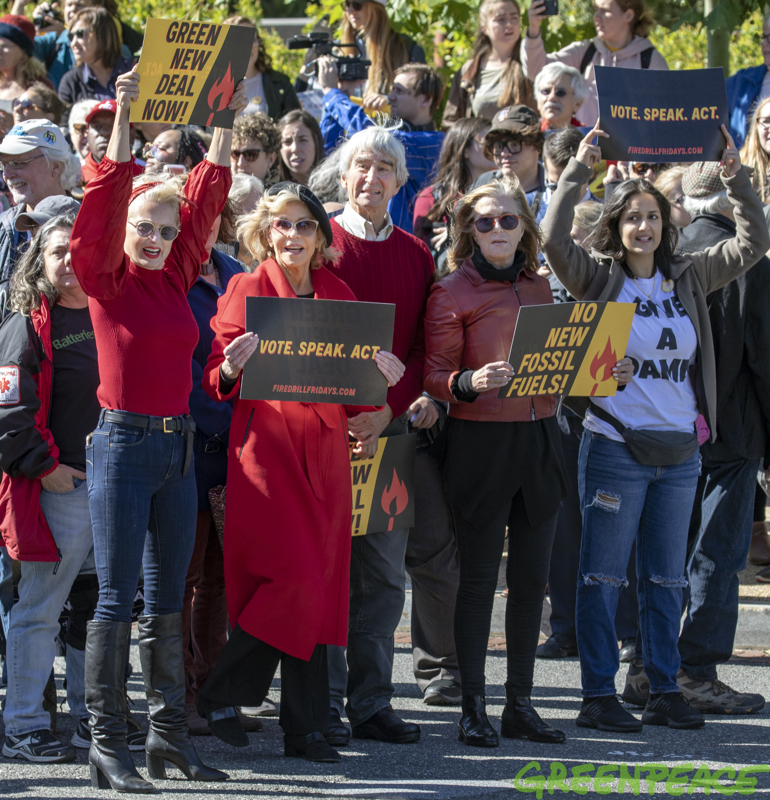 It was a successful action last Friday. The crowd was bigger, there was more press covering it and spirits were high. Press is important because that’s how to get the word out: “Wake up folks. The house is on fire. We gotta come together to put it out.” It’s good to know that people are talking about this all over the world because it’s a global crisis 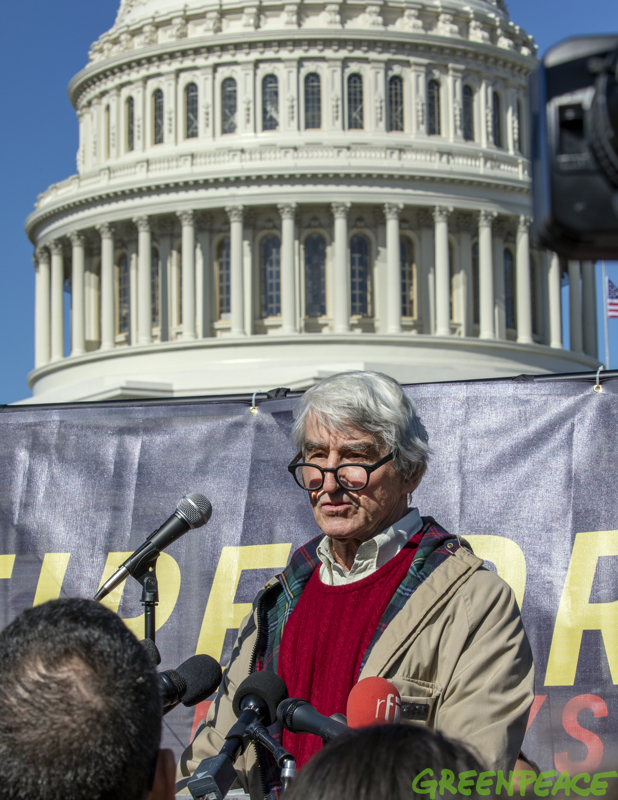 The wonderful Sam Waterston joined me. This was special because Sam is essentially a centrist, not given to speaking at such rallies or getting arrested. But he was there and most articulate in expressing how, while he might not agree with every aspect of the Green New Deal, he sees it as a framework for solutions on the scale and depth commensurate with the catastrophe we’re facing. He understands we are in the midst of an unprecedented crisis and that now is the time for everyone, including centrists, to join together to make the necessary changes. 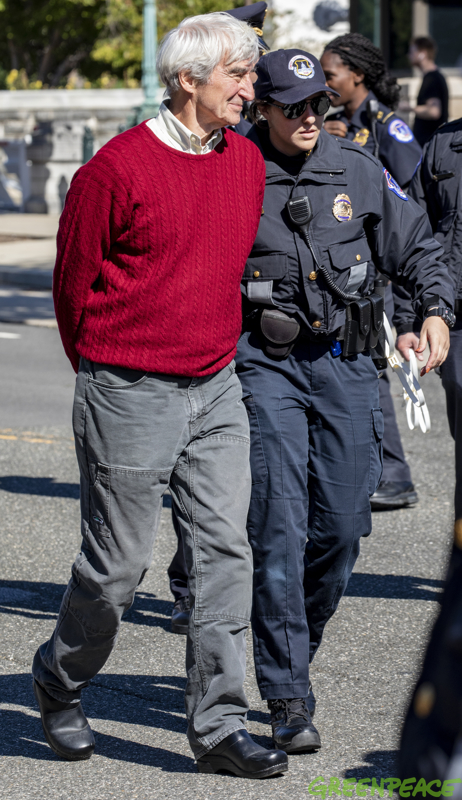 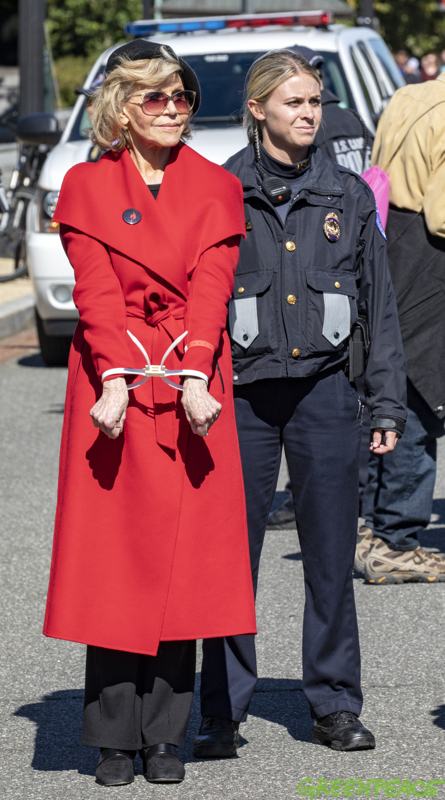 There were also diverse younger speakers who spoke to how the Green New Deal is the way forward that we must support with everything we have.

The Green New Deal isn’t a policy, it’s a framework for weaning ourselves off fossil fuel by mid-century in a just and equitable way, leaving no one behind. Really smart people are at work developing policies called for in the Green New deal that can be enacted in a new president’s first 100 days just like Franklin D. Roosevelt did in 1933 when he enacted the New Deal. This lifted the country out of despair during the Great Depression, put 10s of millions back to work and brought us so many programs we benefit from today such as Social Security.

Yes, The Green New Deal will be a huge, disruptive, super ambitious undertaking and yes, it will cost a whole lot of money. But the cost of inaction is huge. Over the last 3 years, the total cost of billion-dollar weather and climate events exceeded $450 billion! And it’s going to get worse. But, listen, this country has been here before… during the 1930s depression. We marshaled the needed resources then and we can do it again. 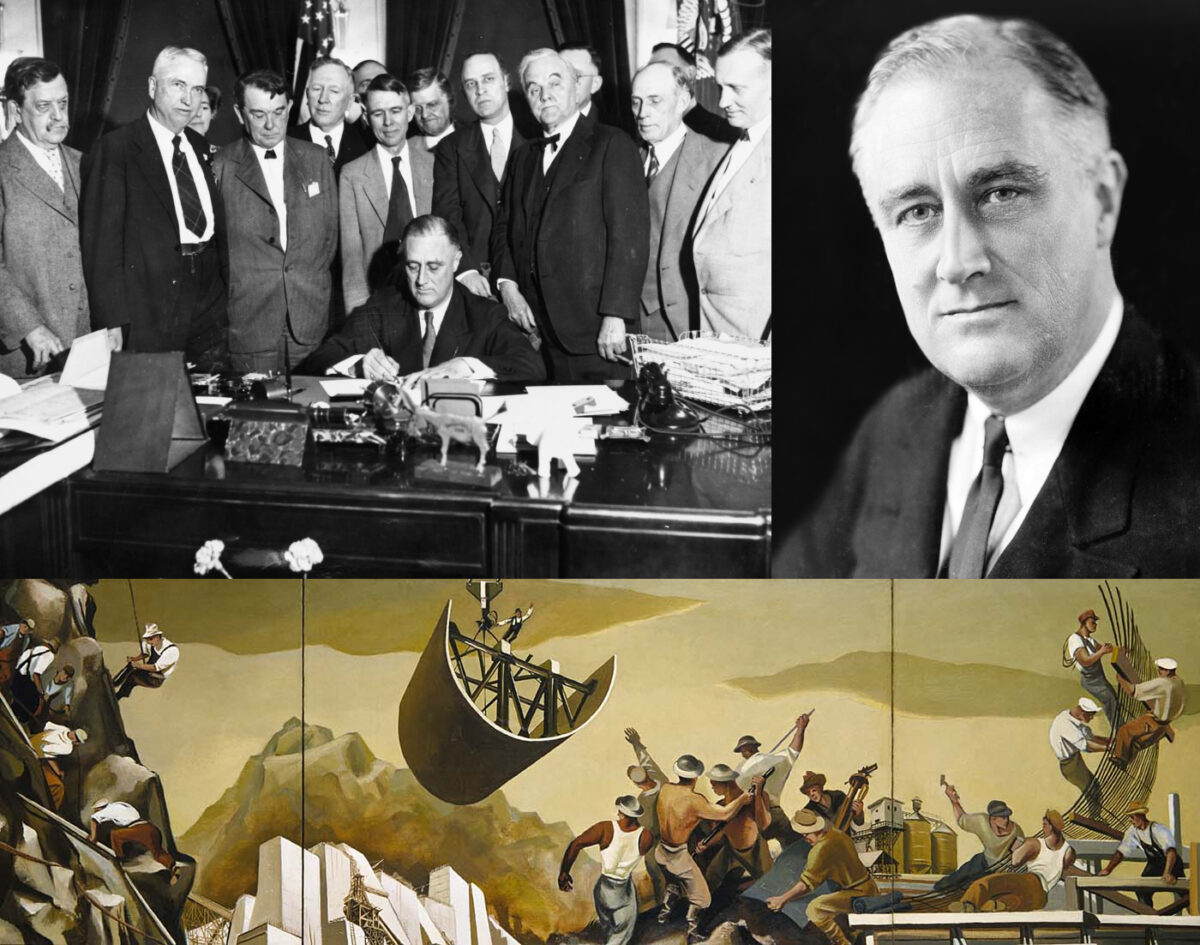 The rich and powerful hated the New Deal because it set a precedent for the federal government to play a central role in the economic and social affairs of the nation. It was criticized as fascist or socialist, bankers tried to overthrow Roosevelt. Big banks, big railroads, big money ranted and raved and even tried to overthrow Roosevelt. But he succeeded because his programs worked.

The New Deal wasn’t perfect. It largely left out Blacks and women. The Green New Deal aims to enable an equally grand series of local, state and federal interventions that will turn back climate catastrophe but without leaving anyone behind, including the people and communities who depend on fossil fuel -related jobs and the frontline communities that have been most impacted by the fossil fuel industry and climate change.

The same interests that hated the New Deal are the ones today telling us that the Green New Deal is bad, that Big Government is bad, and they’ve convinced a lot of people of this, the very people who are actually hurt because government is being shrunk and taken over by Big Business.

Republicans and some Democrats will say the Green New Deal is ridiculous, utter fantasy, too expensive. But given the emergency, it is those who believe in business as usual and moderation who are truly delusional.

The fact is, the policies proposed by the Green New Deal are in line with what the American people have done before… because there was no choice.

There is no choice now. Scientists tell us the tipping point for catastrophe is only 11 years off.