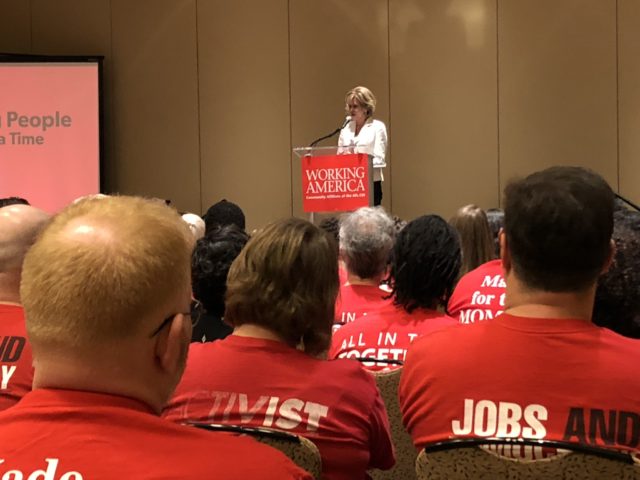 My last blog had #1 Why I haven’t been blogging and #2 was about laughter. This blog starts with #3: ACTIVISM. It’s been awhile since I wrote about what I’m focusing on in these rough times. But in addition to what’s below, I am a board member of the Georgia Campaign for Adolescent Power & Potential which I founded 24 years ago. It is a state-wide non-profit which focuses on adolescent reproductive health, comprehensive sexuality education, teen pregnancy prevention and health and fitness. I am very proud of the work we do in Georgia and I continue to be involved though from afar. Our big annual fundraiser this year will be Nov 14th in Atlanta and will feature Sheryl Crow performing and Sara Blakely, Founder of SPANX, interviewing me. Fun!!!

I am also co-founder with Gloria Steinem and Robin Morgan of The Women’s Media Center whose mission is to amplify women’s voices in the media. I encourage you to go onto our remarkable website to learn more.
Because of the times we are in, I’m spending more time on the ground with these organizations:

3. My Activism. I’m on the board of the Working America Education Fund board. WA is the biggest canvassing operation organizing in working class communities year-round since 2003 when it was founded by Karen Nussbaum. FYI, back in the ‘70s, Karen was the founder of 9to5: The National Association of Women Office Workers who inspired me to make the film “9 to 5.”

The fact that WA is ‘year-round’ is key. It’s one reason why, according to independent analysts, Working America is 2 to 3 times more effective than the standard canvass in winning votes. Their trained canvassers don’t just show up during the election cycle and push a particular candidate. They become ‘trusted messengers.’ The people they talk to become WA members and get information they don’t get from Fox News, which is their primary source of information otherwise. 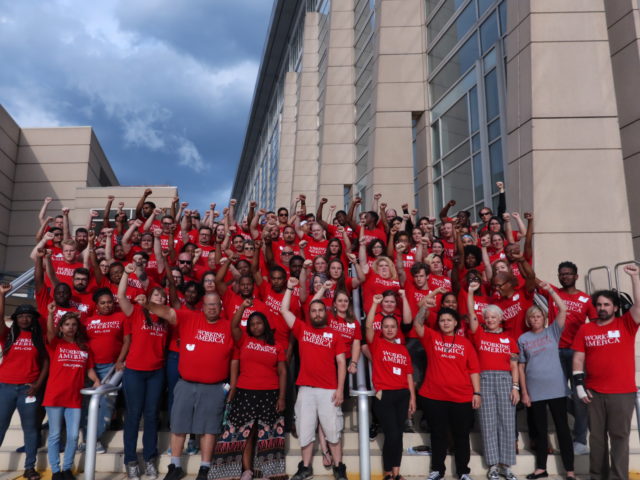 Here are some of the WA canvassers at their annual gathering in Chicago.

Working America will be focusing on 10 states.  Kentucky and Virginia are bell-weather 2019 elections — and campaigning in Kentucky allows us to hold Mitch McConnell accountable and challenge his re-election in 2020.  Another 8 states are presidential battlegrounds, including Ohio, Pennsylvania, Michigan and Arizona. This year, after Grace & Frankie’s 6th season is done shooting and I’ve recovered from my 2nd knee replacement surgery in July, I will be canvassing with Working America. 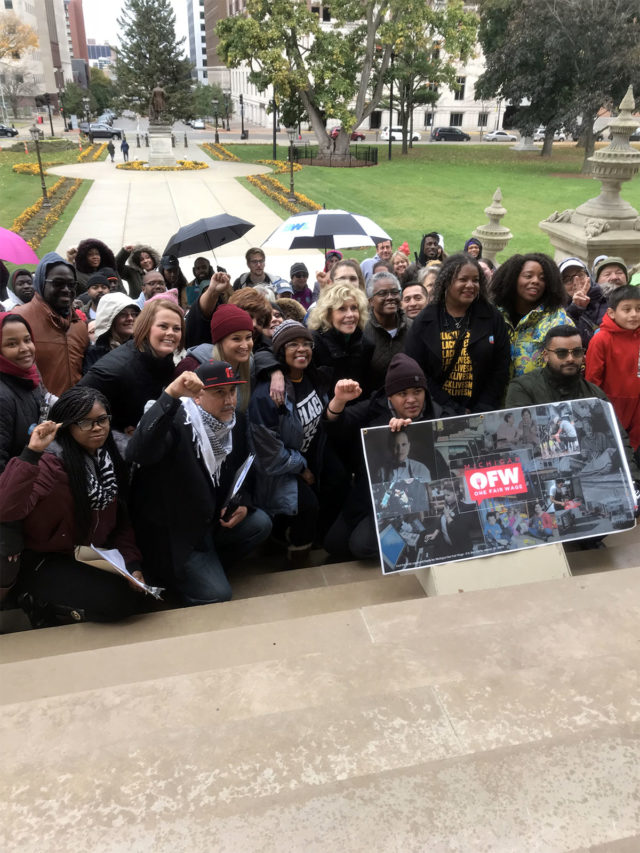 Here I am with a group of ROC canvassers in front of the Michigan capital in Lansing, MI, last November, fighting for One Fair Wage.

I’m also on the board of ROC Action (Restaurant Opportunities Centers Action) which is fighting for One Fair Wage so that all tipped workers (the majority of whom are women) earn at least the minimum wage PLUS their tips. Right now, due to lobbying by the restaurant industry—ironically the NRA, the National Restaurant Assoc–the federally mandated salary for restaurant workers has been frozen at $2.13 for 28 years!!!!! which means that besides often having to work multiple jobs just to support themselves and their families, the nation’s 13 million plus restaurant workers have to put up with patrons who may grope them, pinch them, insult them because they are TOTALLY dependent on the tips for their survival. In the 7 states (CA, WA, OR, NEV, MINN, WISC and Alaska) that do not have a two-tiered wage, sexual harassment and poverty have been cut by 50%! And in those states the restaurant business is thriving, something the NRA doesn’t want you to know. 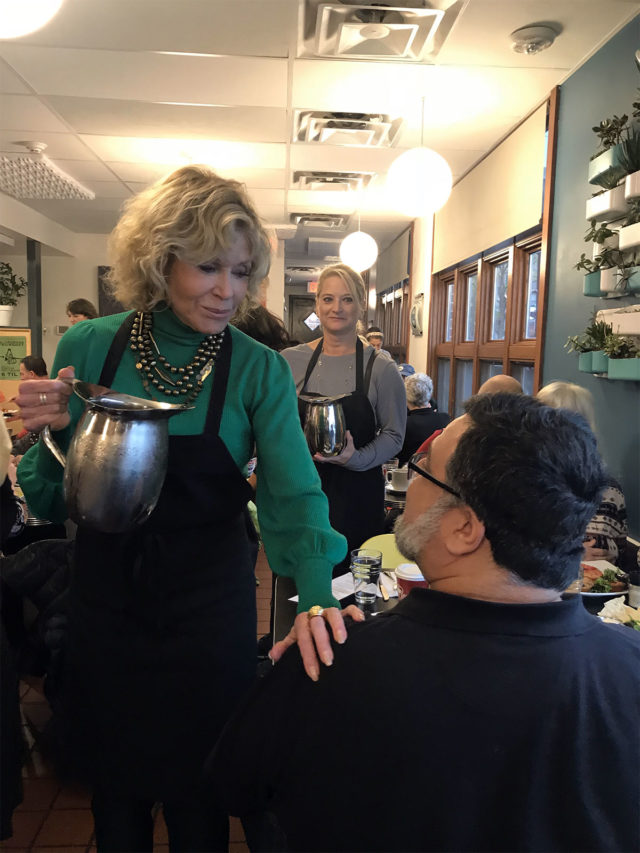 Here I am, being a waitress for a day in Lansing, MI. This was an effort to get press coverage for the One Fair Wage ballot measure.

We spend more time worrying if the chicken we ordered is organic than about the human being who is serving us. Big chains like Applelbee’s, Dennys and The Olive Garden are among the worst offenders. The One Fair Wage campaign is moving in Congress and in New York, Vermont, Pennsylvania, and Illinois; if you live in one of those states write your state representative, and if you don’t, please write your federal representative and demand they support the effort. 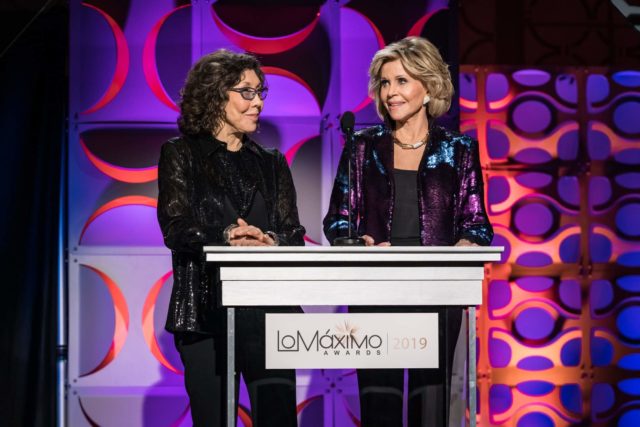 Then there’s Homeboy Industries, the largest gang intervention, rehab and re-entry program on the planet. It was founded 30 years ago by Father Greg Boyle and some 8000 formerly incarcerated women and men come through their doors annually seeking to enroll in one or more of their services which include mental health, legal services, anger management, tattoo removal and, most importantly, to receive unconditional love. For those who are ready to become trainees in their 18-month program, there are jobs with benefits at the renown Homeboy Bakery, Homegirl Café, Homeboy Recycling, etc. Anyone who knows Homeboy Industries comes away knowing viscerally what could happen if we invested in people, rather than incarcerate our way out of things.

Lily Tomlin and I co-hosted Homeboy Industries large annual fundraiser, Lo Maximo, this year. It was wildly successful and very moving. So as to get a true sense of the Homeboy vibe, Lily and I worked for a while in their bakery being mentored in the making of croissants by 2 former rival gang members. In the past, these guys would just as soon have shot each other. Now they’re baking bread side-by-side.

Lily Tomlin and Jane Fonda at the Homeboy Bakery

I am on the board of Homeboy Industries, the largest reentry and rehabilitation program for formally incarcerated men and women in the world. You can learn more about Homeboy Industries here: https://homeboyindustries.org/donate/donate-online/Lily Tomlin and I recently worked in their famous Homeboy Bakery where 2 former gang members taught us to make croissants.Here’s the video of our bakery experience:

Here is the video that was made of our bakery experience. 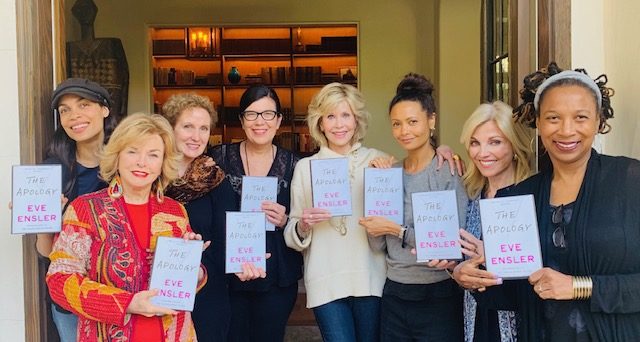 #4. Special Things Over the Last Few Months: In my last blog you saw a photo of the V-Day board which was under the subject of laughter—because there’s always so much of that when we’re all together. Above is the same group holding Eve’s new book, “The Apology”. Let me quote the Amazon review:

“For anyone delving into this slim but profoundly powerful book, fair warning that it could be triggering. Eve Ensler (The Vagina Monologues) was sexually and physically abused by her father from the ages of 5-10. When he died, he hadn’t taken any accountability for the horrors he visited upon his daughter and the impact it had on her life. The Apology is written by Ensler in the form of a letter from her father to her, outlining his crimes and asking forgiveness–a brutal purging that provides a pathway to Ensler’s healing (and hopefully that of other survivors). With HBO’s Leaving Neverland, the scourge of sexual abuse is very much at the forefront of the cultural conversation right now. The  Apology, out in May, promises to be a potent and extraordinarily compassionate addition to it. “ — Erin Kodicek, Amazon

It’s hard for me to imagine what it took for Eve to drill down into her deepest, darkest recesses and channel her father in the way she did. She says, in the end, it was a true catharsis. What it revealed to me is what it would look like for a perpetrator to actually do the self-work that would make a true apology possible. Humility is an essential ingredient because humility softens the dark, hard place which encases entitlement and ego. It softens the soul. You can tell when a soul is softened enough for a true apology to be made. So, let’s always be prepared to forgive but let’s also pay close attention to whether the one asking forgiveness has done the work.

Another special thing for me has been the film, “Capernaum” (Chaos). I’ve seen it 4 times which is a first. It was my favorite film this year. It’s a Lebanese movie written and directed by Nadine Labaki which won the Grand Jury Prize last year at the Cannes Film Festival. It lacked the budget to do a real PR campaign which is a shame because everyone I have urged to see it says it should have won an Oscar. You can see it on Netflix. I won’t try to tell you the story because I can’t do it justice because there are so many layers to what this film is saying.

Also, on Netflix is the gem of a series, “Our Planet” narrated by the one and only David Attenborough. I see every single nature film I can, and this series has images that are astounding and never before seen. It also makes the case for the interconnectedness of things better than it’s ever been made. I wish our president would watch it.

And just to end on a light note, here are some photos of me at a recent L’Oréal shoot basking in a bathtub filled with peonies and rose petals with Helen Mirren teasing me, my team glamming me and Tulea looking on. 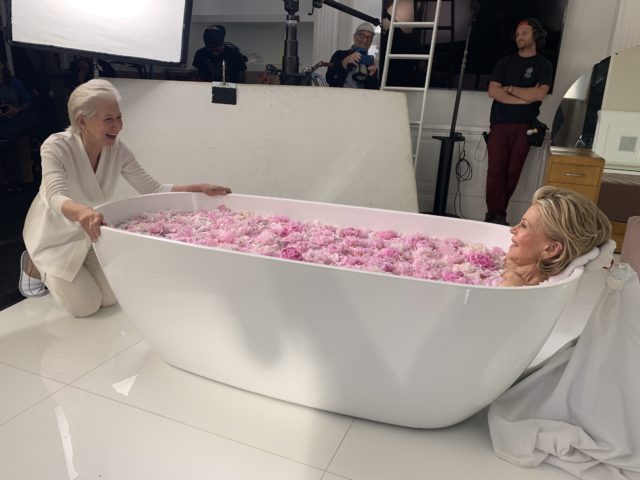 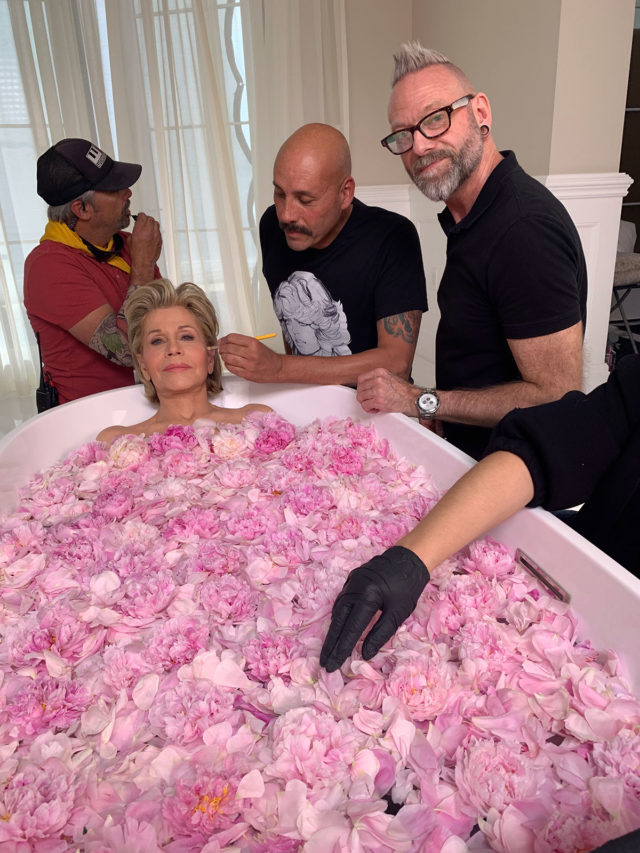