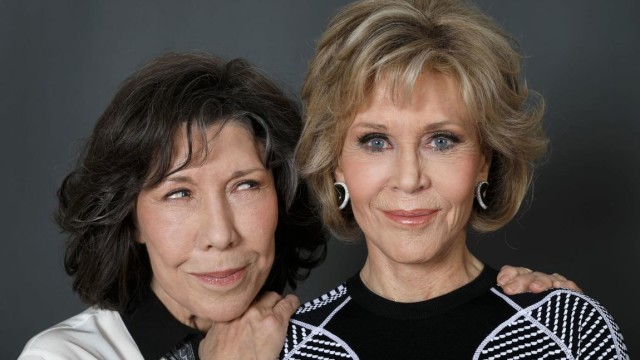 Jane Fonda and Lily Tomlin are the kind of ladies who lunch while talking frankly about bionic body parts and joint diseases. At least that’s the case today.

“I have a fake hip, a fake knee,” Fonda says. “I’ve got so much metal in my back. I have a fake thumb. I have osteoarthritis.”

“I have osteoarthritis and these joints poke out,” Tomlin adds, flexing her hands to demonstrate. “My hands are just ruined. I used to have lovely, graceful hands and now they’re kind of like a kielbasa.”

“They work, though,” Fonda reminds her.

Sitting side-by-side at a Hollywood hotel restaurant before the recent holidays, the longtime friends — all too familiar with how pervasive ageism is in the entertainment industry, particularly for women — are deep in conversation about the privilege of not having to slow down. Fonda, at 80, and Tomlin, at 78, are multiple seasons into their Netflix buddy comedy, “Grace & Frankie,” on which they star and executive produce. The pair are both nominees at this weekend’s Screen Actors Guild Awards

“Listen, to be 80 years old and on a steady job — that’s something,” Fonda says.

“And we love it,” Tomlin says.

“I don’t care how early in the morning I have to be there,” Fonda adds. “I love going into the studio and going to my trailer and working.”

In “Grace & Frankie,” created by Marta Kauffman (“Friends”) and Howard J. Morris (“According to Jim”), Fonda and Tomlin play two seventy-something sort-of friends who become roommates and eventual besties after their husbands, Robert and Sol (Martin Sheen and Sam Waterston, respectively), reveal they are gay and leave the women to marry each other.

If “Golden Girls” broke new ground in the mid-80s/early-90s for its portrayal of senior women as complex — and sexual — beings, then “Grace & Frankie” is doing its part to help ensure nuanced depictions of older women carry over to the Netflix generation. 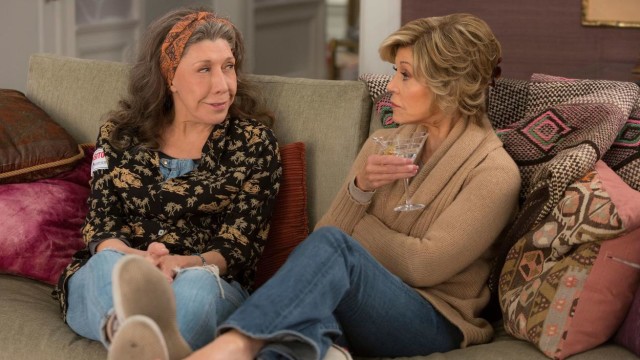 Beyond the laughs and quirky shenanigans of the odd couple friends and their families, the comedy bakes in issues that affect people late-in-life, such as assisted suicide, dementia or the reality that funerals are now a more frequent part of one’s calendar. And it has kept the light shining on older women as sexual beings. The third season saw the friends launch a business selling wrist-friendly vibrators for the elderly.

“It really has to do with what happens when your age becomes a betrayal,” Kauffman said. “The big thing is really coming to terms with ‘What does it mean to be this age? What am I still capable of doing? What do I want for myself at this age?’”

This full-grown form of coming of age, the transition from being an adult to a senior, and the mental and physical quandaries it presents are something Fonda and Tomlin acknowledge they have long contemplated, and have come to peace with, on their own. Death included.

“I know the worst is yet to come, in terms of deterioration,” Tomlin says. “I’ve come to accept that … I’ve been conscious of that for my whole life in a way.”

“I’m a believer in intentional living,” adds Fonda, a recent honoree at the Brandon Tartikoff Legacy Awards which recognizes individuals who’ve made significant contributions to the industry. “This is the last stage of my life, and I don’t want to get to the end with a lot of regrets. There’s always some regrets, but I believe in envisioning dying. We never know how we’re going to die, but I imagine I’m in bed and I’m surrounded by loved ones. And I have to earn that. I have to make sure that I mend the wounds, that there’s healing that goes on.” 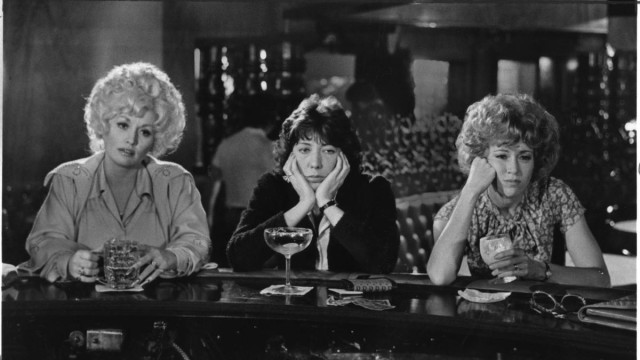 Dolly Parton, Lily Tomlin and Jane Fonda in a scene from the 1980 movie “Nine To Five.”

Dressed much in the way their respective characters might be — Fonda more streamlined, Tomlin more bohemian — the two arrived to the restaurant separately, embracing each other with loving “I’ve missed youuuu!” greetings. The pair, who met more than 30 years ago after Tomlin’s one-woman show, “Appearing Nitely,” and later joined forces in the ‘80s hit “9 to 5,” carry on like this is a catch-up session. The conversation shifts from the personal — Fonda mentions she stayed up until midnight wrapping Christmas gifts and Tomlin reveals she can’t make Fonda’s birthday gathering because she’ll be performing in Tacoma, Wash. — to the cultural, weighing in on the hard-to-ignore reckoning in Hollywood.

“I think it’s a turning point,” Fonda says. “I don’t think this is going to go away. I think women are really ‘woke’…First of all, that the women are being believed is the most important.”

“I do think the reason that it became so big so suddenly is because the women were white and famous,” Fonda continues. “African American women have been speaking out about sexual harassment and violence in the workplace way longer than we have, way even before Anita Hill.”

They both say they’ve experienced inappropriate or questionable remarks in their storied careers but not behavior that would rise to the level of recent accusations leveled against Harvey Weinstein.

“There’s a lot that’s going to be happening. And I think that it will speak to the root cause of all this, with systemic change,” says Fonda.

It gets the pair talking about the power of women banding together, referencing the Women’s March of 2017, which came a day after Donald J. Trump was sworn in as the 45th president and served as an act of resistance to the current administration. But resistance isn’t enough, they say.

“We have to diverge the river,” Tomlin says before adding: “But on a pure level, to see women coming together and having each other’s backs … it’s just amazing.”