Had a blast in Chicago this weekend, with friends, family and Cinema Chicago, but came home and went right to work on my next film. At some point I hope to write more, but in the meantime I’d love to share this piece 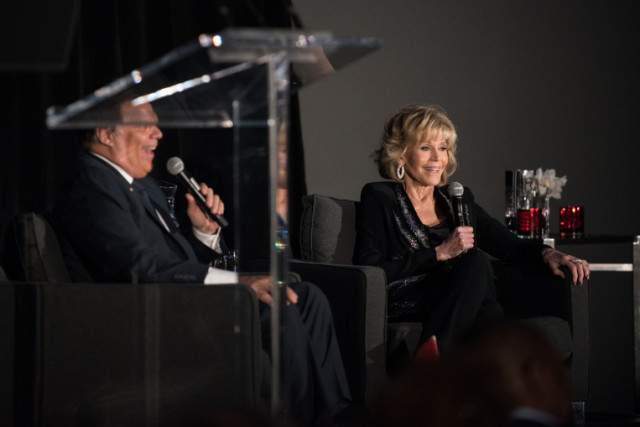 Jane Fonda speaks with Richard Roeper as part of a tribute to the actress on July 29, 2017 at the Radisson Blu Aqua Hotel. | Max Herman/For the Sun-Times

Before receiving the award, Fonda talked with Richard Roeper, film critic for the Chicago Sun-Times, about her career. 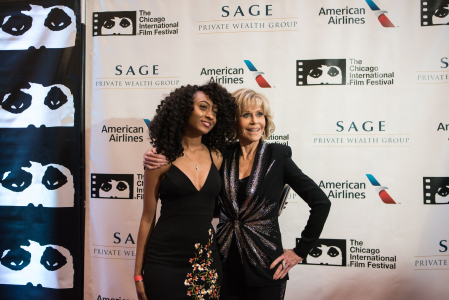 Though “Klute” and “Coming Home” won awards, Fonda said the role that stuck with her most was the character of Chelsea Wayne in “On Golden Pond.”

Fonda got the chance to act opposite her father, Henry Fonda, and Katharine Hepburn, who helped her during a scene even though the two had a difficult relationship.

“When it came time to shoot [my main scene] I was as dry as a tent and I didn’t know what to do,” Fonda said of the scene where she tries to repair her relationship with her father.

“I turned my back to the camera and I looked up and, crouching in the bushes, [Hepburn] leaned forward and said ‘you can do it.’”

Fonda’s friends and costars, including Robert DeNiro, Robert Redford, Lily Tomlin and Geraldine Chaplin, sent their congratulations for her award and heaped praise on her acting career.

The actress’ roles in TV were also mentioned. Her roles as Leona Lansing on “The Newsroom” and Grace Hanson on “Grace and Frankie” are two of her more recent roles.

Of her role in “Grace and Frankie,” Fonda said that she was happy to be doing it.

“For a long time I’ve wanted to give a face to older women and show we’re not the stereotypes people think we are,” she said.

Her role as Judy Bernly in “Nine to Five” had interesting things to say about the workplace in the 1980s, Roeper said.

The movie was initially supposed to be a dark comedy, but turned into a comedy once Lily Tomlin was added. Fonda also said the movie was unusual because the song Dolly Parton, who also starred in the film, wrote for it, became “the anthem for a movement.

“It had a big effect on what working women in offices were doing around the country,” she said.

Though the night was a look back, Fonda is looking forward. She’ll be in another movie with Robert Redford, called “Our Souls At Night,” that’s set to premiere in fall at the Venice Film Festival. She’s also starting work on a movie called “The Book Club” on Monday. 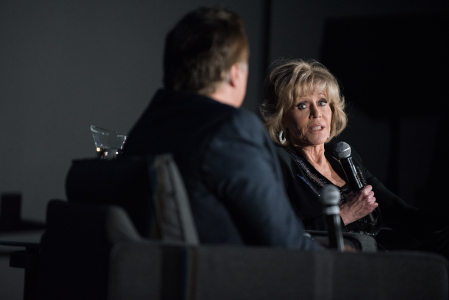 Jane Fonda speaks with Richard Roeper as part of a tribute to the actress on July 29, 2017 at the Radisson Blu Aqua Hotel. | Max Herman/For the Sun-Times

Fonda tries to pay it forward by educating younger actors but feels it’s difficult because she still feels like a newbie, she said, since she left show-business for 15 years and returned at the age of 65.

When asked what roles lingered with her she said “On Golden Pond” and her role as Gertie Nevels in a show called “The Dollmaker.”

When asked how she’d like to be remembered, she smiled.