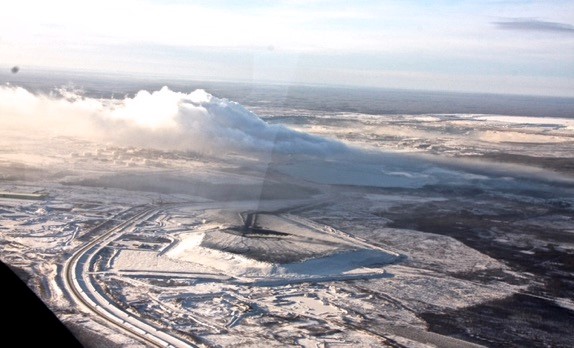 I recently learned from an indigenous friend in Alberta, Canada, that Prime Minister Trudeau has approved 2 new pipeline expansions. One would bring the most polluting tar sands oil to the harbors of British Columbia and the other would bring the oil to Wisconsin thus violating Canada’s commitment to Indigenous rights and reconciliation and possibly dooming the Paris Climate Treaty Goals. Not only that, he is apparently considering joining with the U.S. President-Elect to reopen the Keystone XL pipeline. 99% of climate scientists agree that if there is any hope of meeting the Climate Treaty goals, there can be no new mining or drilling of fossil fuels. The reserves in already-operating oil and gas fields in Canada and in the U.S., even without coal, are sufficient to carry us through a transition period.

I was shocked at this news because Trudeau had positioned himself as a climate hero while he was at the Paris Climate Summit and has committed his government to respecting First Nations people’s right to free, prior and informed consent to proposed projects that may affect the lands they customarily own or use. Over 120 First Nations and Tribes on both sides of the Canadian and U.S. border have signed a Treaty stating their official opposition to the tar sands expansion.

I feel that what the Prime Minister has done has such far-reaching consequences that I decided to travel to Alberta and add my voice to those who oppose the pipeline expansion. Together with Barbara Williams, an actor/singer who was born in British Columbia and is half Sioux, I traveled to Fort McMurray in Alberta where the tar sands are. 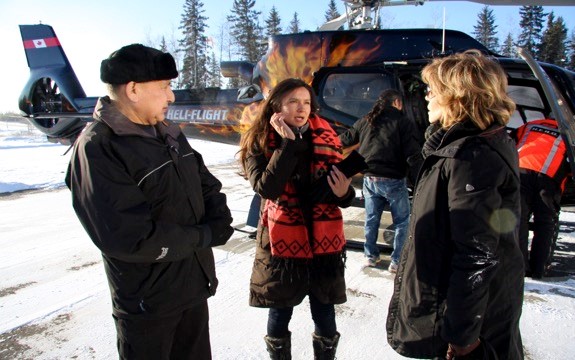 It was 40 degrees below zero when we flew over the tar sands in a helicopter with Grand Chief Stewart Phillip, president of the Union of British Columbia Indian Chiefs, Chief Allan Adam of the Athabasca Chipewyan First Nation, and Melina Laboucan Massimo, Greenpeace Canada organizer and member of the Lubicon Cree First Nation. 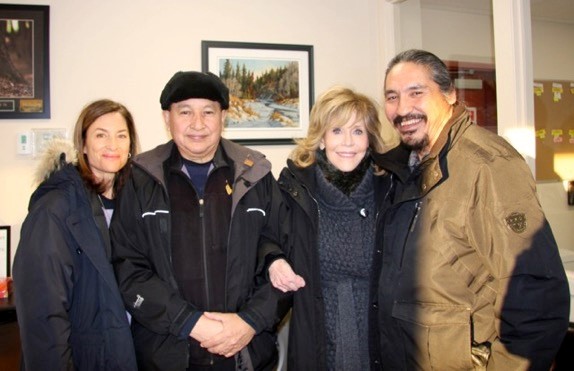 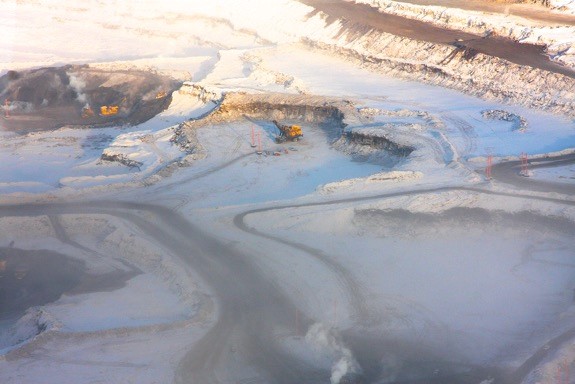 The forests and skin of the earth has been stripped away as far as the eye can see. 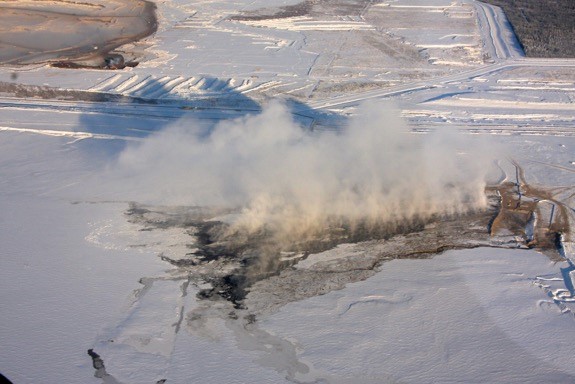 Snow covered much of the tailing ponds and pits but steam from the processes and from the ponds was everywhere. 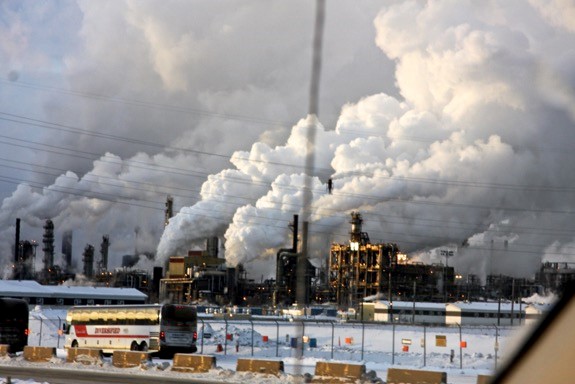 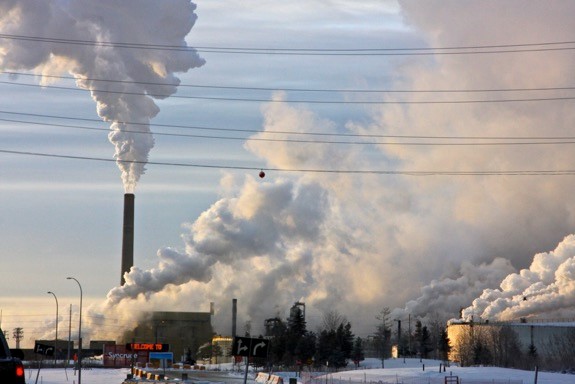 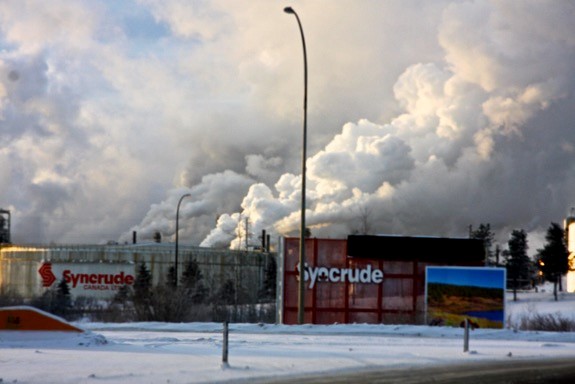 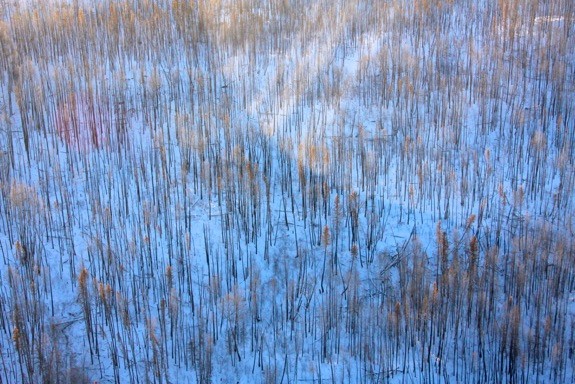 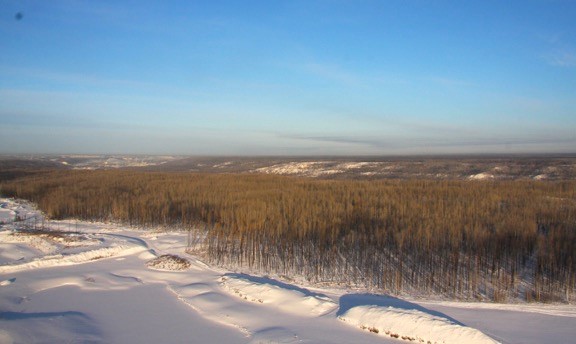 There was also ample evidence of the devastating fire that swept Ft McMurray last year, itself the result of the increasingly frequent perfect storms that result when natural El Ninos are supercharged by climate change. Many workers were laid off after the fire in large part because of the drop in the price of oil. 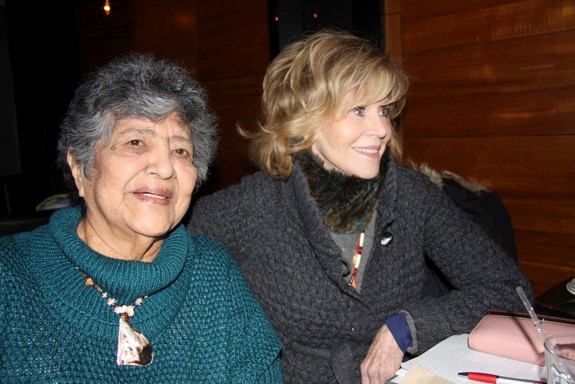 I lunched with 89-year-old Violet Cheecham Clarke and her daughters. Violet, a Woodlands Cree, told me how she grew up on these lands, drinking water from the Athabasca River, living off the fish and game that she and her family hunted. Now the river is falling, sand bars threaten the boats and the water is undrinkable. Its fish often have tumors now as do the moose and other animals they rely on. Now her people must depend on water delivered to them in plastic bottles. So much of the land has been contaminated or clear cut that the Indigenous people can no longer pick berries and herbs or find healthy food. I know people who have family and friends that have worked in the tar sands and they, too, have had health consequences.

Even if we start right now to do everything needed to made a managed and compassionate transition to a low-carbon economy, climate change that we are already experiencing will greatly worsen causing economic turmoil, a far greater refugee crisis, more forest fires like the one last year that brought such heart-breaking devastation to Fort McMurray and to Northern California, longer droughts, more storms, hurricanes, tornadoes, flooding, the disappearance of entire island nations and coastal cities and the extinction of numerous animal and plants species. And that’s a best-case scenario.
For centuries, first Nations peoples have been telling non-indigenous people how to live in relationship to the land rather than to see the land and its natural resources as commodities to be bought and sold and used up. We did not listen and now we are reaping what we have sown. 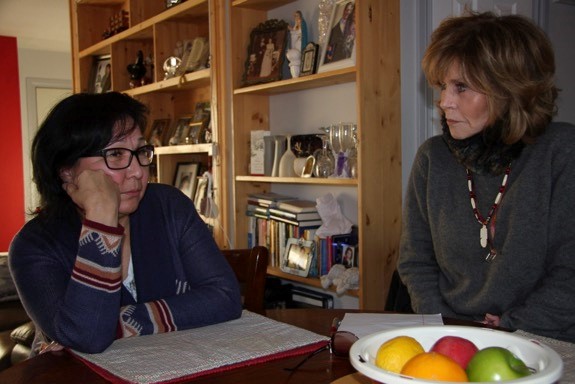 We met with Cecilia Fitzpatrick, an indigenous Dene woman from Fort McKay First Nation which is completely surrounded by the tar sands. Cecilia opposes the tar sands expansion. She ran for tribal chief of and lost by one vote! The man who won the election supports the tar sands expansion and his name is constantly being used to create the impression that Indigenous people support it. His support of expansion should come as no surprise. Wherever people are in economic and social crisis they will do what’s necessary to survive. It’s not their fault that the only economic opportunities that exist in t territories are in the dirtiest industry. I’m told that unemployment among oil field workers is at 9% which is awful. This isn’t because of environmentalists, however. It’s because of the drop in oil prices and cutbacks. It was surreal sitting in Cecilia’s home which is being surrounded by the new community center, paid for by the oil companies. I get it. These and other sorely needed infrastructure not to mention well-paying jobs are hard to resist. In the non-oil-supporting tribal areas unemployment is 90%! Poor people are perfect targets for the extractors (among others) and pitting us against each other is their strategy. We all share the same enemy and unity is our best weapon. They’re afraid of that.
What’s so sad is that there is another way. It requires wartime-type commitments of policies and resources from developed Nations like the U.S., Canada, China, etc. It requires ending the huge subsidies our governments give to the fossil fuel industries (Funny how those wealthy oil guys hate welfare for others yet they themselves depend on massive petrol welfare that taxpayers subsidize) and investing them in renewable sources, housing, transportation, renewables, healthcare, social assistance and education services – the very low-carbon sectors that knit our society together, that create social fabric rather than environmental catastrophe – these industries create dozens or even hundreds of times more jobs than oil and gas. 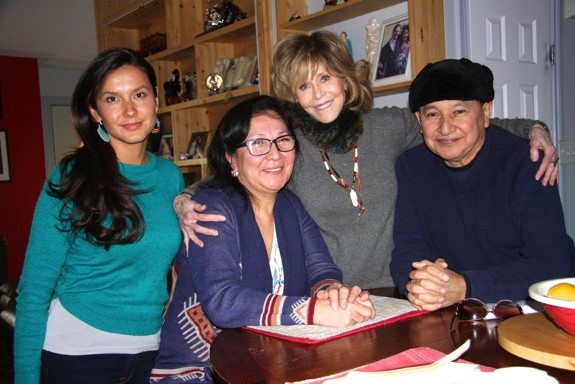 We need the kind of commitment JFK made when he was determined to put a man on the moon. A managed transition to a low-carbon economy that protects oil, gas and coal workers and their families and communities is absolutely possible. Denmark, Nicaragua and Germany are doing it. Germany already employs over 350,000 people in their renewable energy sector. Ontario, Canada, created 35,000 jobs in just a few years like this. The Oil companies and the politicians they’ve bought off want us not to know this. They want us to believe the alternatives are far in the future. Wrong. It’s tragic that our president elect doesn’t seem ready to commit to this job-intensive transition. That’s how he could fulfill his promise of jobs to the folks in the rust belt. He could demand policies that would train the laid off and underpaid workers in building renewables and mass transit projects, weatherizing, etc and turn the rust belt into the green belt 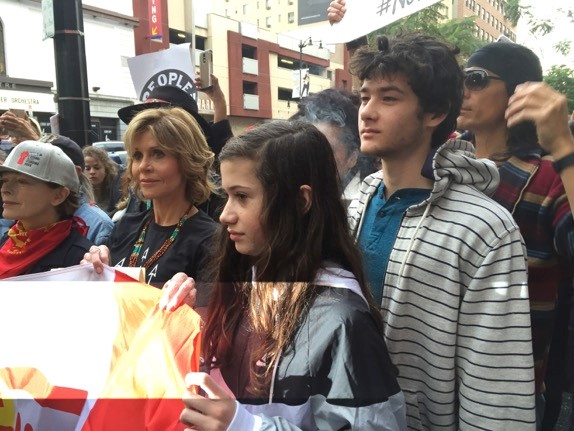 Here I am marching to stop DAPL with my Grandchildren.

In Canada (what happens there impacts all of us)

Whatever you give will be matched up to $500,000 and used to help First Nations stop the new tar sands expansion.

To help the organization that works on Climate Change in Canada by spreading awareness, increasing organizing capacity and training and implements renewable energy projects in Indigenous communities 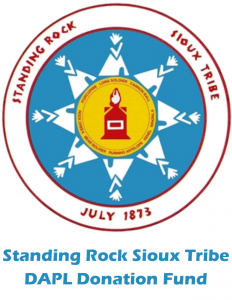 Donations will be used for legal, sanitary and emergency purposes!

Please do not mail physical goods to the Standing Rock Mailing Address!