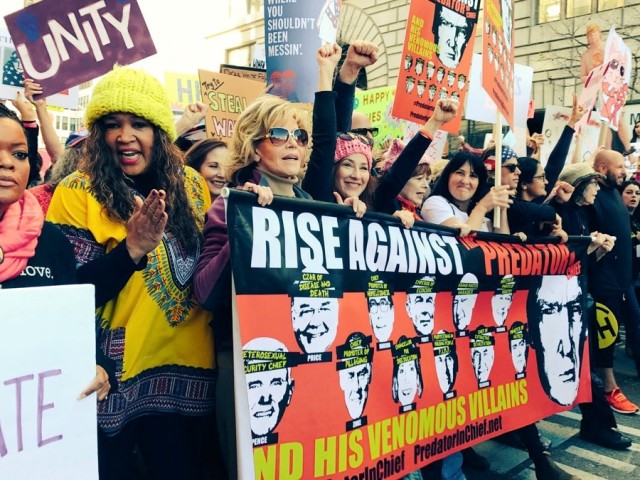 I marched in Los Angeles Saturday where we were told there were as many as 750,000 people. It felt like it. I can’t prove it but when I stood on the stage to speak there were masses of people as far as the eye could see and that didn’t even include the masses who filled all the side streets and were out of sight. It was awesome to be among so many people, all supporting each other, no pushing or negativity and the signs and banners were diving and original. Don’t let anyone write this off as some liberal elite event. There were significant marches in all 50 states, and on every continent! Millions came together in peace, and pledging solidarity.

I was thrilled that our march featured many city officials as participants. Rather than flanking the streets with police in riot gear Eric Garcetti, our Mayor spoke in front of a City Hall draped in American flags. 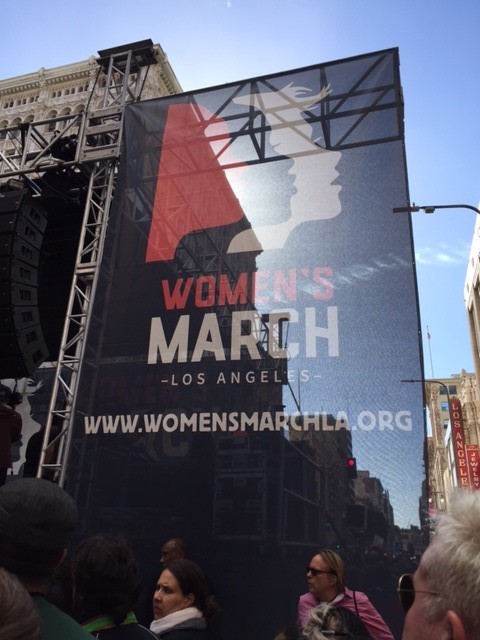 There were two stages set up. One at City Hall another a few blocks away on Hill Street. We marched Starting at Pershing Square from 10am until 12pm snaking, weaving shoulder to shoulder through downtown Los Angeles. People were still arriving when I took the stage around 1PM at Hill Street. The Metros were filled to capacity. I’m told passengers in Hollywood had to head on the North bound trains and ride the entire route in order to make it downtown. Some stations ran out of tickets to sell and some of the stations stations opened the turnstiles and let passengers ride for free. Traffic in some areas was a complete standstill. 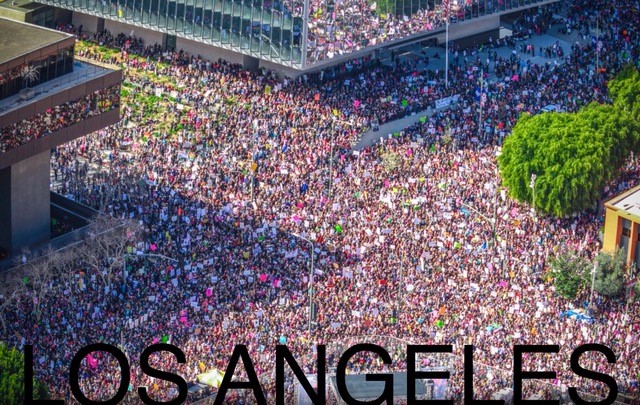 It was quite a crowd, but if everyone who wanted to come could’ve gotten there we probably would’ve been over a million people. It was so nice to see men in the march as well as millennials and young children. It really spanned a wide range of sexes, ages and ethnicities. A Troupe of Muslim dancers were preparing to perform. 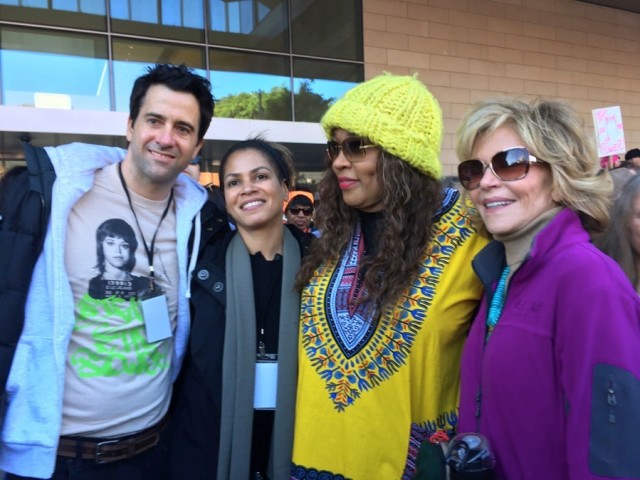 I marched with many women friends and my son and daughter-in- law. I always feel better, safer when they are close. 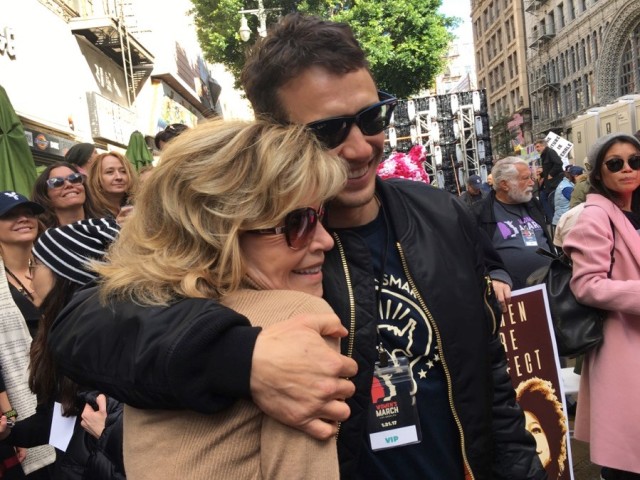 And I hugged James Franco. I think he’s such a brave, original talent across a lot of disciplines. I was so glad he was there. As was Barbra Streisand, Kerry Washington, Miley Cyrus, Jackson Brown and so many more. 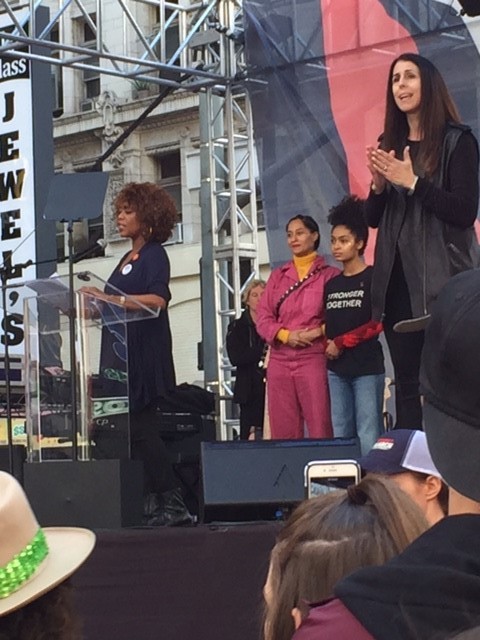 Natalie Portman, far into a pregnancy, gave a terrific speech about how awesome and mysterious women’s bodies are and that a mostly white, male government should not be allowed to tell a woman what she can or can’t do with her body. She said that such a monoculture government was a problem, calling it “taxation without representation.” Alfre Woodard read a poem called “Sweet Honey in the Rock” and boy did she rock it! 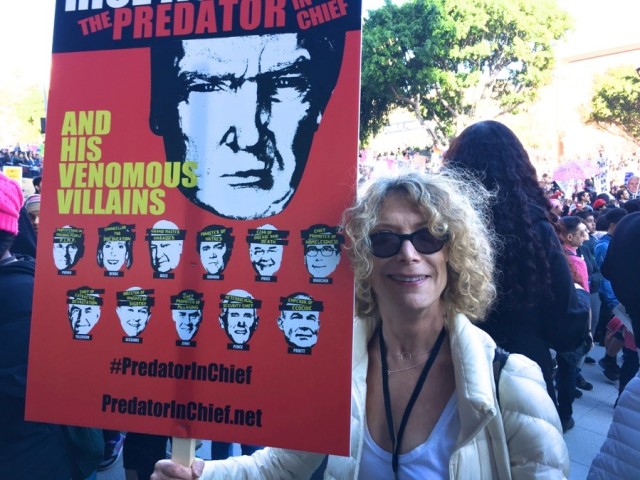 We carried large banners and posters saying “Rise Against the Preditor-in-Chief.”

In my remarks I emphasized the importance of refusing to normalize or legitimize him. Fake news, false promises and foreign interference in our election renders his election illegitimate. I said that on the national level, we need to play defense– systematically resisting, disrupting and blocking the Predator-in-Chiefs every attempt to roll back our democratic rights and freedoms.

On state and local levels we must be on the offense: training and supporting organizers who need to be out in our communities for the next 4 years and beyond, bringing people together behind a shared vision of true Democracy–political, social and economic–that everyone can see themselves reflected in. We need to build an intersectional Movement of movements. We need to identify and groom righteous women to run for office–school boards, county commissioners, city councils, state legislatures. We must work locally to take back our government where we live. State governments will, more and more, be determining much that affects our federal policies and thus our lives.

I called for an end to policies that maintain the Wall Street centered economic status quo that enriches the few and deeply harms working people and the poor and the middle class. And like all the other speakers I called for solidarity across race and class.

It was a good day, and uplifting, hopeful day. There has to be many more like these. We can’t stop. We can’t stand down we must rise up and resist — don’t agonize, organize!

This could very well be the start of something. Women are going to continue to organize visit womensmarchla.org for updates.

Here are some more photos from the incredible day 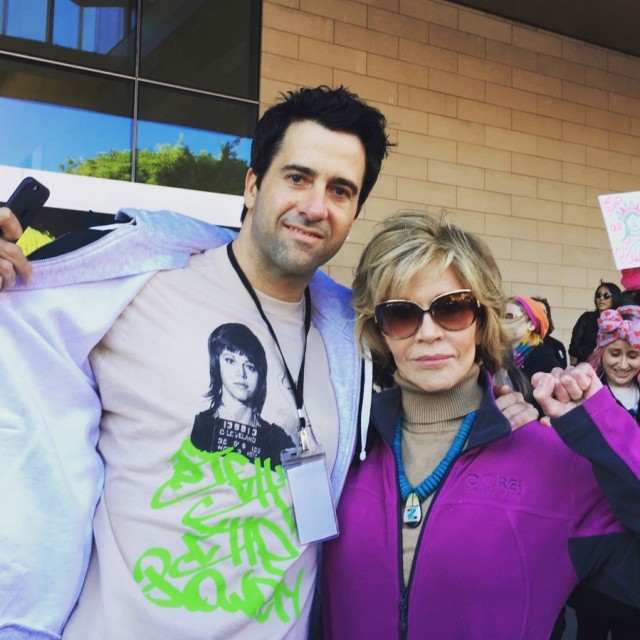 My son wearing a “Supreme” Tshirt with yours truly. 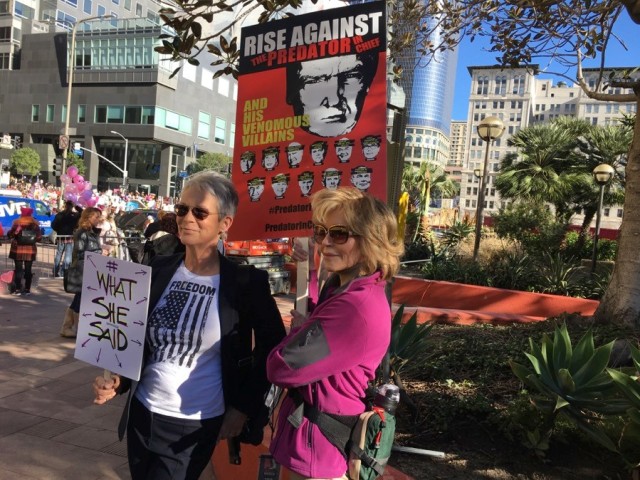 Before the March with Jamie Lee Curtis. 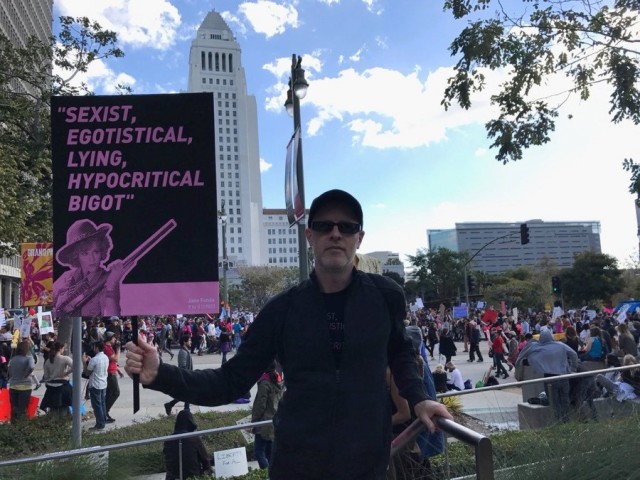 A friend emailed me this photo, wish I could have run into this man. 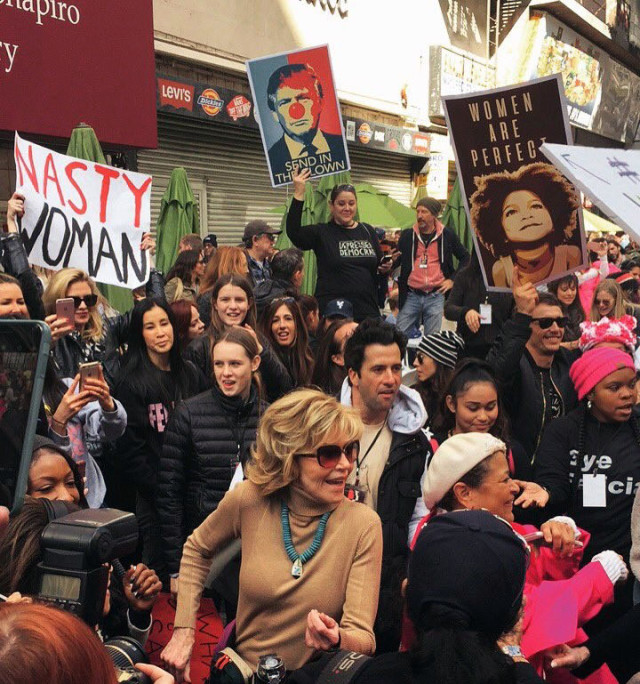 Never pass up an opportunity to Dance with the one and only Debbie Allen! Debbi also spoke reminding us that “freedom must prevail!” 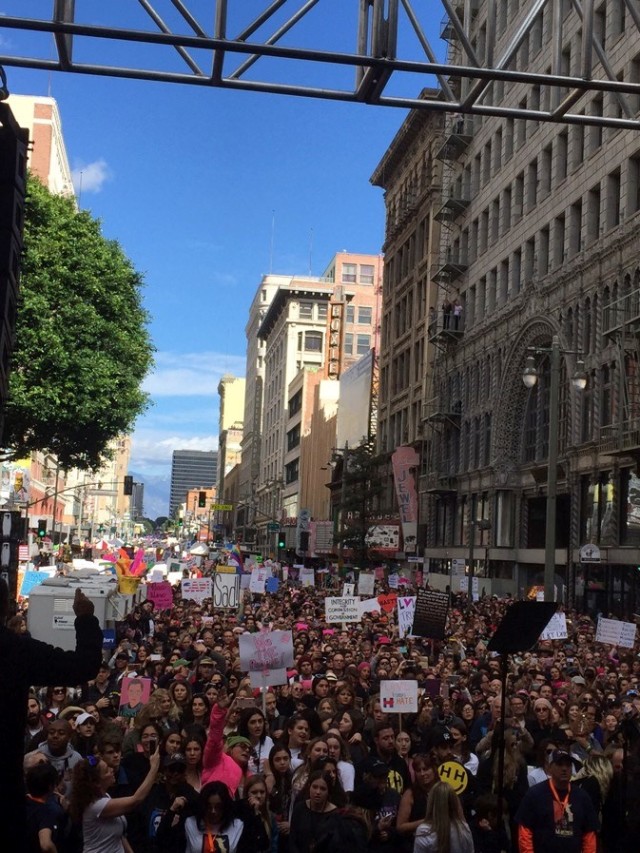 The view from the stage on Hill Street. 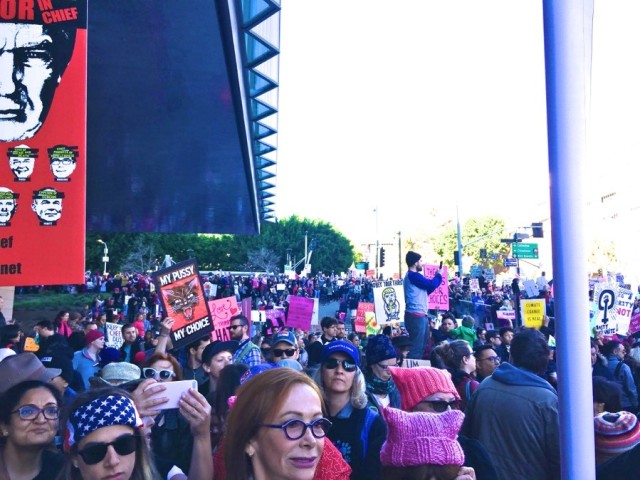 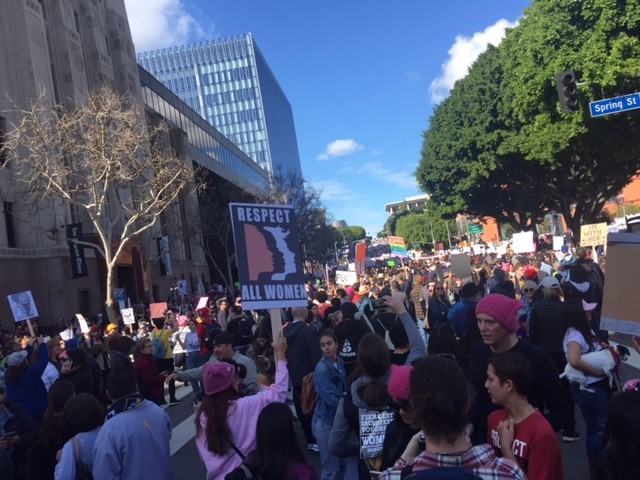 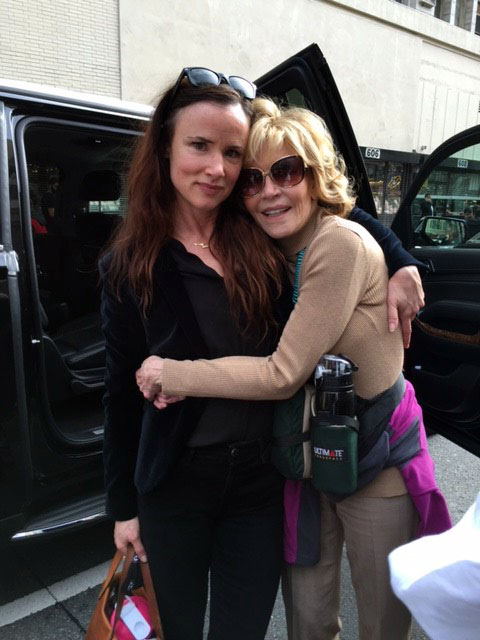 With Juliette Lewis who sang a rousing rendition of U2s “In the Name of Love” with the Edge. 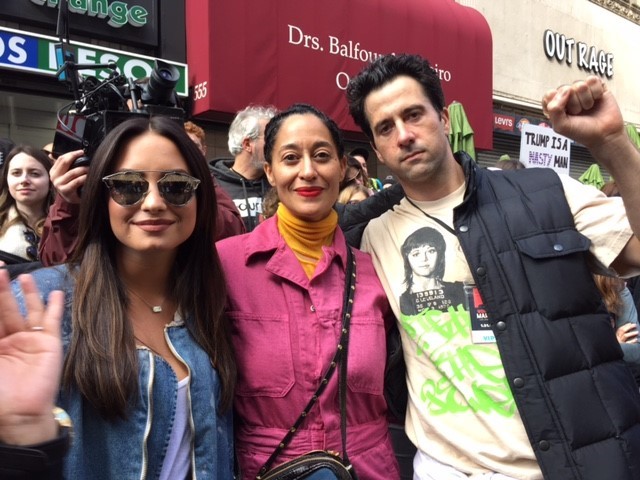